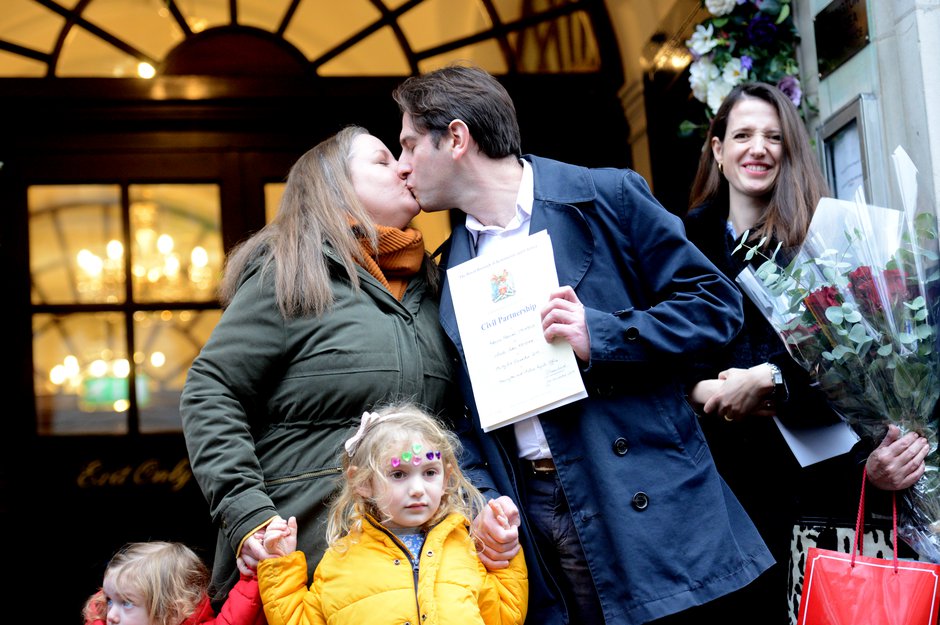 A heterosexual couple who won a Supreme Court battle to have a civil partnership rather than a wedding celebrated their legal union today.

Rebecca Steinfeld and Charles Keidan, who campaigned for mixed sex civil partnerships, were among first to register at Kensington and Chelsea Register Office in west London.

The couple walked into the Register Office this morning with their two daughters Eden, four, and two-year-old Ariel.

Charles and Rebecca’s parents and their two children attended the partnership as well as the couple’s witnesses and long term friends Melanie Pilbrow and Oma Sallnger.

The couple had a basic civil partnership costing just £46 with around a dozen guests present.

Speaking after the partnership ceremony, Rebecca said: “It feels fantastic on a personal and a political level.

“We are feminists and we see each other as civil partners.

“We did not want to have to get married, become Mr and Mrs, husband and wife.”

The couple stood on the steps of the Register Office where they told of their love for one another and their success in ending the unrivalled position of marriage.

Rebecca said: “We’ve just signed the Register here at Kensington and Chelsea Register Office, and have formed a civil partnership with each other...finally.

“Today, as one decade ends and another dawns, we have become civil partners in law.

“Our personal wish to form a civil partnership was rooted in our desire to formalise our relationship in a more modern way, focused on equality and mutual respect.

“So today is a unique, special and personal moment for us - a moment when we have been able to affirm our love and commitment to one another in the company of our beautiful children, Eden and Ariel, and close friends, and have that love and commitment given legal recognition in the way that best reflects who we are, what we love and the life we value.”

She added: “Thousands of other people across the country will be forming civil partnerships of their own in the coming decade.

“What began as a personal issue has become so much more than that. There is now a space for new, more modern possibilities for people to express their love and commitment to one another.

“The urgent need to reform cohabitation law so that social policy keeps up with the reality of family life in modern Britain has been brought into greater focus.

“And by ending the unrivalled position of marriage we have helped to create the space for deeper discussions about giving legal recognition to other types of personal and caring relationships, such as those between friends, siblings and co-parents.

“There’s no social script to civil partnerships and you can do whatever feels right for you. Some couples will want to celebrate with an elaborate ceremony and big party. But the beauty is that you can form them at minimal cost, without fanfare.

“Charlie, I hope that you and I, and Eden and Ariel, enjoy many years of civilly partnered life together! I love you.”

Her partner Charlie said the couple’s mental health and ability to be civil to one another was tested through their long journey which they finally succeeded in “against all odds.”

He said: “Becca and I have shared much joy, and supported each other through the strains of life, and loss.

“We have gained so much through the years of trying to become civil partners – new friends, skills - even notoriety - but also confidence and belief in our own agency and capability.

“Against all odds, we succeeded in a legal battle against the government and then they did what we asked for all along. Not many people can say that.

“But we both know that with everything gained, some things risked being lost, or at least un-spoken. Through this long journey and hard fought battle, our mental health has suffered, our ability to be civil to each other has been tested, and, crucially, we missed out on that important moment to state clearly what we mean to each other - not just what we’ve become in the eyes of others.

“So we are grateful to, and wish to thank, everyone who has supported us on this journey so that we could finally do that in private a few moments ago.”

Ben Rich, the couple’s campaign strategist, described Rebecca and Charlie as the couple who changed that.

He said their basic civil partnership registration cost just £46 and has the same legal protection as marriage.

He said: “We are aware of at least 80 and this is the couple who changed that.

“We are aware of at least 80 mixed sex civil partnerships going on today and this is the couple who changed that.

“We think the first that took place today was in Carmarthenshire Wales where the register office did it at midnight.

“We have been running this campaign for tha beat part of five years.

“I have been married for 25 years and recognise people will continue to choose marriage but it comes with a lot of expectations.

“This is an opportunity for them to create their own tradition and they want to show this is a very easy thing you can do.

“If you want to spend the equivalent of a house on a marriage, that is one option but you can also do it for £46 and this is giving you the same legal protection as marriage.

“This is new and we can make this whatever we want it to be and I love that.” 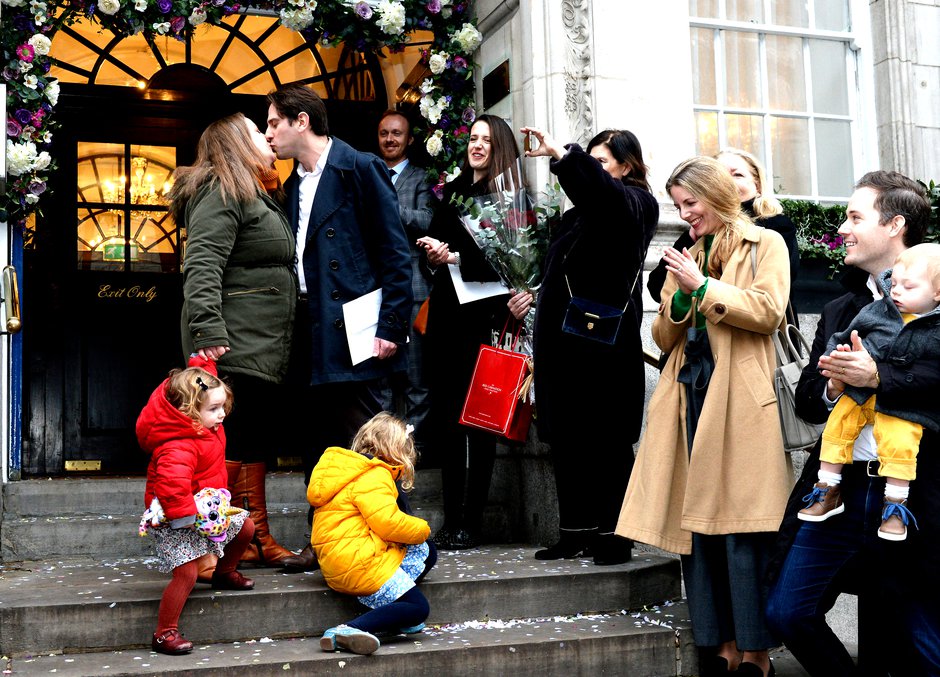 The couple, from Shepherd’s Bush in west London, have two daughters Eden, four, and Ariel, two, whose surname Keidstein is a merger of each of their parents’ last names.

But when Rebecca and Charlie gave notice of their civil partnership, they were told their children would be considered illigitimate and that they would have to reregister their births.

Rebecca, a campaigner and researcher, said: “We were told when we gave notice of our partnership that we would need to reregister the births of our children on the basis any children born before our civil partnership would be considered illegitimate.

“We will not be doing that. We think that is an archaic law.

“We are not sure if we will actively campaign against it but we will not be reregistering the births.”

Rebecca and Charlie, who are both Jewish, met at a lecture about Gaza.

“We wanted to have that legal and financial protection, formalising a relationship of equals.

“We did not feel we could do that by getting married. We felt there would be a lot of social expectation and pressure from a gender point of view and we did not want to have that.

“Sadly it took five years and three court cases but we are here today.”

Charlie said: “The opportunity came to change the law by coming here and trying to form a civil partnership.

“But we were turned away because we were not the same sex and that led to our legal battle and the rest is history.”

The couple said they felt privileged to be able to fight for their beliefs but that it came at a price and took its toll of Charles’ mental health.

Charlie, a magazine editor, said: “It is inevitable. Since we started this we have had two children, we have mixed home multiple times, we are both trying to hold down jobs in charities. Doing these things together obviously comes with huge pressures.

“After we won in court unanimously, after the law changed, it started to feel very very tired in ways I just could not explain. I think I was just burnt out physically and mentally.

“I spoke to the doctor and to my employer and took five weeks off work really just to recover from everything we had been through. It has not just been tough for me, it has been tough for Rebecca as well.

“But it has been good that we have had a chance since the law changed in April to have that period of calm and reflect.

“I don’t regret it but it has been tough, it has come at a cost and at a price.”

Rebecca added: “We lost the high court, we lost at the court of appeal and it was difficult to keep going.

“But we knew we had a lot of people supporting us and it meant a lot to them too so we kept going.

“We has people across the country saying they wanted to be able to form a civil partnership.

“Then we had the Supreme Court’s unanimous five-nil verdict, we felt very vindicated.

“We are very privileged to have been able to take this case up with legal aid. The journey in many ways has been very positive in terms of the people we have met and the insightfulness we have had campaigning.”

When asked what is next in their campaigning, the couple told of further necessary reforms that are close to their hearts.

Charlie said: “There are issues around cohabitation reform and for people who are cohabitants.

“There are 3.5 million cohabitant couples in this country without protection.

“Also, I have been very conscious of the role models we try to be as parents. I have noticed there are no male carers at the children’s nursery - not one.

“We have kept our own names and our children’s names have been fused. We have tried to set a tone in that way. They are family related issues we can address.

“We met at a lecture about Gaza, we are both Jewish, and we feel there are serious issues that need to be addressed about that.”

The couple plan to celebrate their civil partnership with a small group of family and friends at a local pub before Charlie returns to work on Friday.

He added: “I hope Rebecca and I, Eden and Ariel enjoy many years of civil partnership life together.” 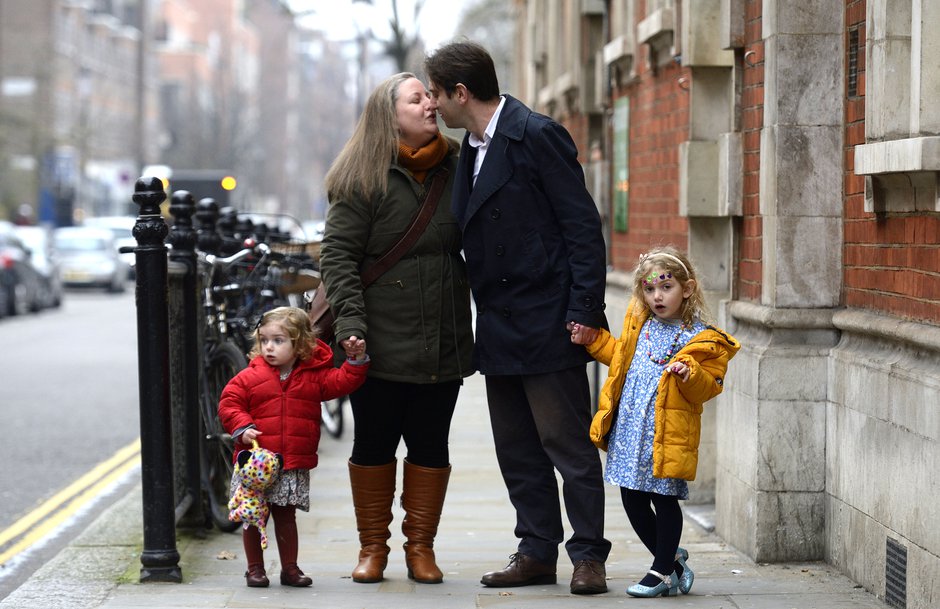 The registrar of one of the UK’s first mixed sex civil partnerships, who married the country’s first same sex couple, described today's moment as 'simple but historic'.

Rebecca Steinfeld, 38, and Charles Keidan, 43, signed the register of their civil partnership at Kensington and Chelsea register office today after five years of legal battles and three court cases.

Steven Lord said it was a real honour to be a part of people’s special day “especially when they have had to fight for the legal right.“

The registrar of 12 years was also the registrar of the UK’s first same sex marriage at Camden’s register office at a midnight wedding in March 2014.

He said: “It was a very simple signing of the register with the couple chosing one of our smallest rooms, but it was a very historic moment.

“It is a real honour to be doing the first same sex marriage and then one of the first mixed sex couple partnerships.

“And it is a real honour to be a part of people’s special day, especially when they have had to fight for the legal right.

“I was the registrar of one of the first same saved marriages in March 2014, I was a registrar at Camden at the time where I did one at midnight.

“And today, Charles and Rebecca signed the register on the first morning of the new legislation so that is a great pleasure.”