A blue whale's heart can beat just twice a minute when it's diving for food - up to 50 percent slower than what was thought possible, according to new research.

Scientists have recorded the legendary beast's huge organ for the first time in the wild. 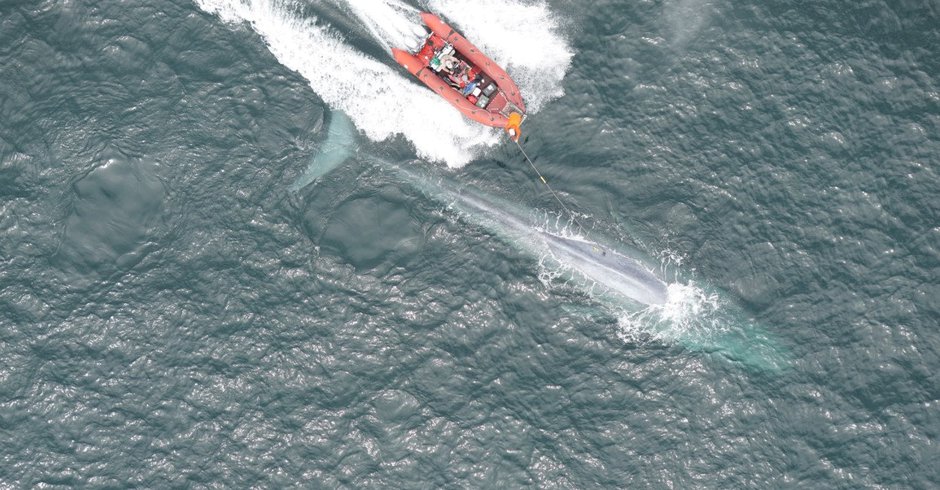 A blue whale's heart can beat just twice a minute when it's diving for food - up to 50 percent slower than what was thought possible, according to new research.

Scientists have recorded the legendary beast's huge organ for the first time in the wild.

They placed a lunch-box sized suction cap on one of them as it swam in California's Monterey Bay.

Electronic sensors inside the neon orange plastic shell revealed how its pulse slows and quickens during diving, feeding and surfacing.

The rate ranges from between two and 37 beats a minute - depending on whether the world's largest creature is underwater or at the surface.

To put this in perspective a normal resting heart rate for an adult human ranges from 60 to 100 beats per minute.

The findings published in Proceedings of the National Academy of Sciences could help save the endangered blue whale - the largest creature to have ever lived.

They show blue whale hearts are operating at extremes limiting the whale's size - and explaining why there's no animal bigger.

About the size of a small car, it weighs around 440lbs - almost a quarter of a ton. The beat can be heard from over two miles away - pumping out 2210 litres of blood each time.

Lead author Professor Jeremy Goldbogen, a biologist at Stanford University, said: "We had no idea this would work and we were sceptical even when we saw the initial data.

"With a very keen eye, Paul Ponganis - our collaborator from the Scripps Institution of Oceanography - found the first heart beats in the data.

"There were a lot of high fives and victory laps around the lab."

Some unusual features might help it perform at these extraordinary margins - adding to our fundamental knowledge of biology and informing conservation efforts.

Prof Goldbogen said: "Animals that are operating at physiological extremes can help us understand biological limits to size.

"They may also be particularly susceptible to changes in their environment that could affect their food supply.

"Therefore, these studies may have important implications for the conservation and management of endangered species like blue whales."

A decade ago Prof Goldbogen and Dr Ponganis measured the heart rates of diving emperor penguins in Antarctica. They had wondered ever since if the same feat could be achieved with whales.

Prof Goldbogen said: "I honestly thought it was a long shot because we had to get so many things right: finding a blue whale, getting the tag in just the right location on the whale, good contact with the whale's skin and, of course, making sure the tag is working and recording data."

The tag performed well on smaller, captive whales, but getting it near a wild blue whale's heart is a different task. 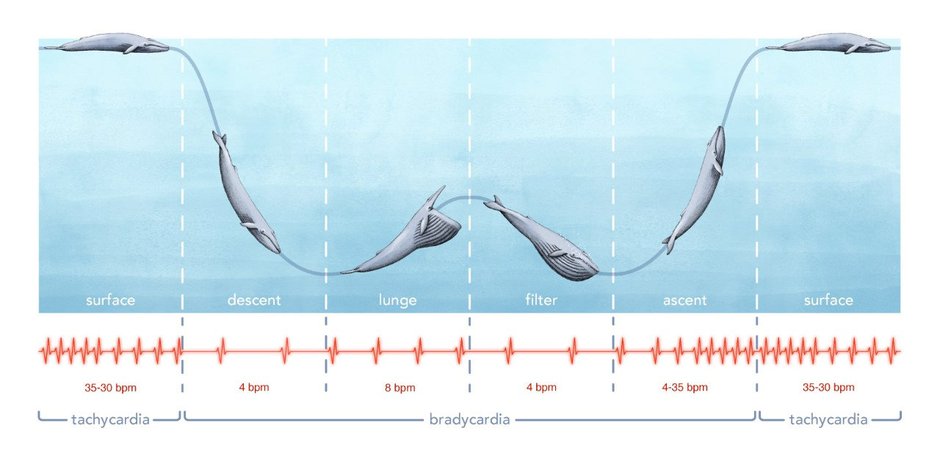 For one thing, wild whales aren't trained to flip belly-up. For another, blue whales have accordion-like skin on their underside that expands during feeding - and one such gulp could pop the tag right off.

Co author Dr David Cade, a member of the Goldbogen Lab who placed the tag on the whale, said: "We had to put these tags out without really knowing whether or not they were going to work. The only way to do it was to try it. So we did our best."

He stuck it on at the very first attempt. Over time it slid into a position near the flipper where it could pick up the heart's signals. The data it captured showed striking extremes.

When the whale dived its heart rate slowed reaching an average minimum of four to eight beats per minute - with a low of two.

At the bottom of a foraging dive, where the whale lunged and consumed prey, it increased about two-and-a-half times - then slowly fell again.

Once the whale got its fill and began to surface, its heart rate rose. The highest - 25 to 37 beats per minute - occurred at the surface where the whale was breathing and restoring its oxygen levels.

The results shocked the team. The whale's highest heart rate almost outpaced predictions - while the lowest was 30 to 50 percent below what was expected.

The researchers think the surprisingly low heart rate may be explained by a stretchy aortic arch - part of the heart that moves blood out to the body.

In the blue whale, it slowly contracts to maintain some additional blood flow in between beats.

Meanwhile, the impressively high rates may depend on subtleties in the heart's movement and shape that prevent the pressure waves of each beat from disrupting blood flow.

Looking at the big picture, the whale's heart is thought to be performing near its limits.

It sheds light on why no animal has ever been larger - as the energy needs would outpace what the heart can sustain.

The magnificent marine mammals rule the oceans at up to 100 feet long and upwards of 200 tons. Their tongues alone can weigh as much as an elephant.

The researchers are now adding more devices to the tag including an accelerometer, which could help them better understand how different activities affect heart rate.

They also want to try their tag on other members of the rorqual whale group, such as fin whales, humpbacks and minke whales.

Dr Cade said: "A lot of what we do involves new technology and a lot of it relies on new ideas, new methods and new approaches.

"We're always looking to push the boundaries of how we can learn about these animals."