Gemma Ashdown, 34, was devastated when her partner, Jonathan, 27 - known as Jono - passed away after suffering a bleed on the brain in September. 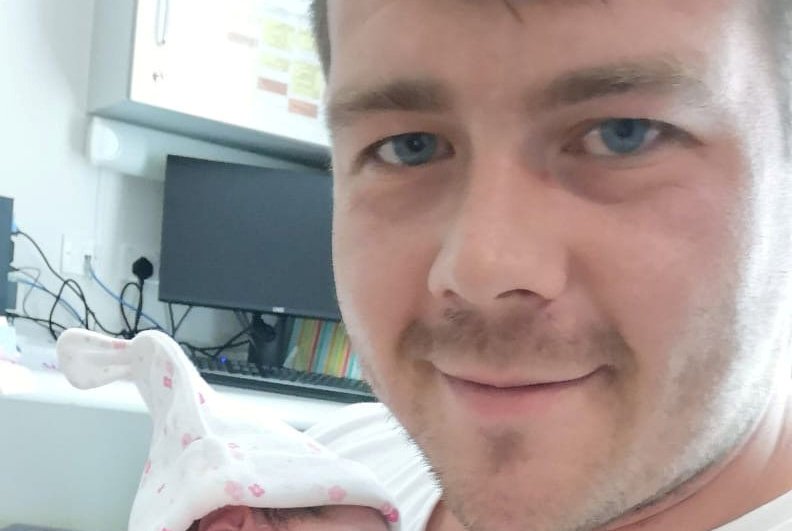 A dad who died after a bleed on the brain has been dubbed a hero after he saved the lives of FIVE people by donating his organs.

Jonathan Ashdown, 27, donated his heart, pancreas, kidney and his liver - after it was split in two - following his death.

The dad-of-three suffered from a tangle of blood vessels connecting arteries and veins, which caused a bleed on the brain.

He was diagnosed just five days after the birth of daughter Willow, and despite two brain operations died just two months later.

Devastated wife Gemma, from Tonbridge, Kent, made the brave decision to donate his organs to help others.

She has now been told in a moving letter from the Blood and Transplant Service how his organs saved the lives of four men and a young boy.

"He was so young and had so much to live for. It's hard to imagine how we're going to go on without him, but it brings us so much comfort to know how many people he's gone on to save.

"When I saw the letter from the donation organisation it filled me with pride.

"I'm so happy Jono has such an incredible legacy - as such an amazing dad, I'm especially thrilled about the fact that he helped a little boy." 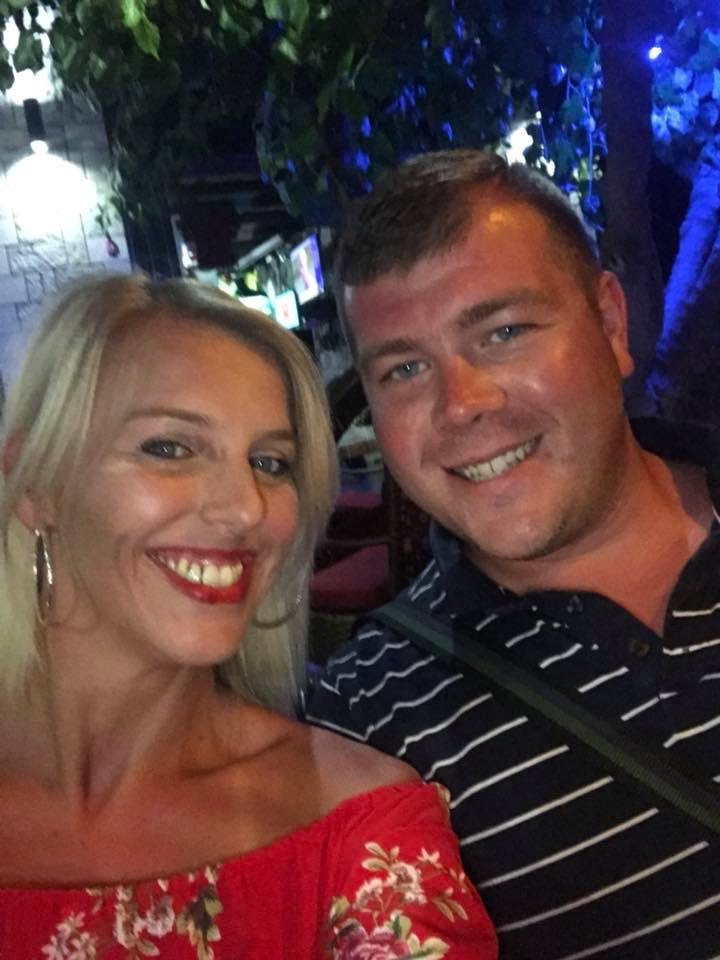 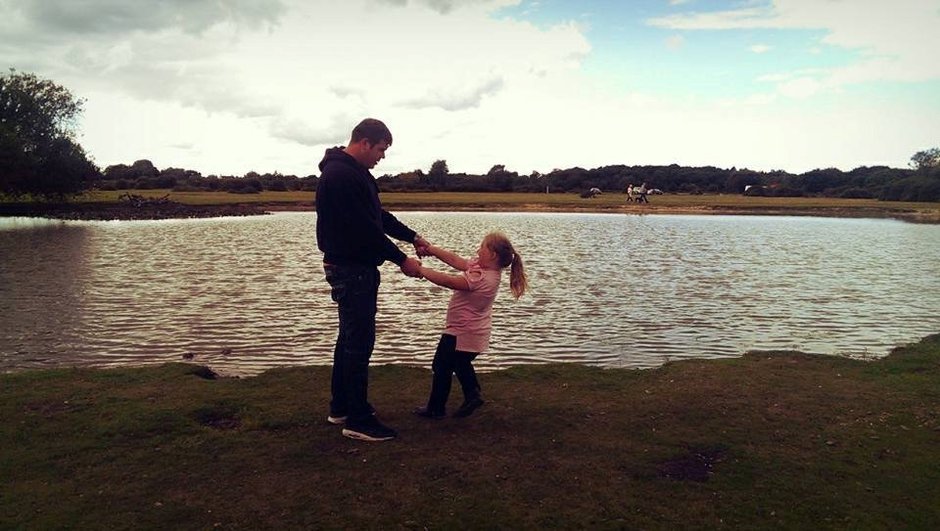 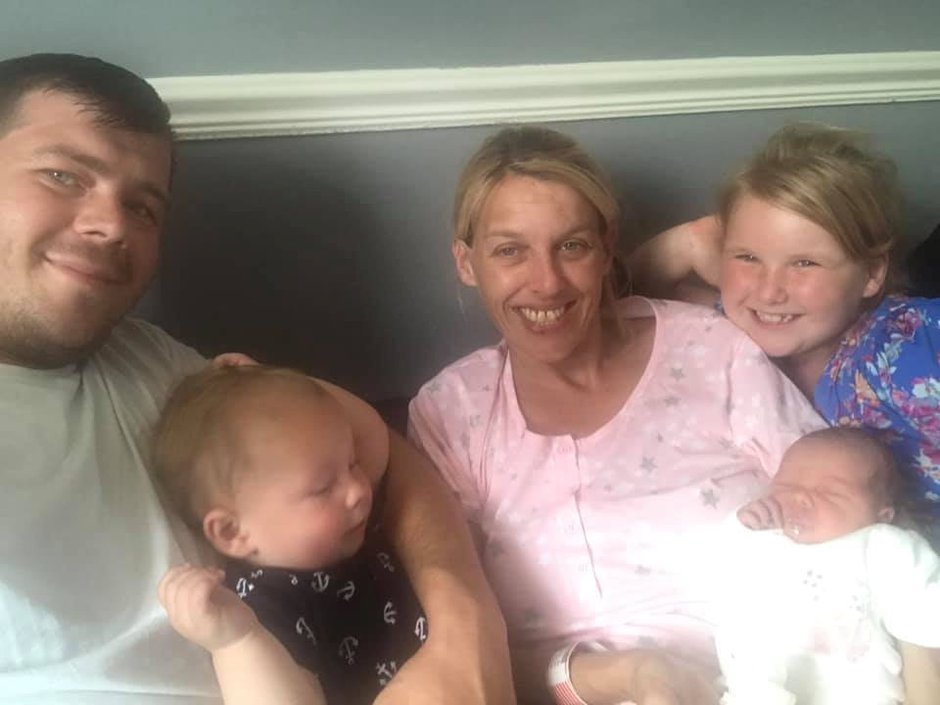 He sought the advice of his doctor and went for a scan at Tunbridge Wells Hospital that same month.

Medics revealed he was suffering from a bleed on the brain which had been caused by a tangle of poorly formed blood vessels known as arteriovenous malformation (AVM).

He was diagnosed on July 14th – just five days after the birth of baby Willow.

Gemma said: "He had so much to live for.

"He was such a good dad - and so hands on with our newborn.

"We were looking forward to being back at home, as the family that we had always imagined, with our three lovely kids."

In the two months after his diagnosis, Jono had two serious brain operations to try and stop the bleed.

But the operations weren't a success, and he passed away on September 2.

Jono had discussed the possibility of donating his organs with Gemma - who initially wasn't sure if it was a good idea.

But after visiting a chapel with Jono’s father and discussing donation, Gemma went outside for some air and bumped into a group of people promoting organ donation.

Gemma said: "The only part of Jono that I didn’t want to donate were his beautiful, bright blue eyes.

"I saw a child in hospital once who had scolded himself and needed a skin graft. This really made me think.

"I don’t think anybody should have to suffer without the organs they need and my Jono has helped with that."

She received a letter from the NHS on 14 October saying a kidney and his pancreas went to a man in his 40s who had been waiting for three years.

Another kidney went to a man in his 50s waiting for a decade, and his liver was split between a young boy and a gent in his 50s.

The "very precious and especially rare gift" of his heart went to a man in his 60s.

His family also donated his soft tissues, yet to be donated, and currently being stored for future patients. 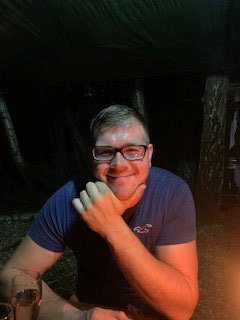 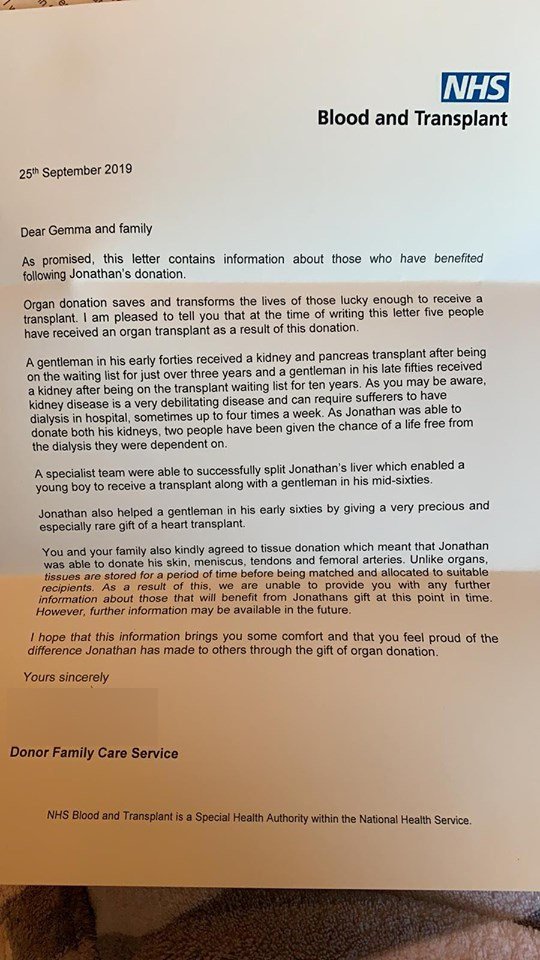 Gemma shared the letter on October 14 on Facebook - on what would have been Jono's 28th birthday, and it went viral, attracting 65,000 shares.

Gemma said: "He was truly amazing.

"Our lives are never going to be the same. I keep thinking I'm going to wake up and this has all been a nightmare.

"The children and I have gone away for a little holiday. I need to think and get things sorted out.

"But I want to give Jono the recognition he deserves.

"It's devastating that he won't be there to watch our children grow up.

"Mine and my children's lives have been turned upside down, but one thing I have learned from this is to live every day like it's your last.

"Cherish what you have got, never go to sleep on an argument.

"Cuddle your loved ones and tell them that you love them.

"You don't always need money, go out and jump in puddles with the children because things can change in the blink of an eye. I should know."