Eddie Wadsworth, 85, even decorated his scooter with tank tracks, a model gun and covered in camouflage paint 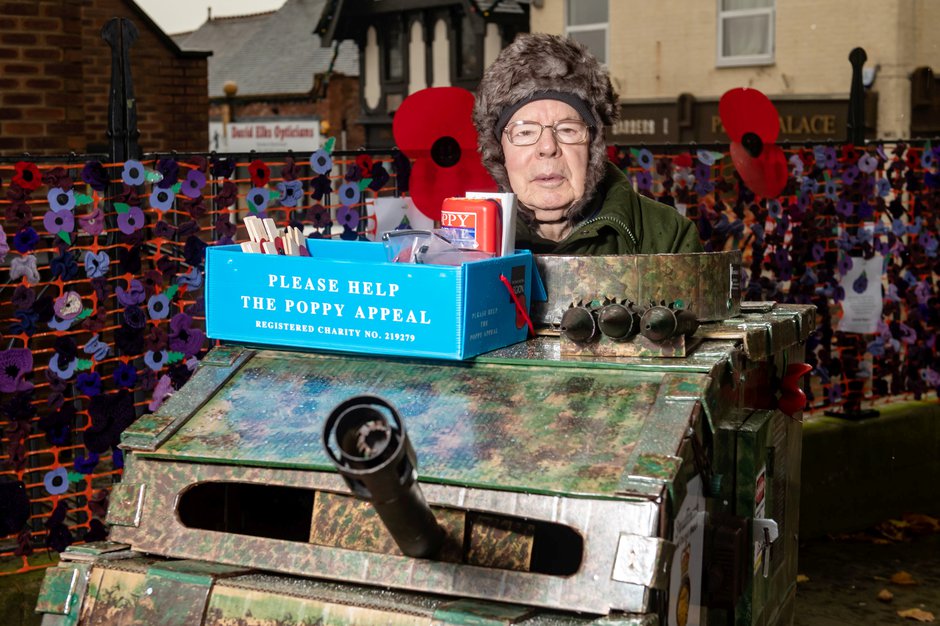 A patriotic poppy seller has transformed his mobility scooter into a TANK ahead of Remembrance Sunday - complete with tracks, a gun and mini rockets.

Eddie Wadsworth, 85, spent "many hours" creating his own version of an armoured vehicle out of disused cardboard boxes and other recycled materials.

The grandfather-of-two has even added military music to the tank as he drives around his home town raising funds for the Royal British Legion.

Eddie also painted the wooden-framed vehicle in camouflage green and brown and it comes complete with a turret and working doors, costing just £7 in total to make.

Eddie, of Swadlincote, Derbys., said: “The reaction to my tank has been incredible.

“I was a bit reluctant at first to go out in it. I was a bit unsure of the reaction I would get but people have really liked it, which has been brilliant.

“I have been surprised by the number of young people who are interested and have bought poppies and got involved.

"I didn't think the younger people were still following it. I'm pleased its been able to help people take an interest in Remembrance Sunday." 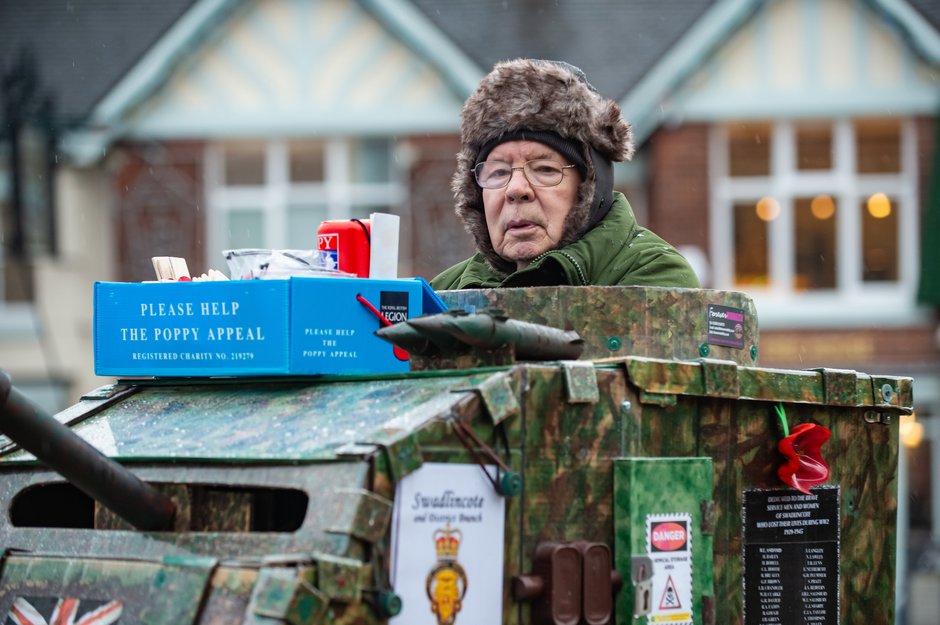 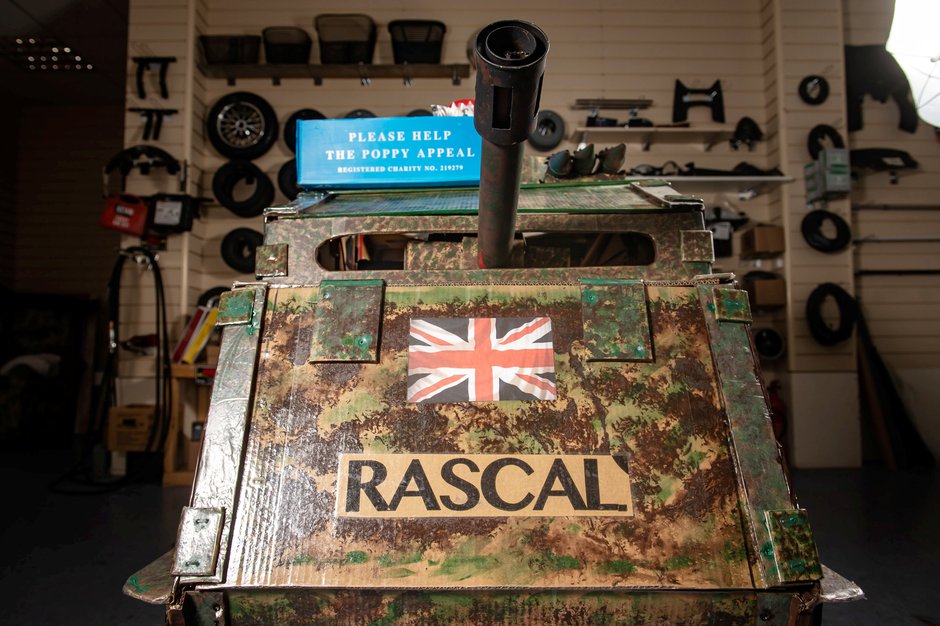 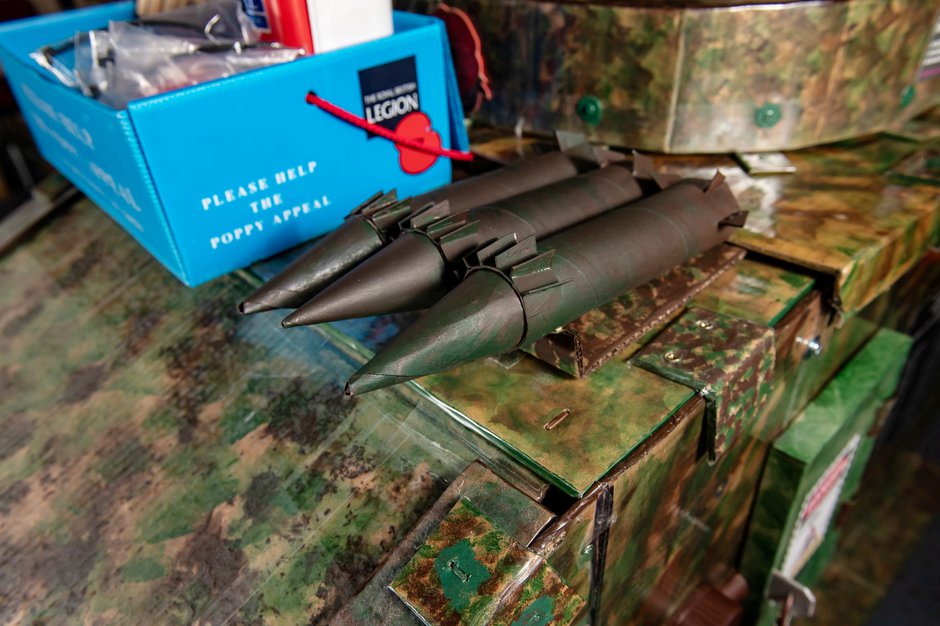 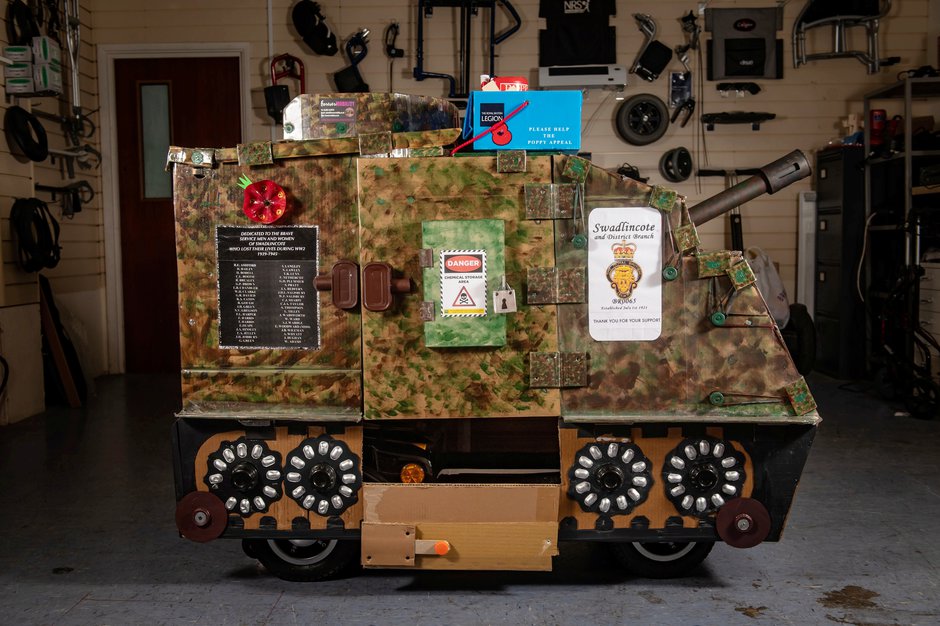 His father, John, was killed in action during World War Two in 1944. He lost his life aged 34 at the Battle of Anzio, where there were more than 40,000 Allied casualties.

He added: “I can vaguely remember my Dad. I never had a lot of contact with him because he had been in the army from 1939 to 1944. I was only a toddler when he left.

“I'm really repaying the Royal British Legion in the best ways I can. I remember my mother was in a right state with her losing her husband that young.

“The Legion used to the look after the children whose fathers had been killed and I think probably also any others that were in the services, not just the orphans.

“Every year at Christmas there used to be a big party and trips out to the seaside and stuff like that. I think there is a bit of that missing now in the services.”

Eddie has been volunteering with the charity for the last seven years and says he always tries to do something different for them each year. .

He added: “Four or five years ago I made quite a big memorial with all the names of the local Swadlincote people who had lost their lives in the World Wars.

“They have got various plaques up in the library that I have made over the years. I've got stuff all the over the place to be honest.

“I don't know what gave me the idea for the tank though. The thing is, I'm always making something and it's just one of those things that has developed.

“Now it's done I hope it commemorates my father’s death and all the others who died in wars.

“I was a carpenter until I retired, then I moved into my flat. Obviously, I can't use woodworking tools in a flat, such as saws and drills.

“My neighbours wouldn't care for it and they don't much like me playing my trumpet now anyway.” 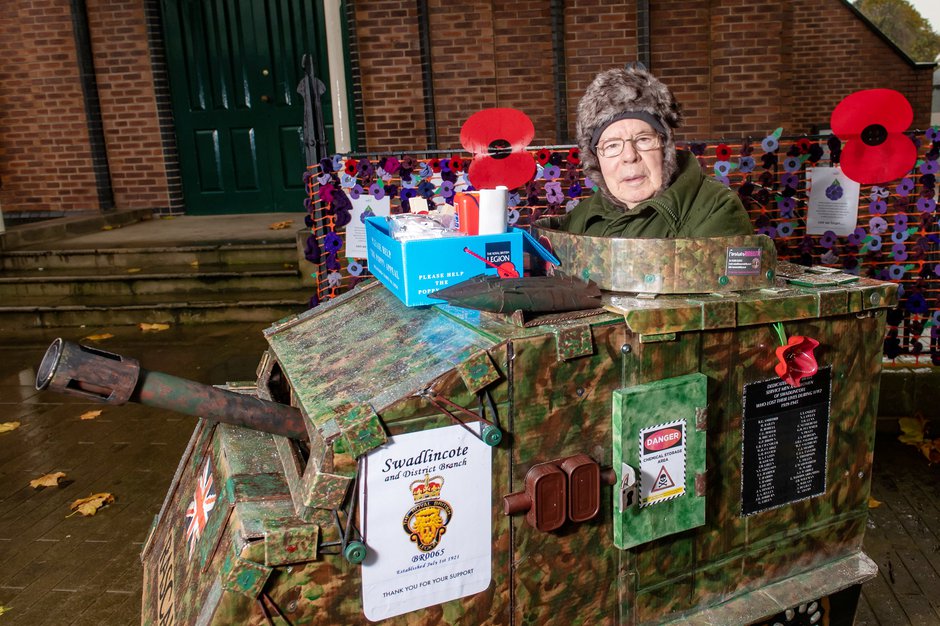 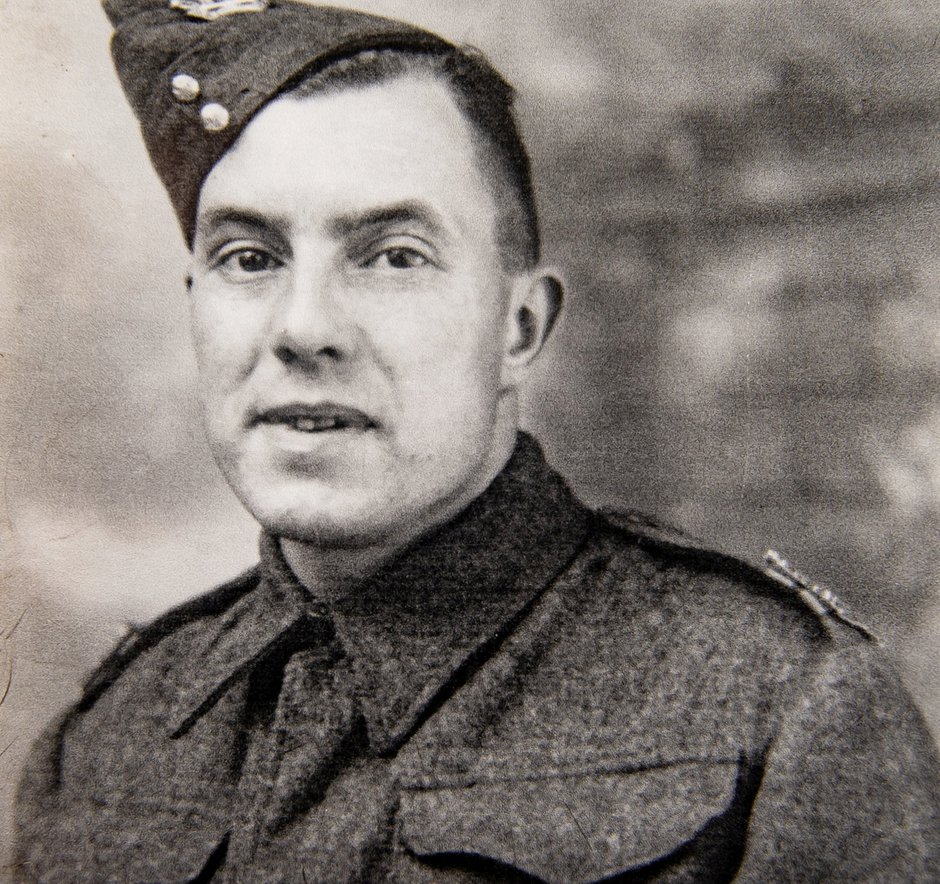 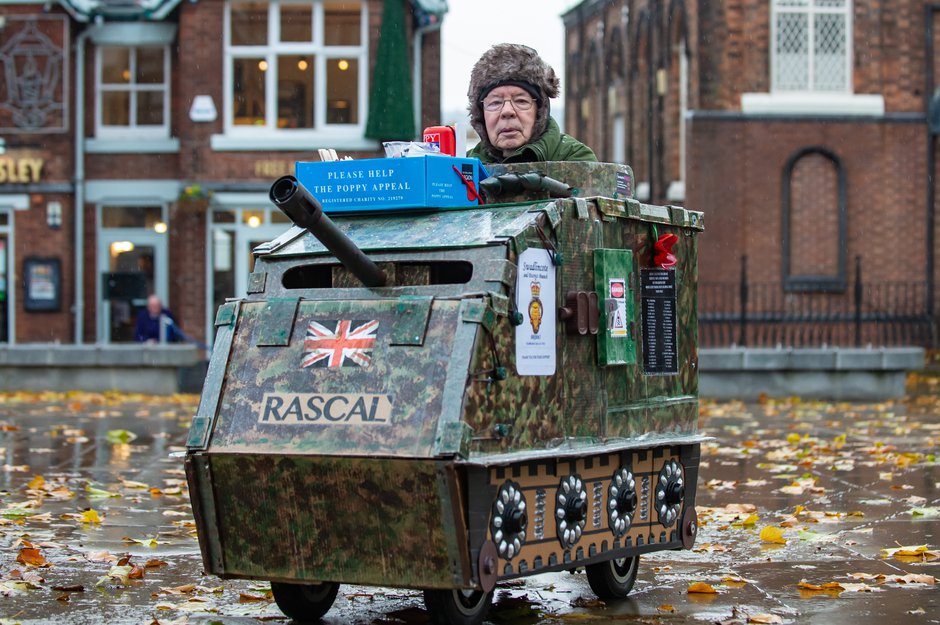 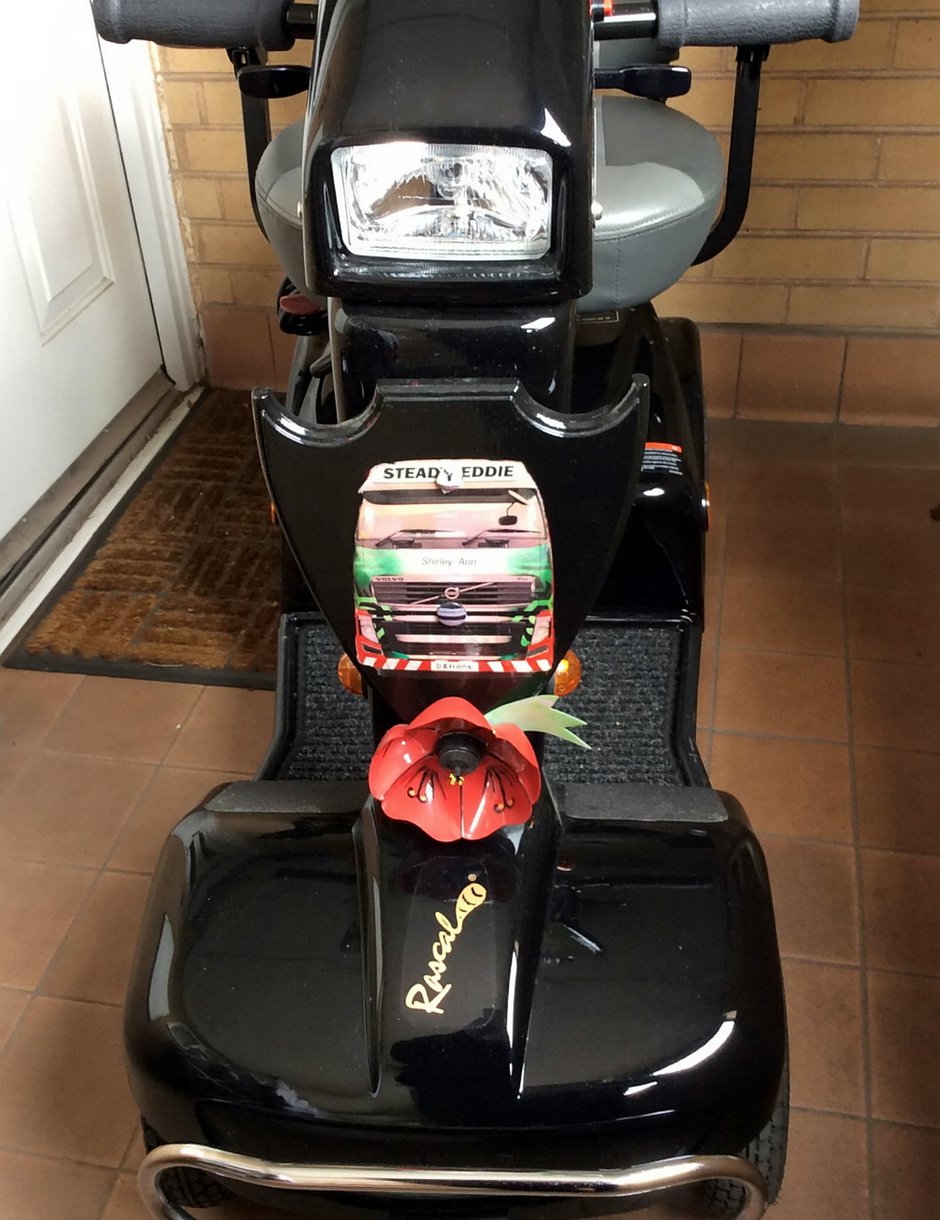 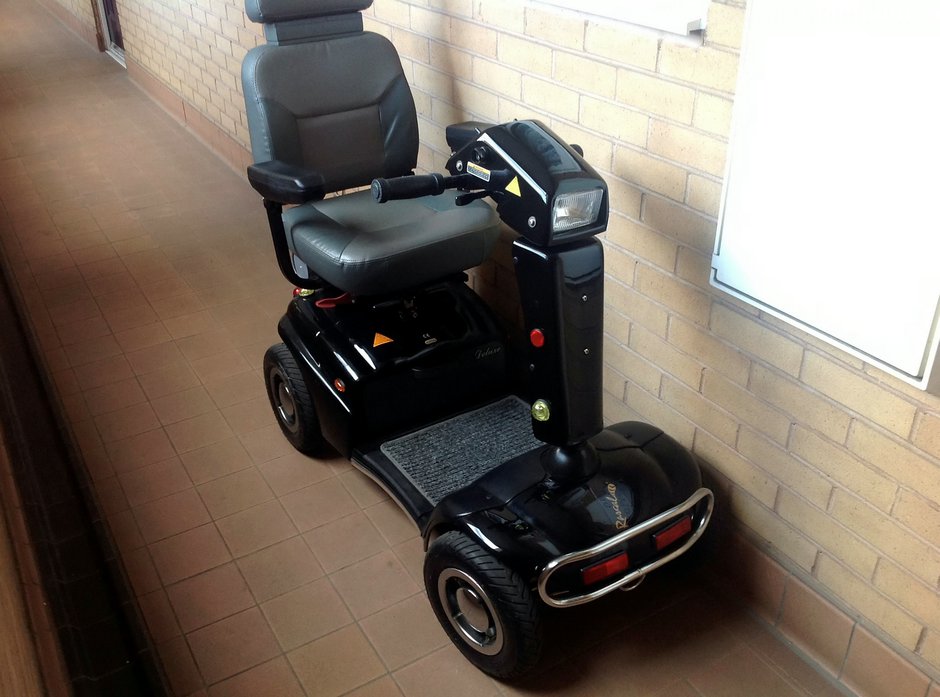 The tank is made out of recycled cardboard boxes, which Mr Wardsworth got from local shop Forever Mobility which is in Swadlincote town centre.

Eddie has also managing to waterproof the cardboard for the wet winter months ahead by covering it in plastic.

He said: “I started making things with cardboard simply because it is a good substitute material for wood.

“I covered it with the clear sticky back plastic to try and waterproof it. It was all recyclable stuff anyway.

“That plastic covering was the only cost, so it only cost me £7 altogether. To be quite honest, that's where the skill is in the whole project.

“You have to get the wrinkles out when applying it and make sure it is even all the way around. I made a good job of that because everyone I speak to thinks it is metal.

“I was thinking this morning, what could I do with it when I have finished this? What could I do next? I’ve always got to be doing something.

“It is a flat pack, basically. It all breaks down to small pieces. I call it my Ikea Tank.

“Forever Mobility have been good enough to store it for me because I can't store it here in my flat.

“I got all the cardboard from the shop because they have a lot of scooters coming from abroad and the cardboard is really good quality."

Lee Sherratt, 36, owner of Forever Mobility, said the tank is ‘absolutely marvellous’ and many hours have gone into its creation.

He added: “Eddie has spent so much time on it. We have saved him good bits of cardboard.

"He told us he has spent hours and hours on it, but he is so modest.

“The attention to detail is just brilliant, even the doors open. He’s thought of everything right down to how to actually be able to fix it onto the buggy.

"‘He takes it so seriously, even down to wearing a helmet."

Mr Wadsworth, who lost his wife Shirley in 2011, would have celebrated 60 years of marriage this year.

He will be out visiting shops and businesses ahead of Remembrance Sunday, hoping to raise as much money as he can for the Royal British Legion.

The Poppy Appeal has 40,000 volunteer collectors and sees more than 40 million paper poppies distributed each year.