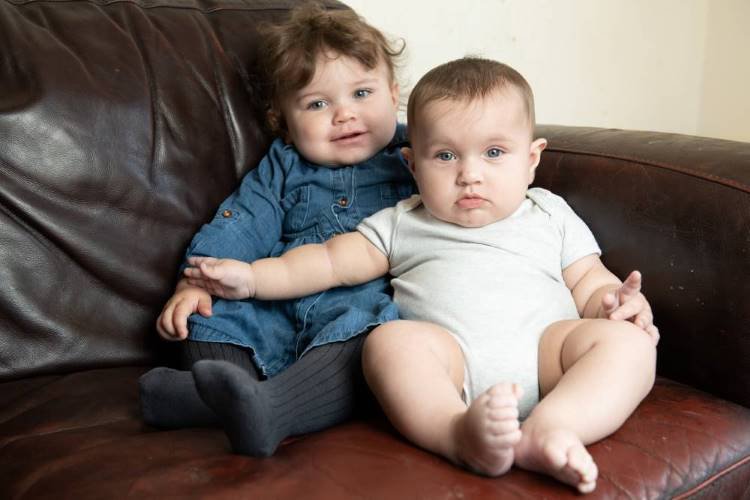 A baby born weighing 14lbs 15oz is now so big he's already eating porridge and bursting out of size 9-12 month clothing - at the age of just FIVE MONTHS.

The tot is now a hefty 1st 10lbs and squeezing into size 9 to 12 month baby clothing - despite not yet being six months old.

Mum Cherral Mitchell, 31, says her little boy is now so chunky and hungry that she's having to wean him off milk and start him on soft foods.

He loves porridge and rusk biscuits - despite most babies not being ready to eat solids until they are at least six months old.

The mum-of-four, from Thame, Oxfordshire, said: “Alpha was a whopper.

"We knew he was going to be a big boy as my bump was huge, but we didn't realise quite how big he would be until he was here.

"I'd had three babies before and with Alpha it felt like we skipped the new born stage altogether - and went straight to him being three months old.

"He didn't fit into any new born or 0-3 month baby grows - he went straight to 3-6 month and quickly grew out of them.

"And I just found he wasn't feeling full enough after drinking his milk so I've had to start weaning him early.

"Now he gobbles up porridge and he loves rusk biscuits too. 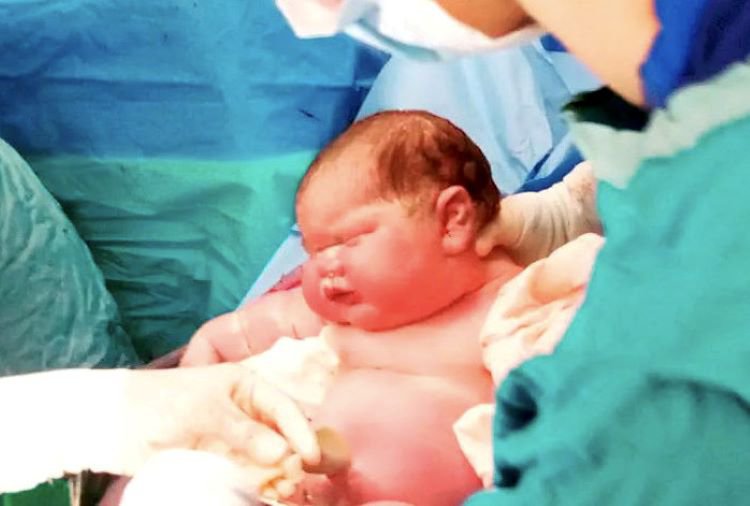 Alpha’s considerable appetite leads him to eat baby porridge first thing in the morning, before drinking 7oz bottles of Aptamil baby milk every three hours and consuming a whole baby rusk in the evening.

Full-time-mum Cherral - who has Rouge-Angel, five, Lyon, three, and Twyla-Bay, one, with husband Tyson, 36, an electrical engineer, - said: “We just started introducing baby porridge because he still seemed hungry in the morning.

“He’s not quite six months yet, but it’s not affecting his digestive system so it’s fine.

“He also sleeps all night from his last bottle at 9 or 10 o’clock until he wakes at five or six, ready for his next one. He's a good baby."

None of Cherral's other children were as big as their little brother when they were born.

Cherral revealed: “None of my children weighed anywhere near 1.5st at Alpha’s age.

“And they only needed to be fed every four hours - he's definitely the greediest.”

“Because Alpha is so long, he’s not far off his one-year-old sister’s height so people actually say to me ‘ah you’ve got twins!’

“He doesn’t even fit in his carry cot anymore because he’s so long, so he sits in a car seat on the buggy instead.” 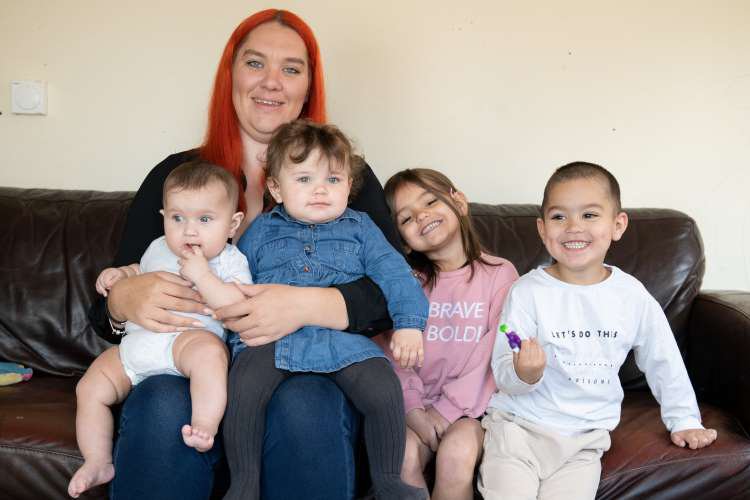 Twyla-Bay is only 10 months older than her younger brother, but Alpha already weighs just under 11lbs lighter than her.

Twyla-Bay and her two older siblings were delighted to welcome their baby brother when he returned from the hospital at the end of last year.

“They always want to hold and feed him and even put his dummy in before I even get a chance to, so they’re helping out a lot.”

During her 30-week scan, it became clear that Cherral was expecting a larger-than-usual baby, and at 36 weeks, her baby bump ballooned.

Doctors believed this was due to Cherral’s gestational diabetes diagnosis - a condition which caused Alpha to consume sugary amniotic fluids in the womb.

But despite doctors’ predictions, Cherral and husband Tyson could never have imagined their son would be born weighing over a stone.

Cherral said: “When we first saw him, my first thought was he was not going to fit into any of the clothes I’d brought in the hospital bag.”

“Tyson even had to go home to bring back some 3-6 month clothes for him.

“When he was first born, I suddenly thought ‘oh wow, you are a big baby’ and then started asking the midwives how big he was.”

Weighing 14lb 15oz, Alpha claimed the title of the UK’s third largest new born baby on record, closely following Guy Carr who measured 15lb 8oz at his birth in 1992, and George King who tipped the scales at 15lb 7oz in 2013.

Cherral recalled: “One of the anaesthetists admitted to me that Alpha’s birth was the first one she hadn’t cried at because she was just so shocked by his size.

"Everyone kept laughing when his head came out. My husband Tyson was like: 'He's a chunky boy'.

“Tyson still calls Alpha his future Strongman, and already says he’ll need to do some more weightlifting training to keep up with his son one day.”