Shannon, 23, already had two children of her own when her mum passed away suddenly at 39 and she promised to bring her siblings up as her own. 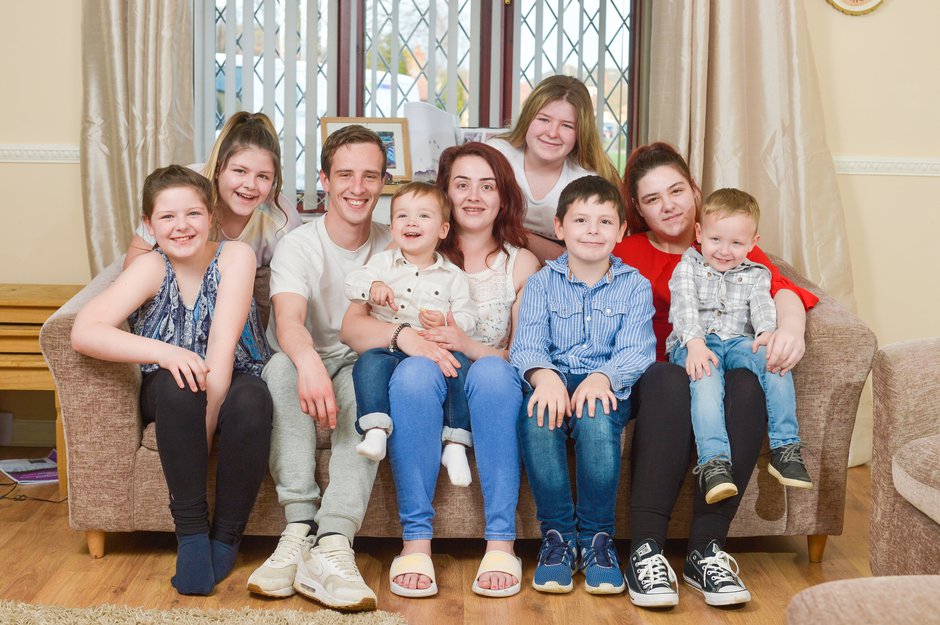 Meet the 23-year-old who has become mum to her five siblings as well as her own two kids - after her mother's sudden death.

Shannon Ellis was just 22 when she stepped up to care for the brood of seven after her mum Shelley, 39, died in January this year.

This Mother's Day she received handmade cards, boxes of chocolates and bouquets of flowers from her brother and sister.

The brood will also paid tribute to Shelley by visiting the tree where they spread her ashes near the park she used to take them to.

Shannon - who was already a mum to her own children - Harrison, three, and Rowan, two - was devastated when she lost her mum.

But rather than see her siblings placed in care, Shannon volunteered to raise them as her own, under one roof.

She took them in with her partner, Kieran Ferguson, 23, at their home in Hartlepool, County Durham.

Shannon, who is a full-time mum, said: "I always wanted to be a mum, but I never imagined I'd have to fill my own mum's shoes and go from a mum-of-two to a mum-of-seven overnight.

"But I promised mum I'd look after my brother and sisters.

"She'd have hated to see them split up or in care, I never would have let that happen.

"We have our moments, but we're still one big, happy family - just as mum wanted.

"She did everything to provide for us - despite being a single parent and raising us all on her own.

"She'd take us on family trips to the seaside and would muck in with us playing games. On a Saturday night she'd always rustle up a huge home-cooked feast.

"We had an amazing childhood and always felt very loved and protected by her.

"She made me want to have children of my own and she was over-the-moon when she became a grandmother to my two little boys."

Shannon was born seven years before her next sibling, so for the first years of her life, she and mum Shelley were inseparable.

“I was her mini-me,” Shannon said. “We would do everything together.

“She was both mum and dad to me as my father wasn't on the scene - but she was also my best friend in the world.

“I remember watching in admiration as she put her make-up on in the mornings and thinking, I want to be just like her when I grow up." 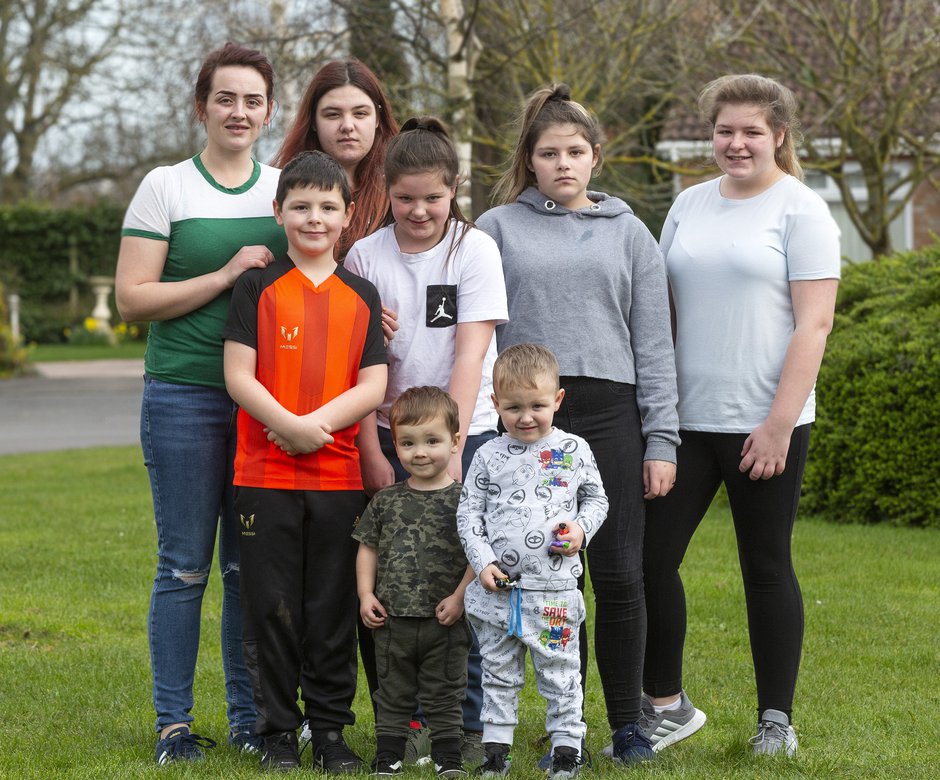 For many children, the sudden arrival of new siblings after years of undivided attention would cause upset - but not for Shannon.

Sliding with ease into her role as their big sister, she doted on her younger siblings from the very first time she set eyes on them.

“I remember the first time I met Mia and mum said I could give her a kiss,” Shannon said.

“She was sleeping so peacefully and I carefully kissed her tiny face – I was so scared of breaking her, she was perfect.”

As the number of her siblings grew, the Ellis’ became one big happy family.

“We were all really close,” Shannon said.

“We’d have the odd fight as brothers and sisters do, but all-in-all we looked out for each other and mum made sure we were always happy.

“I would help her out where I could - getting my younger brother and sisters ready for school and out the door – mum couldn’t do it all by herself!”

By this time, Shelley was no longer with her partner and the father of the younger children, but the family got on perfectly fine with the help of Shannon.

They enjoyed trips to Headlands Beach or Summer Hill, near their home in Hartlepool, and caring Shelley would make sure the car was packed with everything they would need.

She helped with homework and tucked each one of her six children into bed each night, with more than enough love to spread between them all despite having barely any time for herself.

Keen to start a family of her own, Shannon fell pregnant aged 18 after she and Keiran had been dating for eight months and had two sons - who Shelley doted on.

"I remember taking the pregnancy test at home first thing in the morning before work,” Shannon said.

“I ran screaming and shouting into mum’s room, jumping on her bed and telling her she was going to be a grandma.

“Mum knew before Kieran did – that’s how close we were!

“She was over the moon and although I was nervous about being a young mum, I knew I could do it if I just followed the amazing example my mum had set.”

Harrison, three, was born in May 2015, followed by another grandson for Shelley, Rowan, two, in January 2017.

Shannon and Kieran moved just around the corner after the birth of their two boys to give the family some more space – but that didn’t mean they weren’t together all the time.

Shannon said: "Mum was an amazing grandmother - she absolutely adored the boys.

“Not a day went by where I wouldn’t see my mum.

“She helped look after the boys if we were busy and taught me the tricks of the trade.

“She was besotted with her grandchildren, the same look I’d seen when my siblings were born all those years earlier, and I was so happy to have her help throughout their early years.

"I always thought she'd be there for me to give me guidance and to watch her children and grandchildren grow up."

But the family's lives were turned upside down after Shelley was taken unexpectedly ill in January 2018 - and told she had just days to live.

Shelley was rushed to the University Hospital of North Tees, Hartlepool, where medics discovered she had a rare disease.

Shannon was told by medical staff that her mum Shelley would never be the same, and had a maximum of two years to live.

“I couldn’t contemplate losing her but the doctors assured that would be the case.”

When Shelley heard she didn’t have long left, she became unbelievably worried about what would happen to her children left behind.

“It was horrible seeing the worry in her face, she loved us all so much,” Shannon said.

“But I promised her that the kids would never be alone and that I would step up to look after them.”

Shelley’s condition deteriorated rapidly, and just two days later they were told the end was imminent.

Shelley was moved to Alice House Hospice, Hartlepool, to make her final days more comfortable, and the family gathered around to make their heart-breaking goodbyes.

“I can’t thank the staff there enough, they were brilliant to poor mum,” Shannon said.

“They were so lovely and understanding and made sure she had everything she could have needed until the time came.” 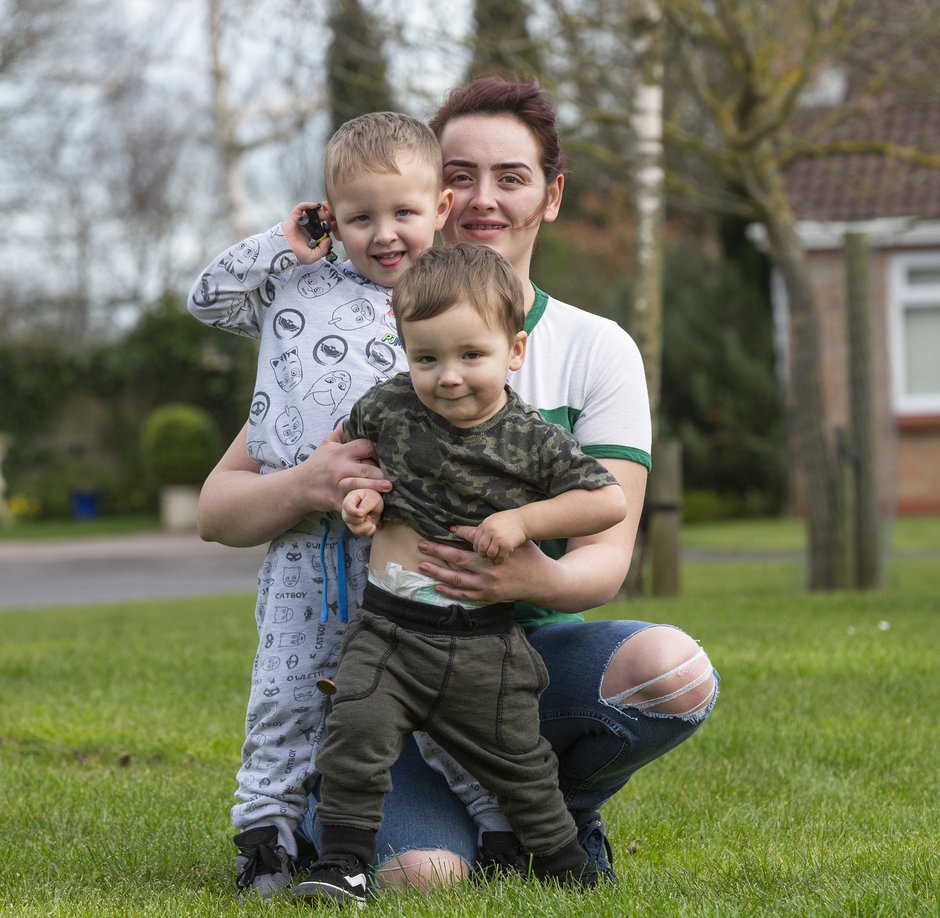 Shannon was there when she passed, and curled up on the bed next to her beloved mum until she knew the time had come to tell the rest of the family.

“There’s nothing to describe her death other than a feeling of emptiness,” Shannon said.

“My best friend, my biggest support and my incredible mum had been taken from our lives and I felt so empty.

“But I had to be there for the kids, and we sat together sobbing for what seemed like hours.”

Having gone from speaking to her mum every single day, Shannon was left lost without her.

But she found strength in her siblings and the unity of their family.

Shannon - who was the eldest of her siblings - knew she had to keep her final promise to her beloved mum and stepped up to become the legal guardian for her five siblings.

She said: "Losing mum was horrendous - it came so out of the blue. It hit us all so hard.

"One minute she was there and seemed fit and healthy and the next we were told she had days left to live.

"When she passed away, it didn't hit me straight away. I just felt numb.

"But the one thing that kept me going was my brother and sisters and my own boys. I knew I had to get up each day to be there for them and to look after them.

“I couldn’t have done it all without Kieran – he had no experience of looking after girls, let alone teenagers. But he took my siblings under his wing and was a pillar of strength for all of us.

“Mum was always a brilliant judge of character and she adored him, so I’m glad she will have known that he will always look after us.

“I can’t believe how strong my brother and sisters have been.

“To be so young and suffer such a devastating loss is heartbreaking, but to still act as maturely as they have is amazing.

“They are coping really well and I’m really proud.

“We talk about mum all the time and constantly get photos out and laugh about the joy she brought to our family.”

The family all moved in together after the death of their mum, and Shannon and Kieran have taken them on as their own – just as Shelley had wanted.

From being a mum-of-two to a mum-of-seven overnight, Shannon says she has learnt a lot over the past year and says it gets easier every day.

“It has been hard but it’s given me more of a reason to get up and get on with every day normal life. Their strength has given me the strength to carry on,” Shannon said.

“I think she’d be smiling down at us, proud of how we’re doing.

“She will always be the head of this family, and I am trying every day to follow the incredible example of motherhood she set.”