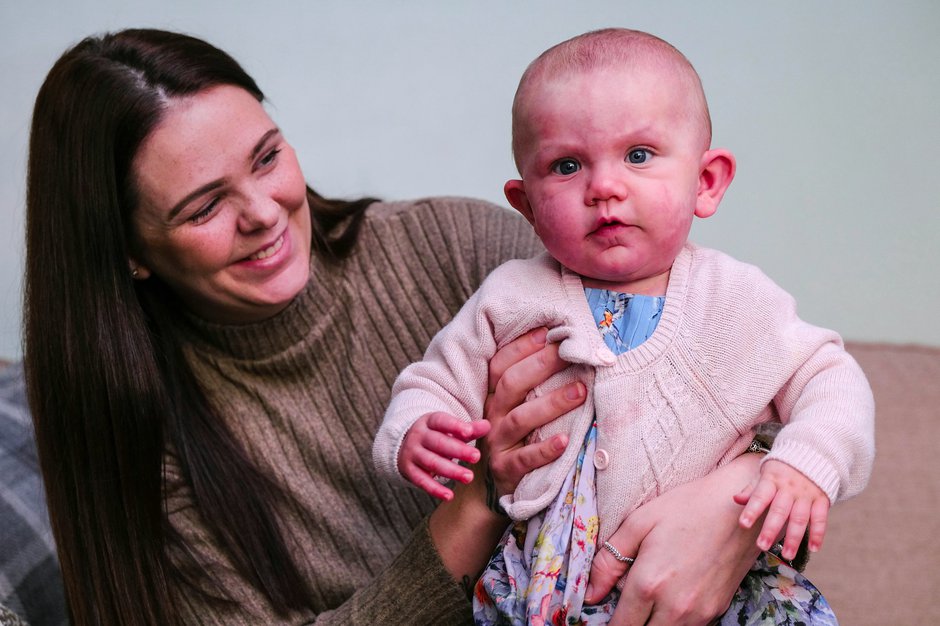 The mum of a girl with "purple" birthmarks bravely admitted she hid her from strangers for SIX weeks after she was born - and even used filters in photos she posted online.

Sara Farrow, 27, was scared of people seeing her newborn daughter Lacey-Dee Barrett in public because of the port-wine stain birthmark covering 90% of her body.

It was caused by the abnormal development of her blood vessels during pregnancy and protective Sara was scared people would single out her daughter.

So for the first six weeks of her life, single mum Sara covered her daughter’s bright-coloured skin and hid her away from strangers.

And when she posted photos of Lacey-Dee on Instagram, Sara said she used filters to mask the true colour of her daughter's skin.

She only changed her ways when she became worried Lacey-Dee would look back on her baby photos when she is older and asked her mum if she was embarrassed.

But even when she finally plucked up the courage, Sara claims strangers told her daughter looks “diseased” and “contagious”.

Sara, from Lincoln, said: “Until she was six weeks old I covered her up whenever we went out in public.

“As her mum obviously I am not bothered about her appearance but I was scared about what other people would think.

“When she was first born she was very red and looked bruised. I’ve had people say lots of things when we are out.

"I was scared of what people would think of me as a mum. People have said she looks diseased and have asked what’s wrong with her face.

“One person asked ‘is she allergic to the washing powder I use’ and people think there is something really wrong with her.

“She is completely unique and it’s just how she is.

“It makes her who she is and for me now it would be strange to see her without the birthmarks.

“I think she is beautiful and love how she looks”

Lacey-Dee was born at Lincoln County Hospital in April and Sara said she realised something was different straight away.

She had darker patches on her chest and doctors thought she may have been bruised.

Within hours, the birthmark appeared in full on the surface of Lacey-Dee’s skin and Sara said initially it was “hard to come to terms with”. 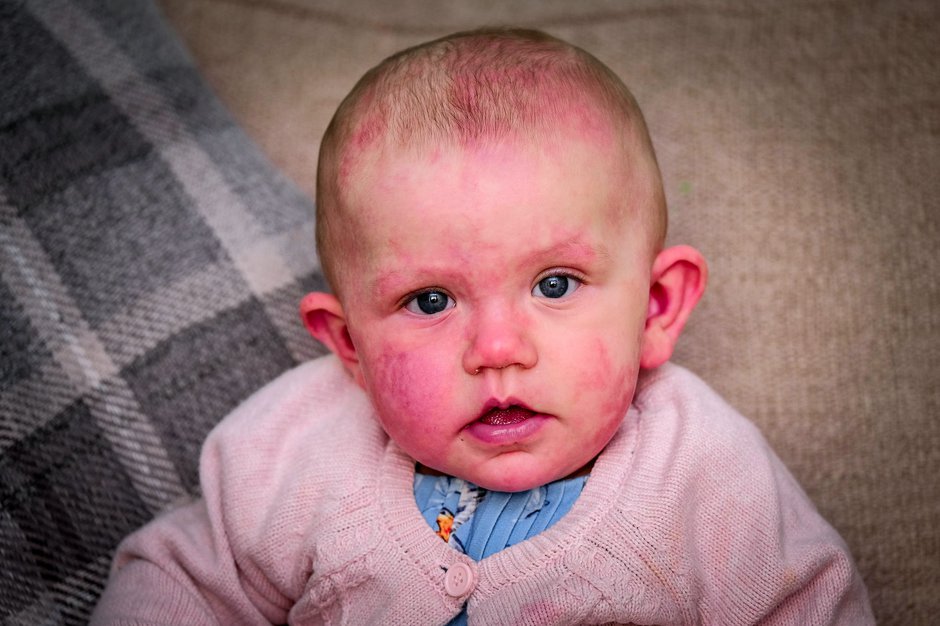 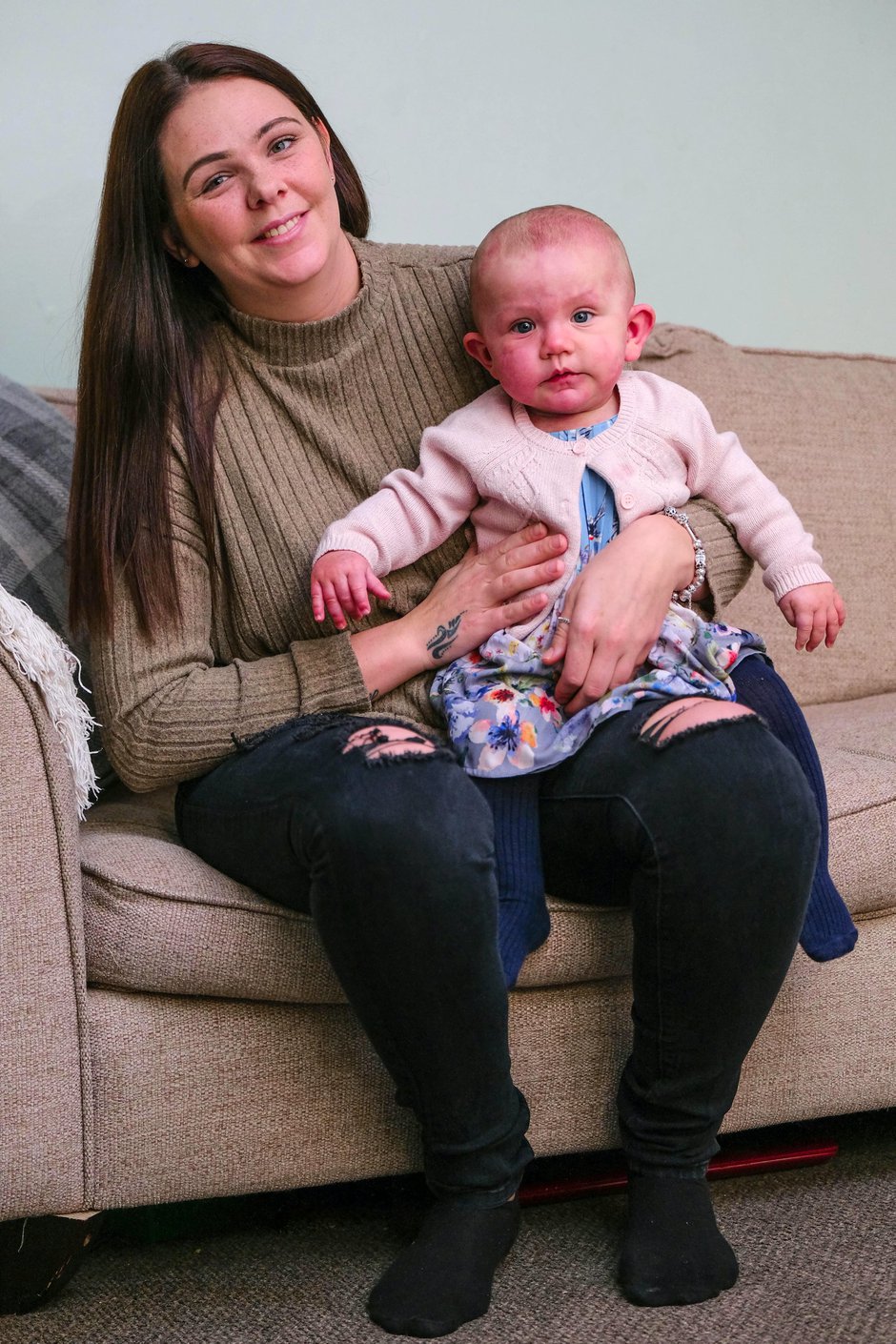 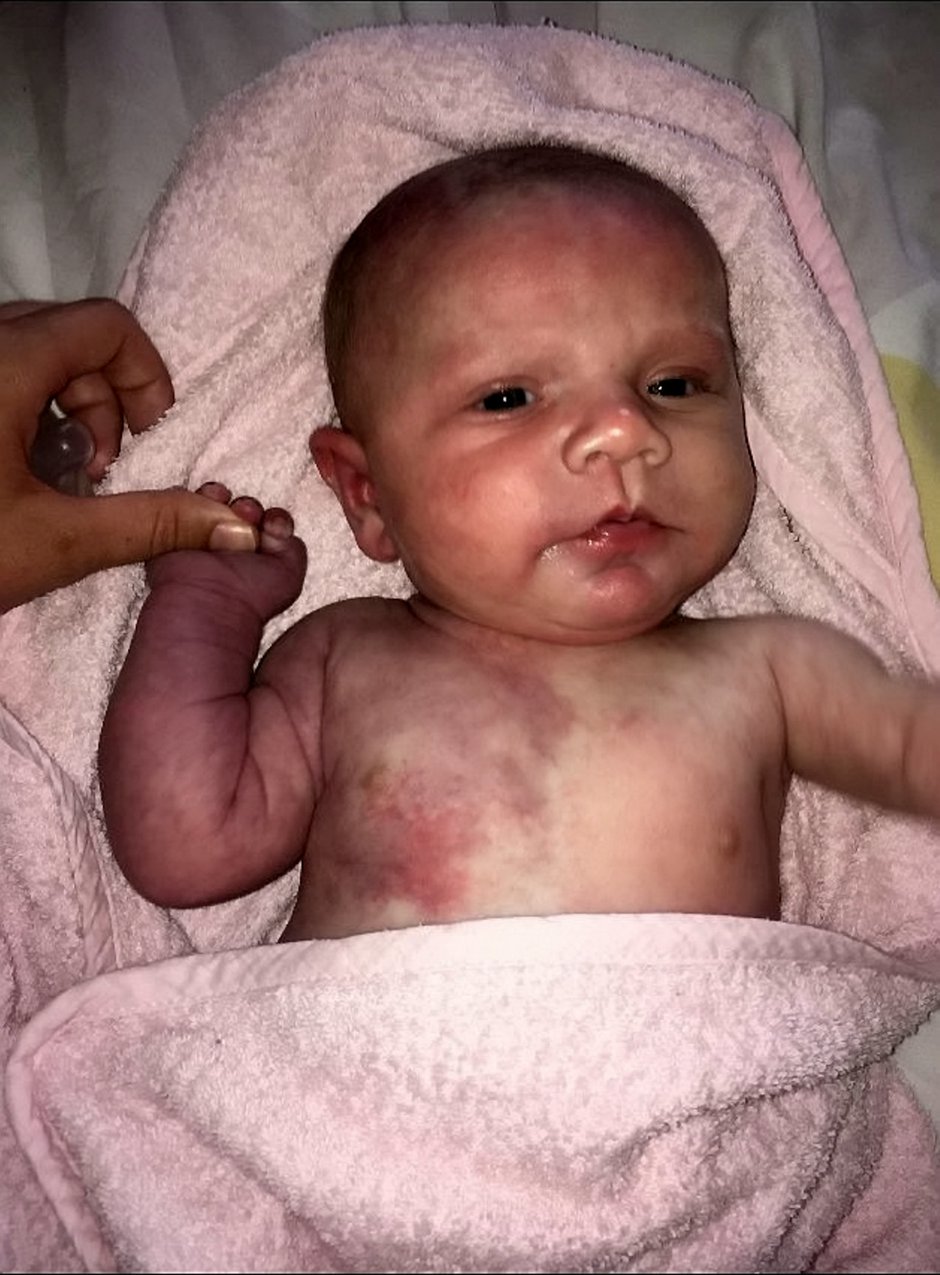 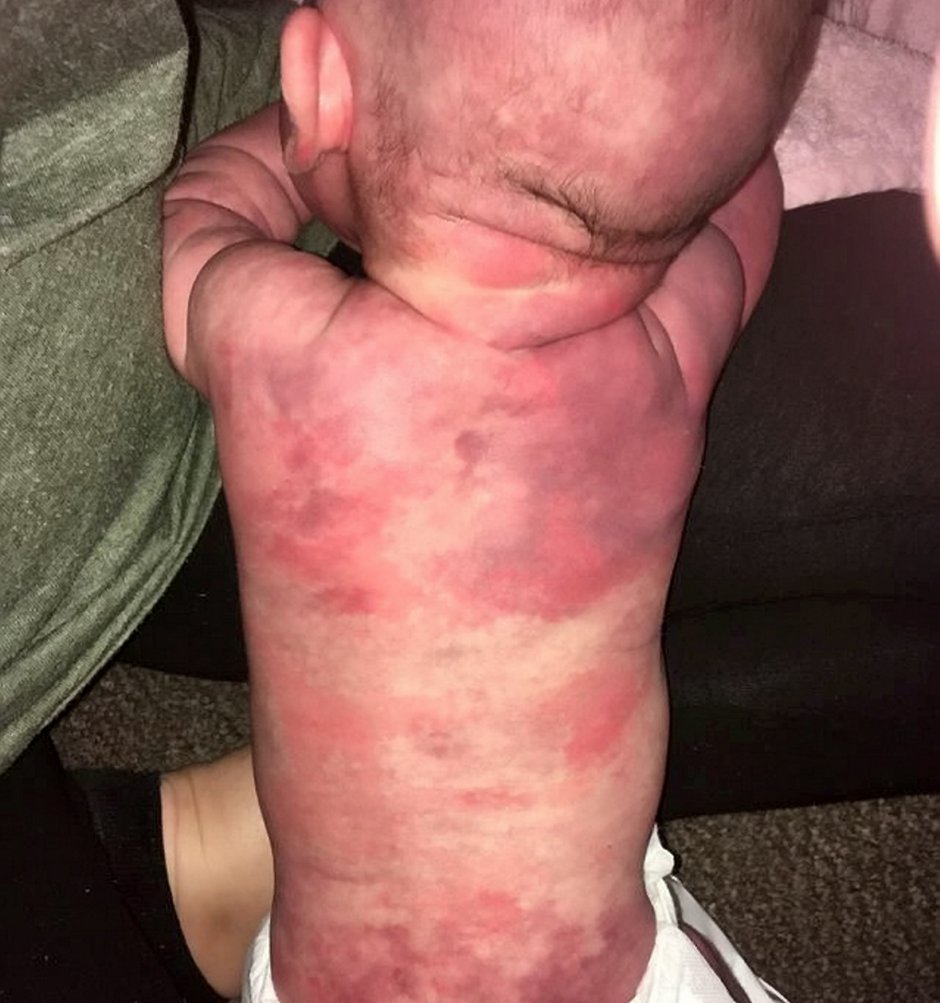 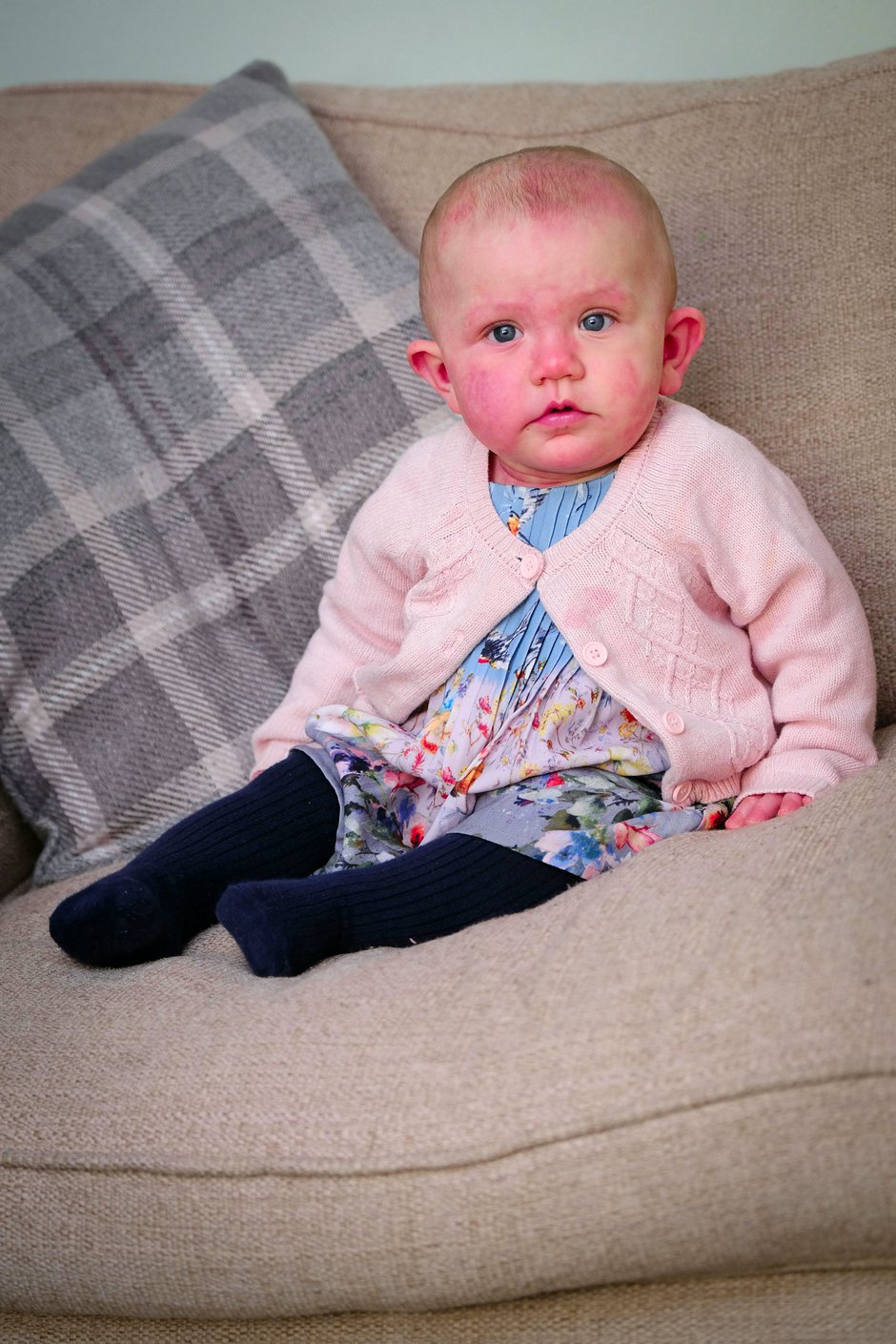 Former retail worker Sara said: “It was only on her chest at first and we thought it might be bruising.

“But after a couple of hours her whole body turned purple and blue.

“It was a real shock to be honest and I was really worried because doctors weren’t sure what was wrong."

She was referred to specialists and diagnosed with port wine stains in October.

Only three in every 1,000 babies are born with the condition which occurs during pregnancy, and usually only appear on one limb or area of the body.

Sara said she covered up as much of her daughter’s skin with baby blankets, long sleeved clothing or hiding her away in her buggy.

“I just thought ‘oh god’ and it was hard for me to come to terms with," she said.

“I was most worried about her face and I’m scared for her future.

"But it got to the point where I didn't want her to look back on baby photos and see I wasn't confident enough or I was embarrassed.

"I had to get brave for her sake as much as mine. I had to come to terms with it.

“I’m worried for when she goes to school. I don’t want her to be called names or to be bullied."

It comes with no other side effects and Sara said Lacey-Dee is a “very happy” baby.

But she said when she is out and about she faces having to explain her daughter's discoloration.

Sara said: “We went to the GP and a receptionist there said she should be kept in another room away from children playing in the waiting room in case she’s contagious.

“It makes me feel bad but regardless of the birthmark, it doesn’t change who she is.

“We have seen so many dermatologists and they all said this is the most extensive case of Port Wine Stains they have seen.”

Lacey-Dee will meet with specialists next month to see if she is eligible for colour-corrective treatment.