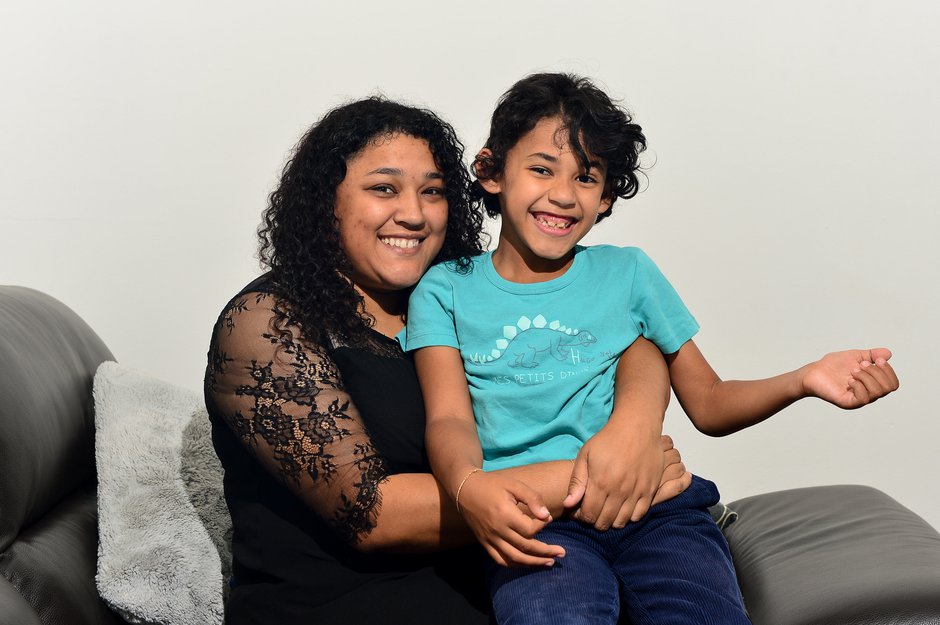 A mum faced the choice of leaving her son to battle life-threatening seizures or risk paralysing him - by removing part of his brain.

For the past seven years, Stephanie Bailey, 32, has done everything she can to help her son Gabriel, seven, in his battle with epilepsy.

But his condition just got worse, until he was having up to 70 seizures a day and couldn't go anywhere or do anything alone.

Doctors eventually said the only possible cure from life-threatening seizures was a risky operation to remove part of his brain.

But they said the op might not work, and doctors warned his mum Stephanie that even if it did, he could be paralysed permanently on his left side.

She agonised over the decision for a week - and woke up from the nine-hour operation unable to move the entire left side of his body.

Thankfully Gabriel's paralysis was not permanent and Stephanie's little fighter is already back on his feet just four months after surgery.

Gabriel has left side weakness that is slowly improving and he is even practising for a dance competition in Germany - something unimaginable before.

Teaching assistant Stephanie from Oxford said: "Choosing to send my son for brain surgery that could leave him paralysed forever was the most difficult decision of my life.

"If we didn't have the surgery, the doctors said he wouldn't be able to do much as he gets older - he'd be in a vegetative state by the time he was a teenager.

"Gabriel is the most amazing little boy and I couldn't bear the thought of his condition destroying him like that over time so I chose the surgery.

"The doctors couldn't predict if the paralysis would be permanent or not, so we took the risk that he could be paralysed forever from the surgery.

"By some miracle, my brave little boy is back on his feet already, running and dancing, just four months after surgery.

"He's only had ten seizures since the surgery, and I'm just so happy that the hardest decision I've ever made was the right one."

Stephanie, who is a teaching assistant for a special needs school in Oxford, welcomed her only son Gabriel in April 2012 with her then partner handyman Jose Pestana, 51.

Gabriel was a healthy and happy baby until he started having seizures when he was 7 months old.

With Gabriel suffering with up to 70 seizures per day, doctors suspected a brain tumour, so rushed him for an emergency MRI and he was diagnosed him with a cortical dysplasia.

Cortical dysplasia occurs when the top layer of the brain doesn't form properly and it is one of the most common causes of epilepsy.

Gabriel started taking daily anticolvulsant medication in January 2013 and he was seizure free until his first birthday - when he had a seizure while blowing out his birthday candle.

From then on, he was only ever seizure free for a maximum of two weeks.

Unsuccessful medicine changes meant Gabriel's epilepsy had become intractable and he was subject to anywhere from 10 to 40 seizures per day.

Stephanie said: "I felt so sad for Gabriel - he had to have 100% supervision and needed assistance to go to the toilet.

"I had to go everywhere with him, even around the house, because his seizures were so frequent and spontaneous.

"He couldn't play in the park without me holding his hand, and he had to bed fed because he'd have seizures mid meal with food in his mouth.

"He had seizures during the night which meant we never got much sleep and he was usually too tired to go to school so he'd stay at home with my twin sister whilst I went to work.

"It was so hard, especially because he just wanted to play like any other little boy and have some independence.

"Gabriel discovered a passion for dance, and joined KC's School of Dance in Oxford with when he was 4, with his teachers being very understanding of his condition, just taking him to the back of the class when a seizure struck and then letting him join back in.

"We learned to cope with Gabriel's seizures because we didn't have another option.

"Gabriel's father Jose and I split up a few years ago but Jose is amazing with Gabriel, he's very much still involved and is always in the family home so that Gabriel has two consistent parents.

"Gabriel is my first child so I knew no different but as he grew older, I learned to live on auto-pilot - going to work, caring for Gabriel and making life as fun as possible for him."

Gabriel's medication dosage was slowly increased over the years until December 2018 when he underwent a stereo EEG at Bristol Children's Hospital.

Stereoelectroencephalography (commonly known as stereo EEG) is a minimally invasive procedure where electrodes detect the origins of seizures in the brain.

Some 14 wired rods were bolted into the six year old boy's skull with multiple wires entering his brain in order to perform brain mapping.

Doctors stimulated Gabriel's brain by sending electrical impulses to parts of the brain where seizures were surfacing.

Findings from the EEG showed the seizures were coming from Gabriel's cortical dysplasia, and that removing the undeveloped part of the brain would give the young boy a 50% chance at seizure freedom.

However, the activation of certain rods saw Gabriel unable to use his left hand or foot, meaning he could be left paralysed on his left side by the removal of that part of the brain.

Stephanie was left with a choice no mother should have to make - leave her son's brain to slowly die with constant epileptic seizures, or paralyse her boy through brain surgery. 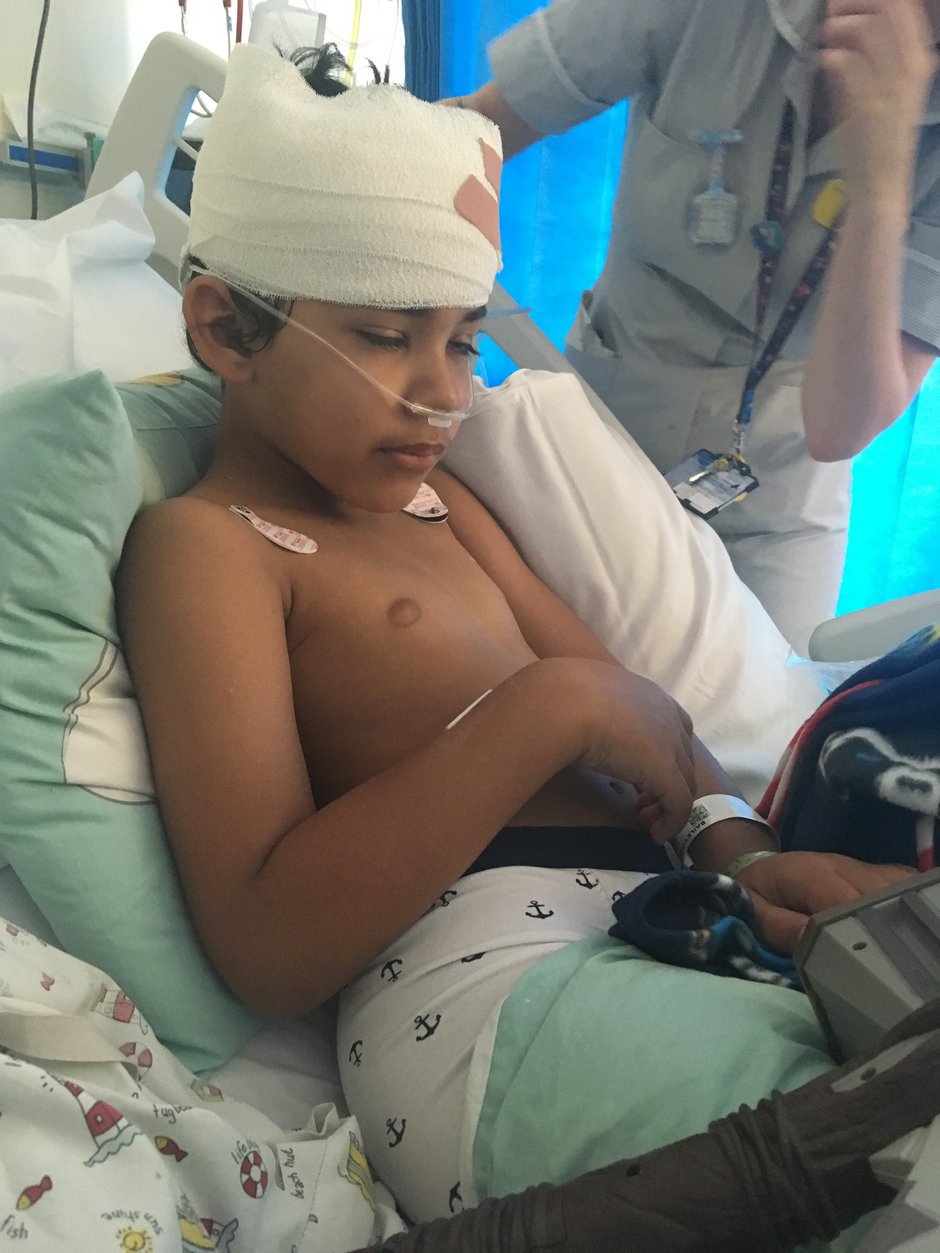 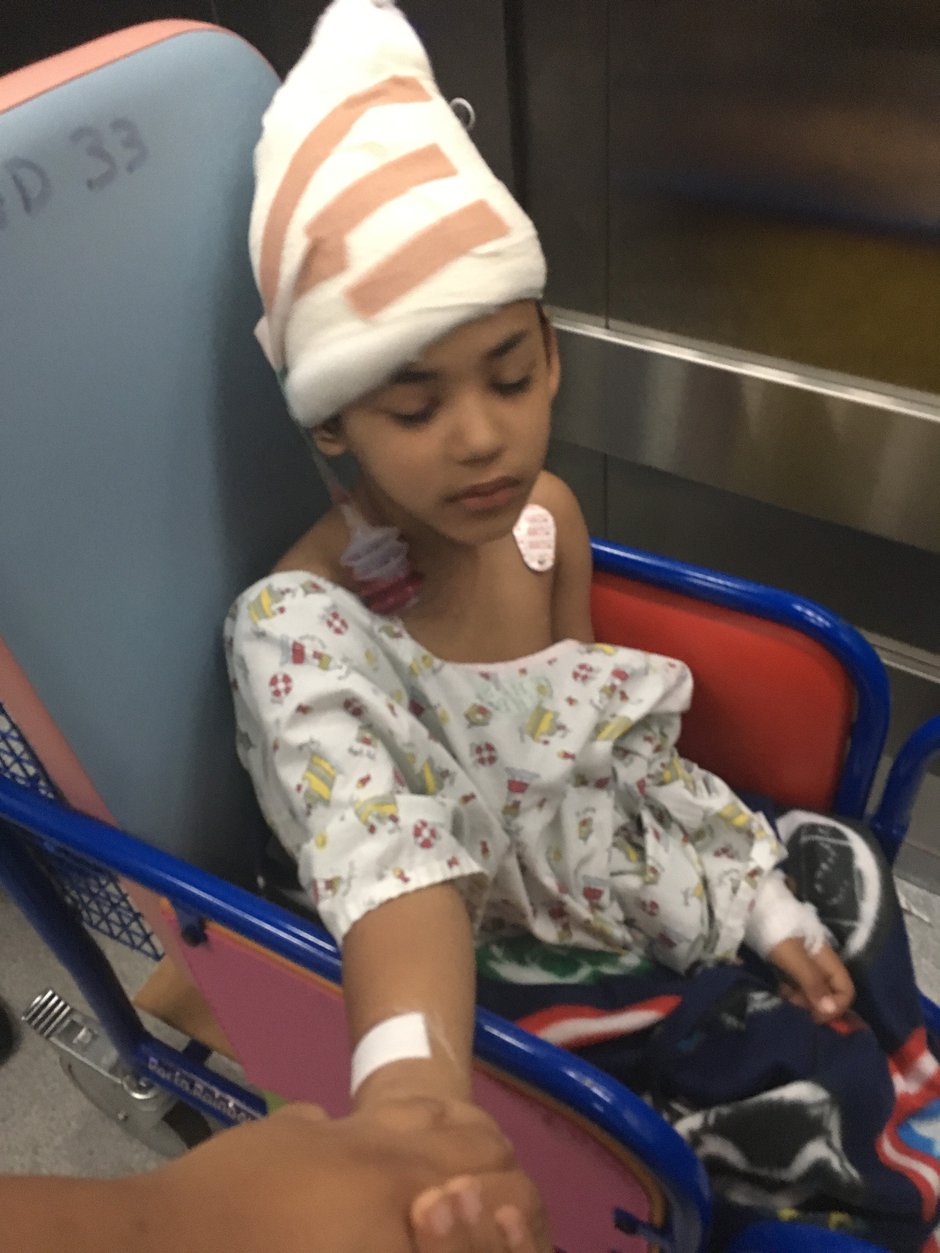 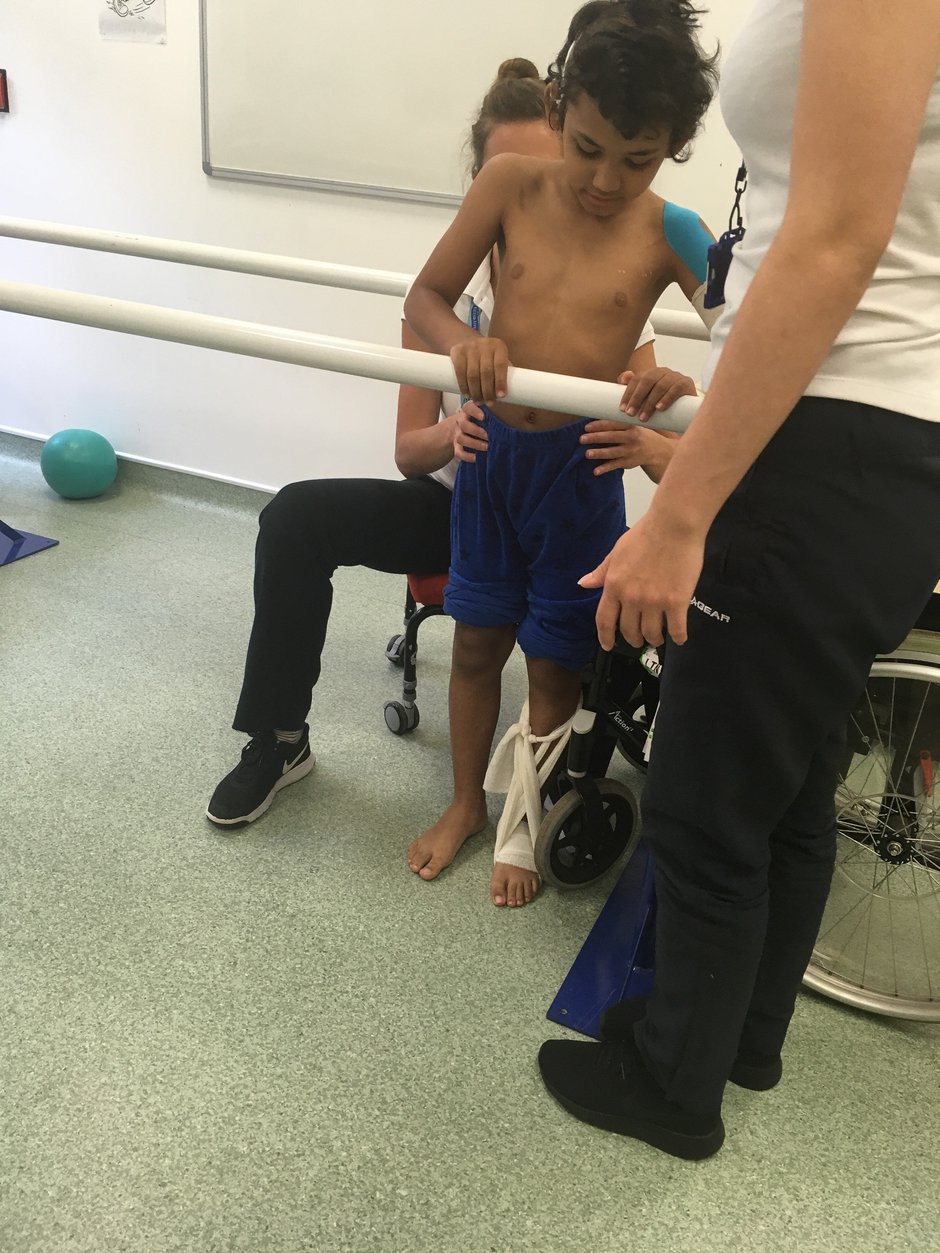 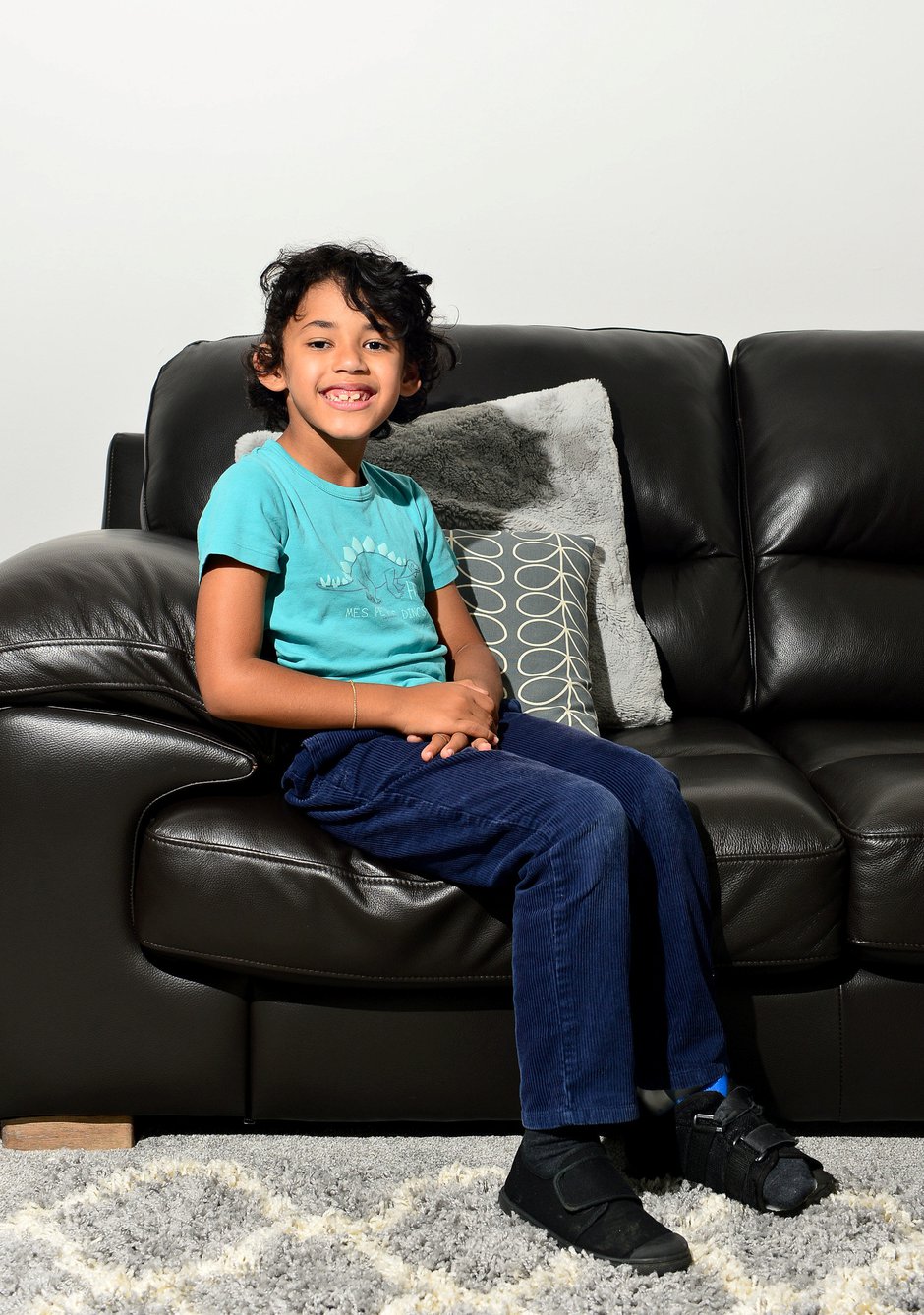 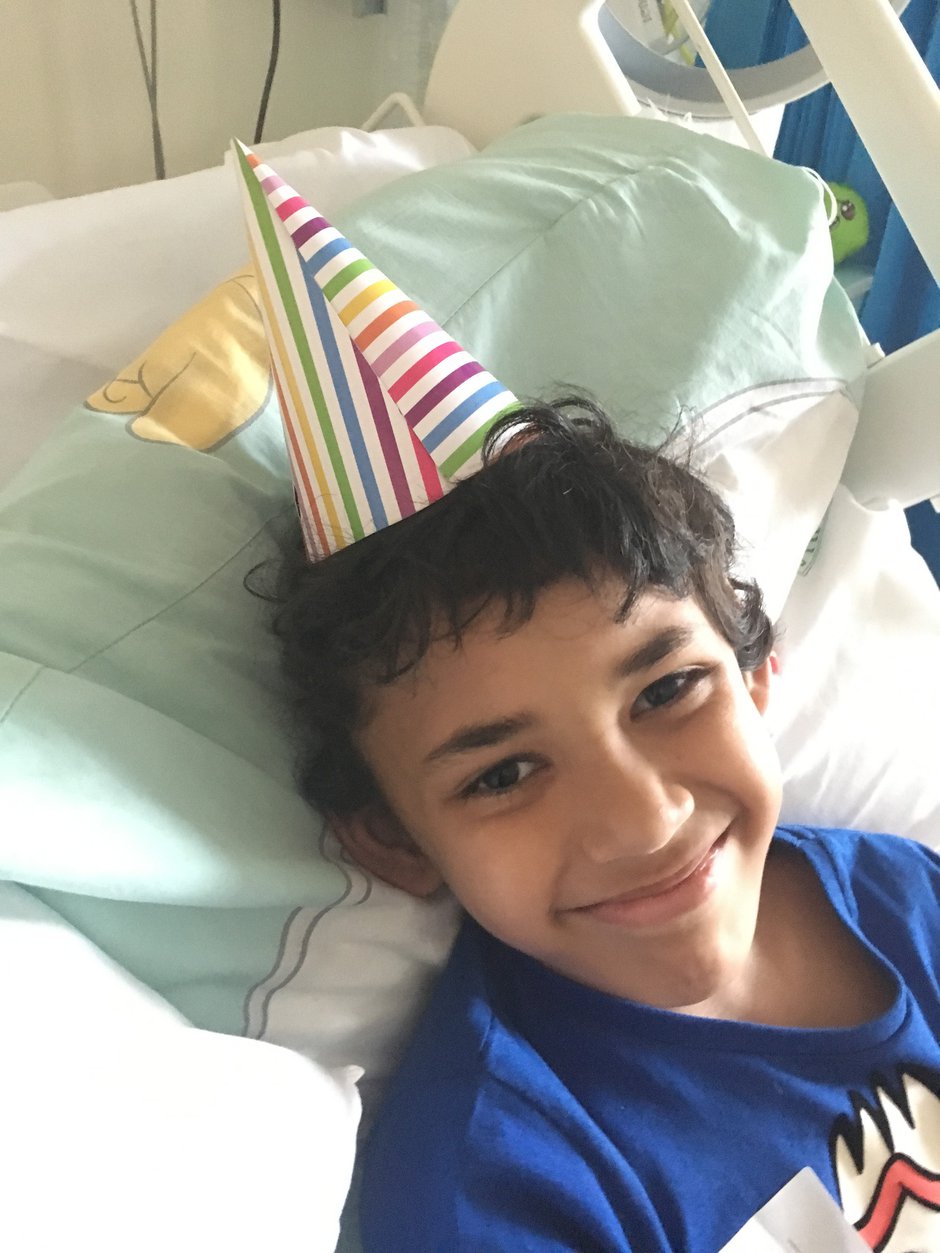 She said: "We were told that if Gabe were to have surgery, he would suffer left side paralysis that could be permanent, but he would have 50% chance of seizure freedom.

"If we didn't take the surgery option then Gabriel was likely to deteriorate, making life very limited as he grew up.

"Without surgery, there'd be a high chance of the seizures spreading to other parts of his brain and his future would be uncertain.

"It took me about a week to make the decision to go for surgery as I thought we'd rather take left sided paralysis over life threatening seizures.

"I went for the 'glass half full' approach when looking at the 50% chance of seizure freedom but I felt sick at the time and so lost, because whatever the outcome, this was on my hands.

"Gabriel loved to dance and wore his seizure helmet during lessons at his dance school, and surgery could put a stop to that forever.

"I thought how can I choose what's best for my little boy when I don't even know what that is?"

He was on the operating table for nine hours as doctors removed part of his brain with Stephanie waiting anxiously outside theatre.

The surgery was a success with doctors able to remove the undeveloped area of Gabriel's brain and greatly reducing his risk of seizures.

But when Gabriel woke up from surgery, he found he was unable to move the entire left side of his body and doctors could not determine if the paralysis would be permanent.

Unfortunately, surgery had left Gabriel with an air pocket trapped inside his brain and the little boy had to be given oxygen for 48 hours after surgery.

Stephanie said: "When Gabriel was paralysed on his left side, I was in two minds over it.

"I was so sad for him, that he couldn't move, and I was scared that I'd made the wrong decision, but those feelings were soon suppressed by the worry over an air pocket in Gabe's brain from surgery leaving him oxygen dependant for two days.

"My main concern was with what I couldn't see - the brain - rather than the physical impairments as I couldn't let myself think more than a day at a time.

"Gabriel was so happy that he wasn't having seizures - even though he couldn't move his left side, he'd wake up every morning and say 'I didn't have any seizures!'

"At the end of each day, he's say 'They must have taken all the seizures because I haven't had any today!'

"We had brought a sentimental box of happy memories with us to the hospital, and he wore the party hat from his 7th birthday to celebrate having the surgery because he was so happy to not have seizures any more.

"I thought he may not dance again, which broke my heart, but his teacher Kelly assured me that even though paralysed, Gabriel could always be a member of KC's.

"He wasn't really upset that he couldn't move his left side because his physio doctor came round everyday and gave such positive encouragement that Gabriel felt completely confident and looked forward to her daily visits.

Five days after surgery, Gabriel started to get significant movement back on his left side.

His leg progressed quicker than his arm and hand, and the brave boy was able to take his first steps just two and a half weeks after surgery.

Just over five weeks following the procedure, Gabriel managed to start independently moving his fingers on his left hand.

Gabriel was discharged from hospital on 9 July 2019, and since the surgery, he has only endured 10 small seizures lasting around 8 seconds at a time.

His brain is still healing, but four months after surgery, Gabriel is more active than ever and is even flying to Germany this month for a dance competition.

Stephanie said: "It was only after surgery that I have managed to see that I only knew half of Gabriel before.

"Gabriel has always appreciated his life even with the seizures, and is always saying things like 'I love my life' and 'my life is amazing'.

"Just a month after surgery, he took part in a dance competition in Kent and qualified in the para section, guaranteeing him a place in the IDO world championships in Germany later this month, which is just amazing.

"We are still going through uncharted waters because his brain hasn't fully healed yet, as that can take up to a year to heal, so we're just taking things as they come at the moment.

"This means that I spend my days appreciating life with him and fewer seizures, but I'm also nervous and anxious in case things change.

"I didn't realise how down and on edge I have been for the last seven years until I look back on life before surgery.

"Gabriel is my whole entire world and so much more and the thought that I could have lost him to epilepsy makes me sick but at the moment I'm euphoric that we've come this far."