Disgruntled painter and decorator Dean Reeves, 50, said he was driven to drastic measures after being ripped off by a contractor who he says tried to wrangle out of paying what he owed 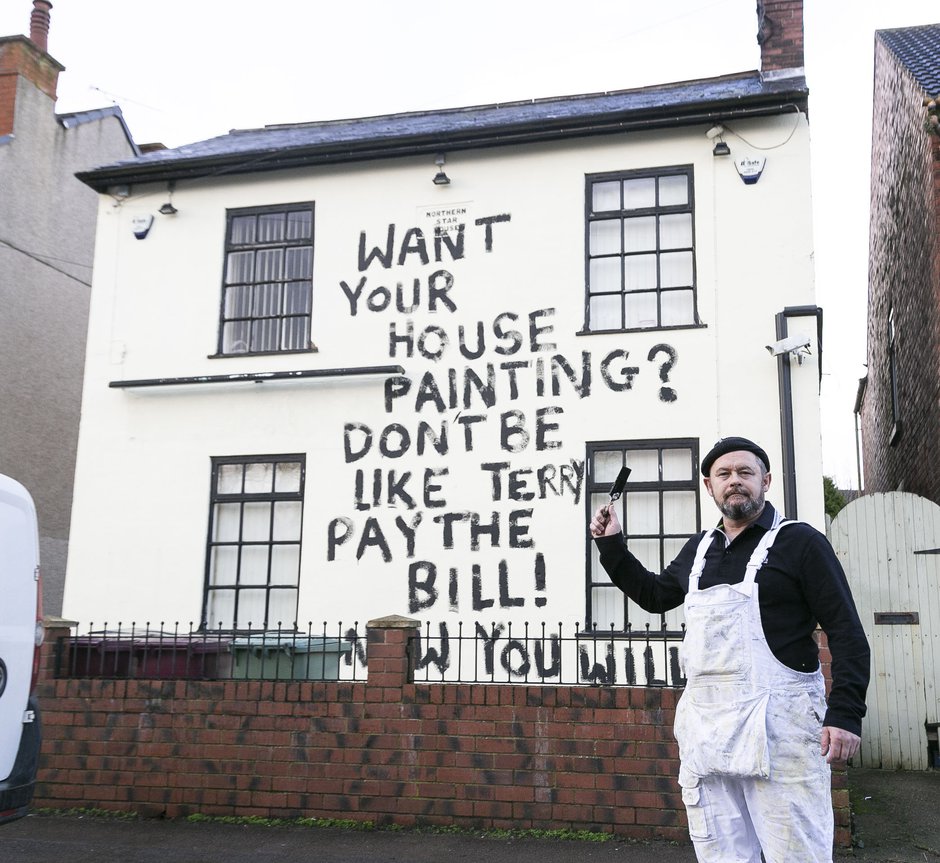 A disgruntled painter and decorator who claims he is owed £500 for his work has taken revenge - by daubing a message on the side of an old pub he had worked on.

Dean Reeves, 50, wrote in large black letters: "Want your house painting? Don’t be like Terry, pay the bill! Now you will!” over the cream exterior he had painted.

Dean claims builder Terry Taylor paid him just £650 of the £1,150 agreed price for the work, but refused to pay the rest until he had done additional work on the building.

He claims he worked through his lunch for a week to get the job done on time on the former North Star Club in Bolsover, Derbs, which is being converted into flats.

However, he says Mr Taylor told him he wouldn't be getting paid the remainder of the cash until he "gave the back of the house another coat".

But the father-of-two says when he did what was asked, Mr Taylor told him "you're not getting paid a penny until you've done the fascias" - which was not part of the original quote.

Disgruntled decorator Dean lavished the cream coloured rendered building with huge black paint encouraging other people not be "like Terry" and pay the bill.

Dean said: "I gave him a quote for the job and he said he would 'ping me the money straight away'.

"But I did the job off ladders, saving him £900 on scaffolding and I took all the signs off myself.

"He changed the job, kept asking me to extra work. He said there was a number of jobs I needed to do before I would get paid.

"I did seven days hard work on it. I didn't have lunch breaks, I worked hard all week to get it done.

"I did the work and he said if I go back to give the back of the building another coat, he would pay me.

"I went back on Tuesday (14 Jan) and did that, but when I sent him a picture, he just said 'that looks better' with a smiling face.

"I asked him where my money was and he said I wasn't going to get a penny until I did the fascias, which we'd never agreed on." 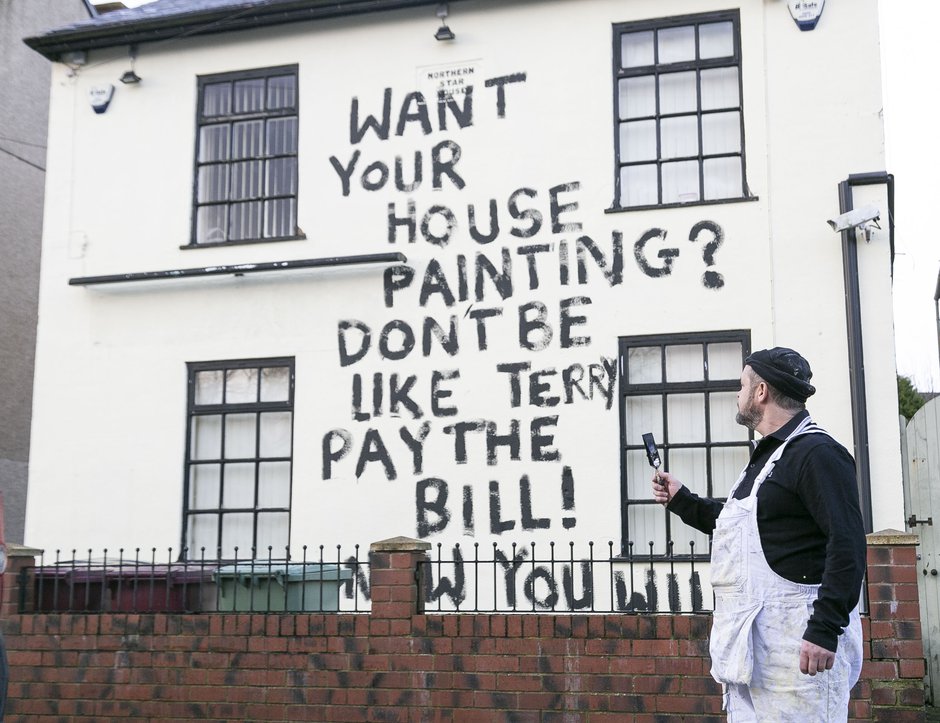 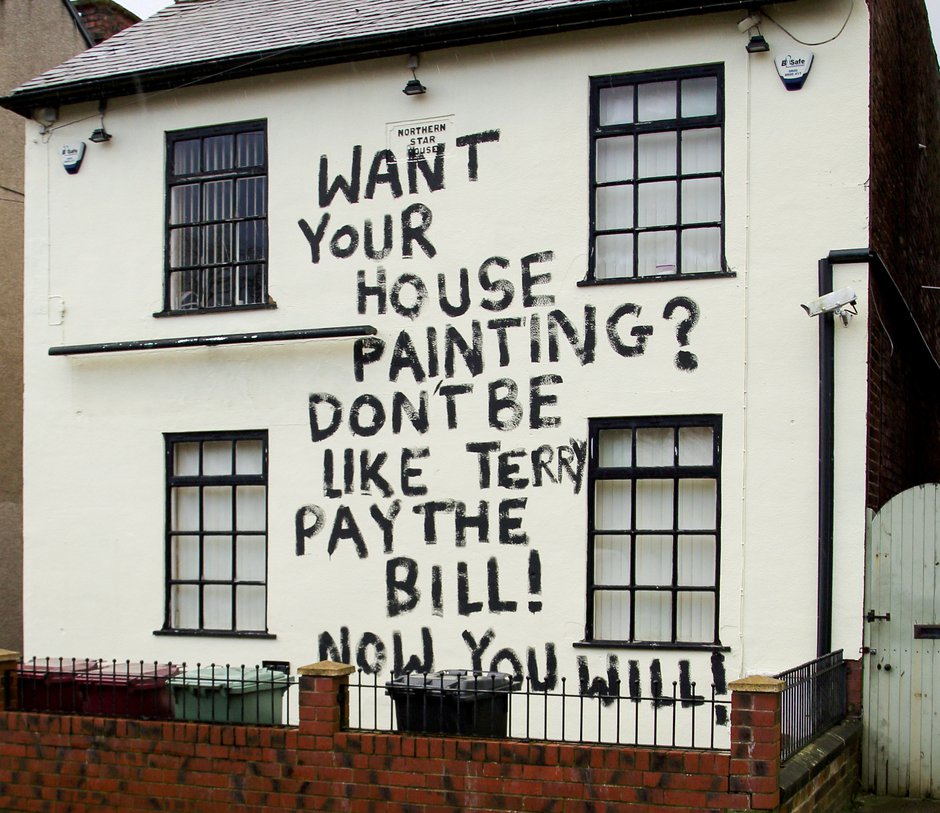 Dean says he took the drastic action two days after being told he was not going to get the £500 he was owed.

He added: "I went back on tea time on Thursday (16 Jan) and did it off ladders.

"It was my first job back since Christmas, I have bills to pay and need to make money.

"It just got too much and I wanted to prove the point. I don't regret it and I'd do it again if I had to.

"I was never going to get paid, but I wanted to make sure he had to pay something to get it cleared off."

When contacted for comment, Mr Taylor has denied ripping Dean off and said he was going to pay in full once the work had been completed.

Mr Taylor said: "The bloke is a prat. He should have just done the work and he would have been paid in full. It’s standard.

"None of what he says is true. He wasn’t asked to do additional work, it was offset work by other jobs he was meant to do but didn’t.

"It was his idea, he said he would do some other jobs to offset what he wasn’t doing. He was getting paid the same to do less work.

"I wasn’t going to pay him for the whole job until he finished it, no one would.

"At the beginning he even said he’d do the work before getting paid at all, but I said no.

"Then, halfway through the job he blackmailed me and asked for all the money up front.

"I’ve spoken to police now and they will be looking to arrest him. He’s going to be done for criminal damage.

"I found out about it last night but I’m completely unbothered. It’s just paint, the idiot.

"I’m the boss, so I’m just going to go round and paint over it. Do his job for him. It’ll be done by the end of the day.

"I don’t understand why you would waste your time painting that nonsense instead of doing your job, when in that time you could have finished it.

"This is the first and last time I’m working with this man."

A Derbyshire police spokesman said: “We received a call this morning reporting that a property in Welbeck Road, Bolsover had had graffiti painted onto it.

“It appears to be a dispute between two parties and we will be getting in touch with those involved in due course.”