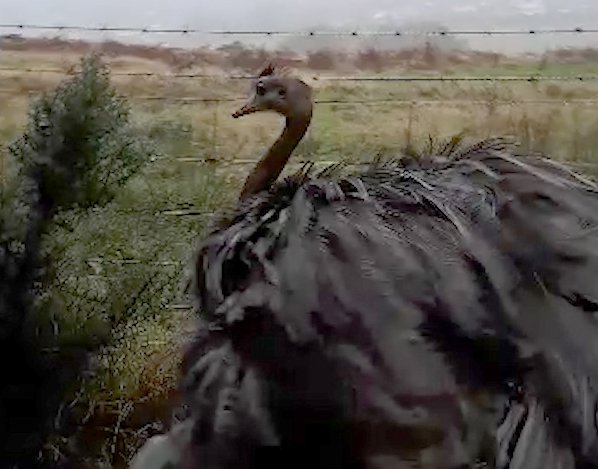 A dog walker was left stunned after seeing this massive RHEA bird - in a forest already known as the capital of Britain's booming wild boar population.

Shocked Jason Burford was out walking his dog Molly in the Forest of Dean when he stumbled upon the huge 6ft avian.

The 48-year-old was stopped in his tracks by the sight of the bird rounding a corner.

He then advanced towards creature and filmed it on his phone before it eventually ran off into the distance.

An animal expert has confirmed it is likely the bird escaped from a local collection.

Jason has already seen wild boar in the area which is currently one of the centres of the UK's booming population.

Boars there have attacked animals, people, dug up gardens and playing fields and have even learned when bin day is so they can rummage in them for food.

Jason, who keeps chickens and bantams at home, said: "I hadn't been there for years but I went on a whim as I used to live there.

"I just rounded the corner and there it was. I'm used to it though, living in the forest. I wasn't worried.

"The dog is good around other animals. But, for someone else, it could have been a shock.

"It could have done an untrained dog some damage. Some don't even come back to their owners in the garden.

"It's a funny story but it could have been nasty. I was just trying to get it off the track." 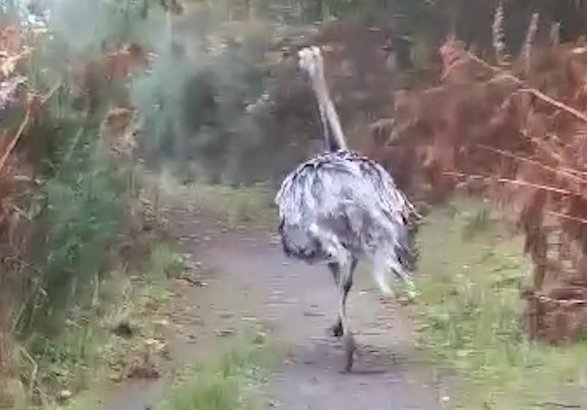 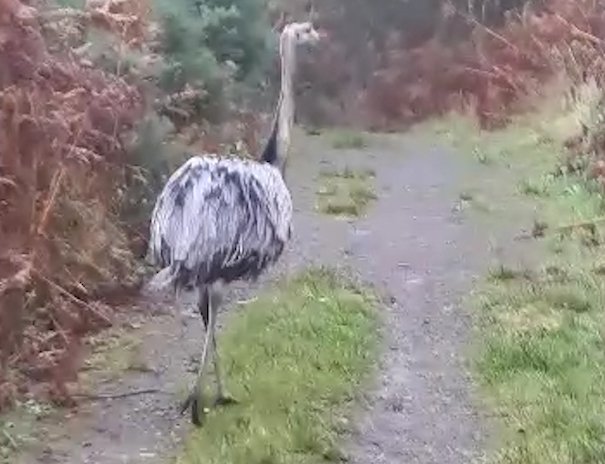 Retired Jason, from Cinderford, Glos., said the bird was almost six feet tall from where he was standing - making for an imposing sight.

He added: "I stopped videoing but you want to see it with its feathers fully stretched out!"

Mr Burford claims that the bird escaped from a nearby field where some animals had been abandoned.

He said: "I've since discovered where it came from. It's been reported to the RSPCA."

Rheas are not the only large animals to be running free in the Forest of Dean.

The area has also suffered problems with aggressive wild boars in recent years - something Mr Burford has experienced firsthand.

He said: "I have had them run at me and chase the dog. You don't want that happening. They really frighten you.

"Once the dog ran off into the bushes and a huge boar suddenly appeared. Well the dog came straight at me - so the boar came too!

"I'd watched a film about bears the night before and it said what you have to do is make yourself big and scream 'AAAARGH' so I thought I'd do that.

"The boar just stopped in its tracks and left! They're a pain in the a**."

A spokeswoman for the Royal Society for the Protection of Birds confirmed the bird was a rhea yesterday (Tues).

She added that is had likely escaped from a local collection.

Jason spotted the bird on November 3 in the area of Drybrook, Glos. Molly is a cross between a Border Collie and a Labrador.