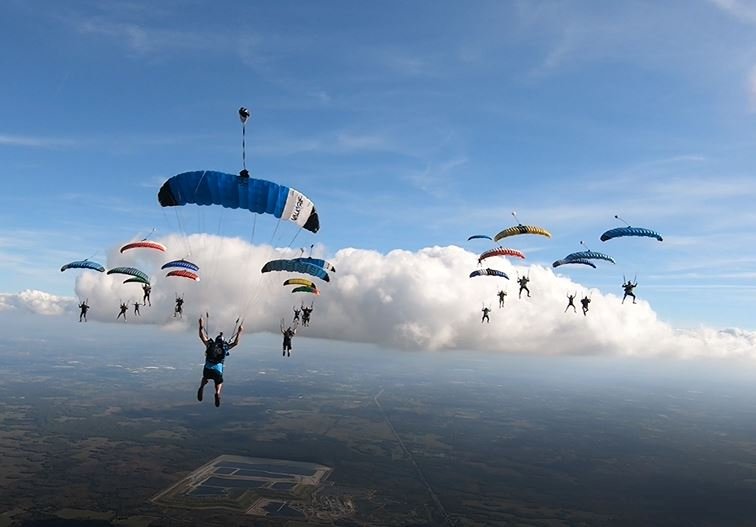 This mesmerising footage shows a talented group of skydivers moving in a perfectly synchronised pattern that looks like - a SPEEDING TRAIN.

The footage shows a skills training event known as ‘Flock and flow’ organised by ‘Momentum flight’.

The footage shows skydivers performing 360 degree rolls in the air and lining themselves up in perfect patterns.

The highlight of the day comes when a perfectly timed ‘train’ of skydivers speeds through the middle of two other lines of their fellow Skydivers.

The footage was captured by Momentum Flight on March 12th and 14th 2020, just days before the national shutdown brought on by the Covid-19 pandemic

"I used to be an engineering manager but gave it up to travel the world and teach canopy piloting.

“There was about three months of group preparation for planning the jumps, testing out some new ideas, and then trying them out before the camp.

"Myself and Max Manow have been jumping together for over four years and have hundreds of jumps together doing stunt work, exhibition projects, having fun and try out new things to teach the world.

"Between the three of us we have collectively amassed more than 23,000+ jumps in the sport and bring that knowledge to the camps.

“This footage not only reminds me of a time not in quarantine but more seriously it reminds me of the impact we had on so many students lives in four days.

"The skills they learned, the excitement. This is what I see when I watch the footage.”