ADVENTURE CAT - Meet the curious cat who hikes, bikes, paddleboards and even goes SKIING with his devoted owner.

Adorable Bodhi has completed a three-day biking tour through the Canadian Rockies, been cross-country skiing and wears his own life jacket when he goes paddleboarding. 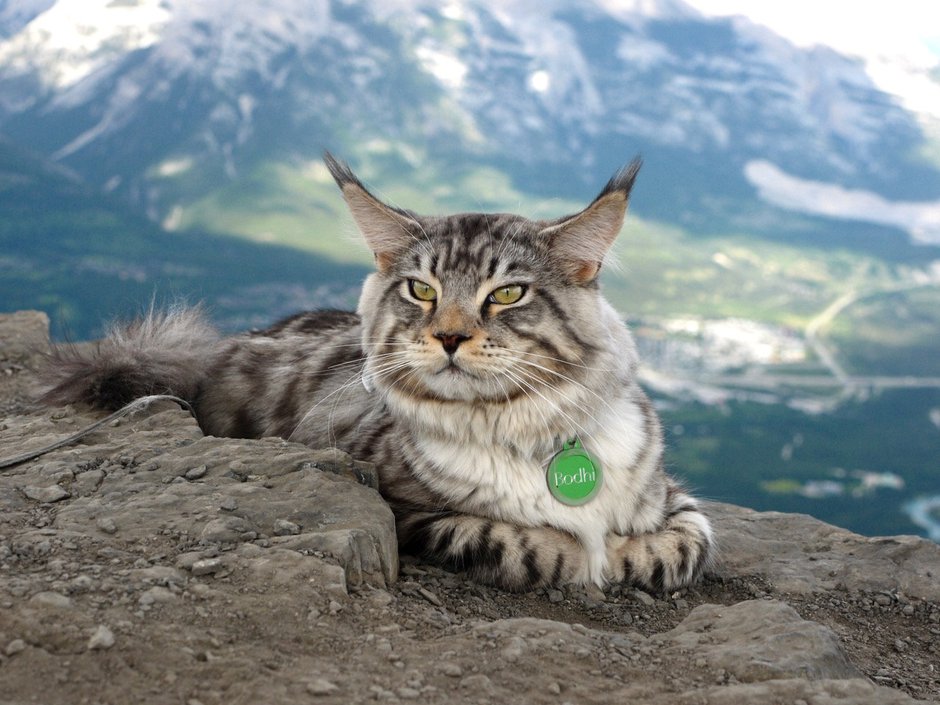 Meet Bodhi - the curious cat who hikes, bikes, paddleboards and even goes SKIING with his devoted owner.

Adorable Bodhi has completed a three-day biking tour through the Canadian Rockies, been cross-country skiing and wears his own life jacket when he goes paddleboarding.

Owner Michelle Gagnon, 50, calls Bodhi her "adventure cat" and has been teaching him a host of adrenaline-packed pursuits for the last ten months.

Michelle, a retired hiking guide, of Canmore, Alberta, Canada, said: "An adventure cat is a term I made up 18 years ago when I got my old cat Bugaboo.

"An adventure cat comes along with you on adventures whether that means he's sitting in a bike basket or walking alongside you or sitting on your shoulders."

Bodhi, 14-month-old Maine Coon cat, has a robust build, weighing a staggering 16 pounds (7.3kg) - about twice the size of the average tabby.

Maine Coons are classified as the largest domesticated cat breed and are one of the oldest natural breeds in North America. They are native to the state of Maine, where it is the official state cat.

Michelle says training a cat to cope with the great outdoors can be a difficult feat as felines like to feel in control of their environment.

She said: "Cats have this real desire to keep themselves safe and they have a very high instinctual survival mode.

"They have to be in control of everything and training a cat is about getting them used to everything outside, like wide open spaces and walking on sidewalks.

"I'm putting in lots of hours in training and getting Bodhi to walk as much as possible.

"He is now way better with wide open spaces and walking on a trail and understanding that wildlife moves around him."

She added: "I didn't know how I was going to train him in the winter time but I just decided to take him cross-country skiing.

"Sitting on my shoulders is always his safe spot. He has also been hiking in the mountains, his furthest hike is almost 6km.

"The biggest thing that slows him down is wild animal smells and that's a very real
thing living where we do in Canmore.

"If it's a predator like a cougar or a coyote, it can really slow him down and even stop him." 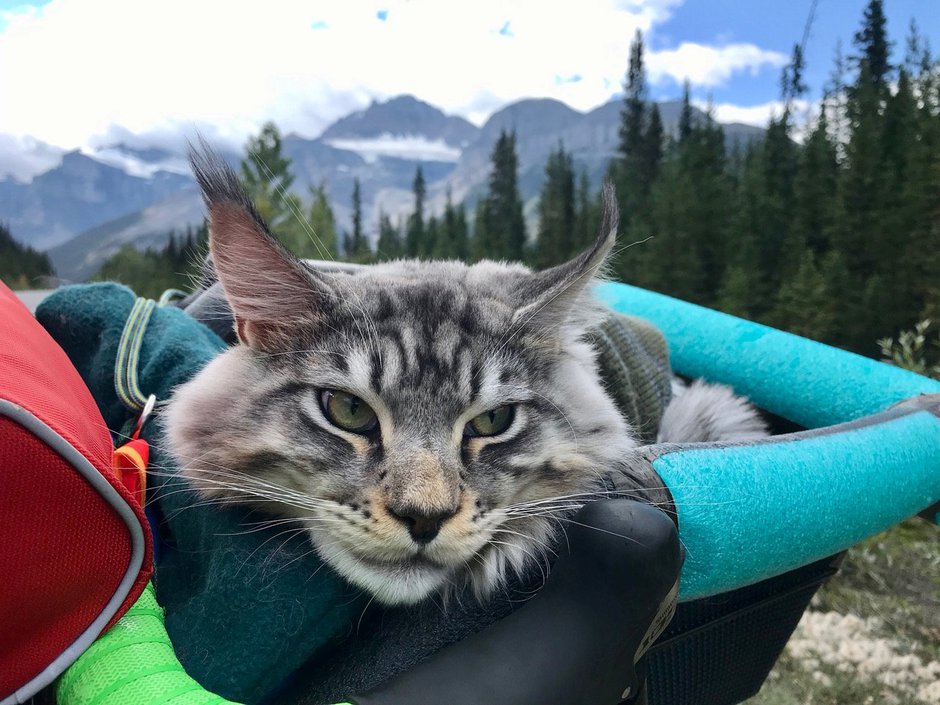 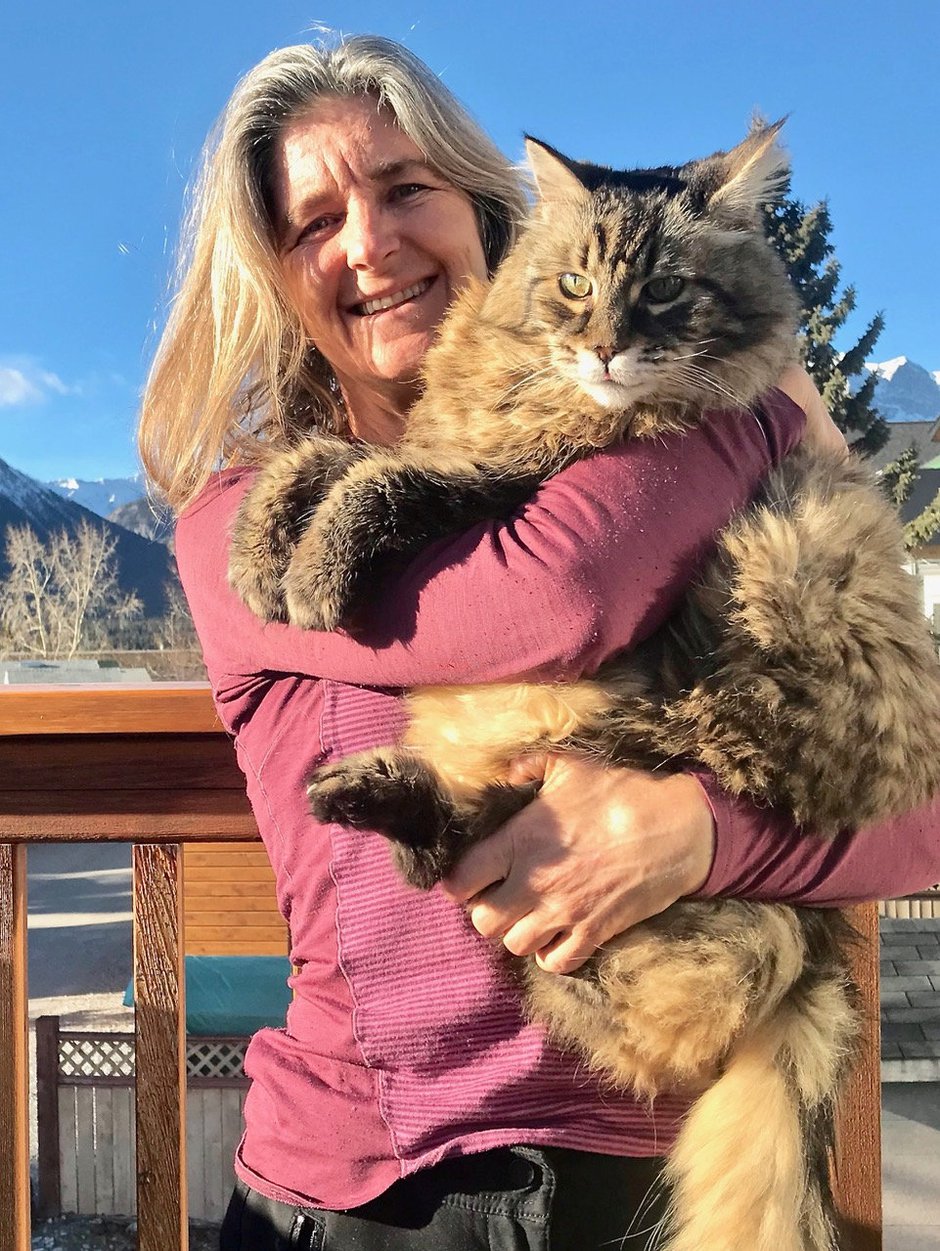 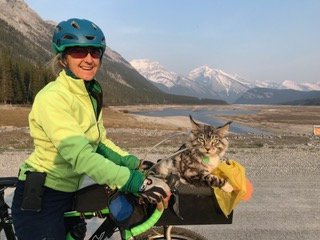 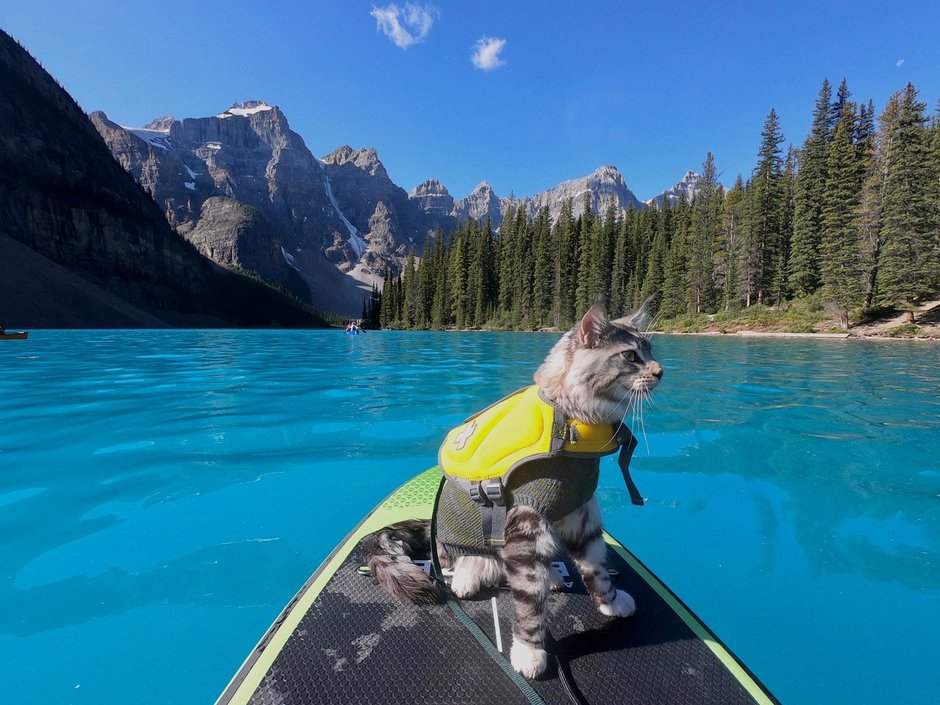 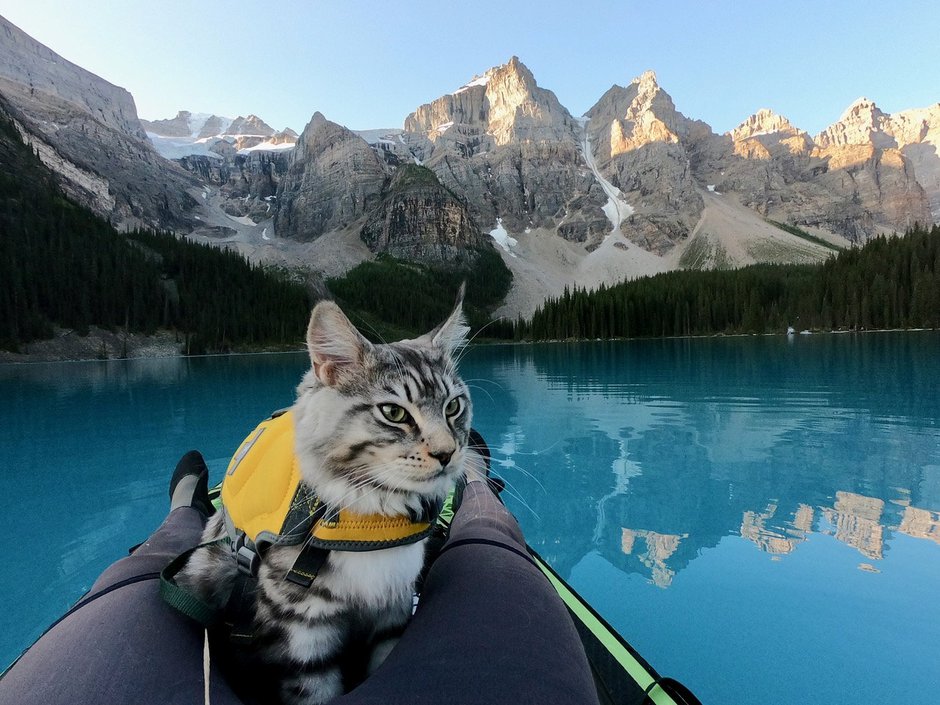 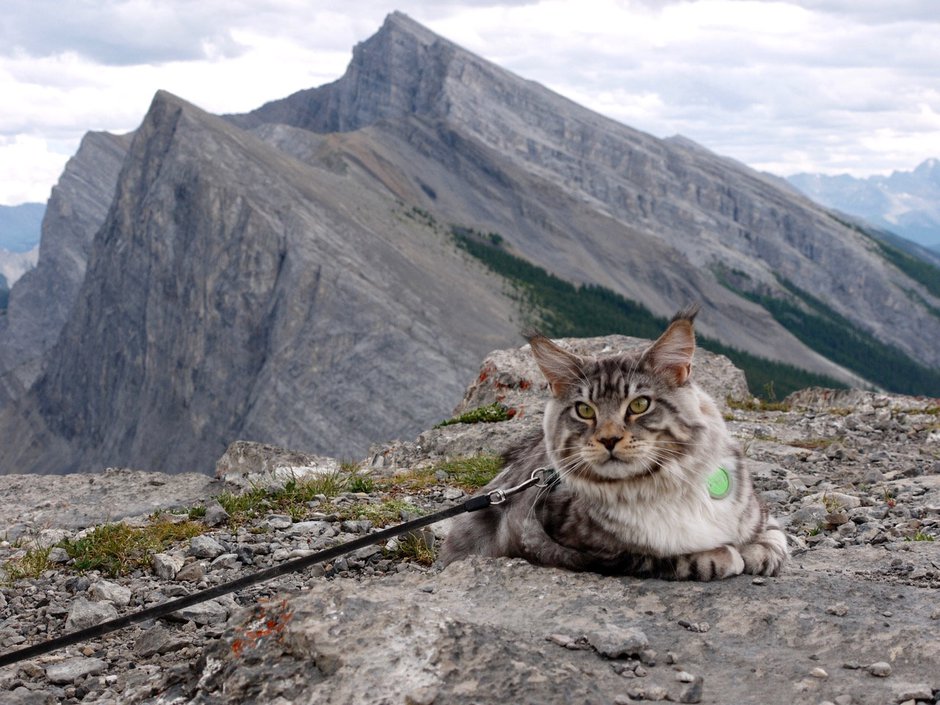 Michelle added: "He has done stand up paddleboarding. He wears a little life jacket when he's on his paddleboard.

"He has gone a couple of big bike tours and we have biked some of the most scenic roads of the Canadian Rockies.

"One was two-days long and the other was three-days long. I made him a special basket for the front of my bike. We did 100km a day."

Michelle, who named Bodhi after the Sanskrit term for enlightenment, said that she considers the beautiful cat her child.

"Bugaboo was definitely my baby and when he died last November, I felt like I had lost a child. Now Bodhi is like my next child.

"I want him to have positive experiences on all of our adventures and build his confidence. You have to make it interesting for them.

"I try not to use treats as then they just want more treats. I try to use a lot of positive encouragement."