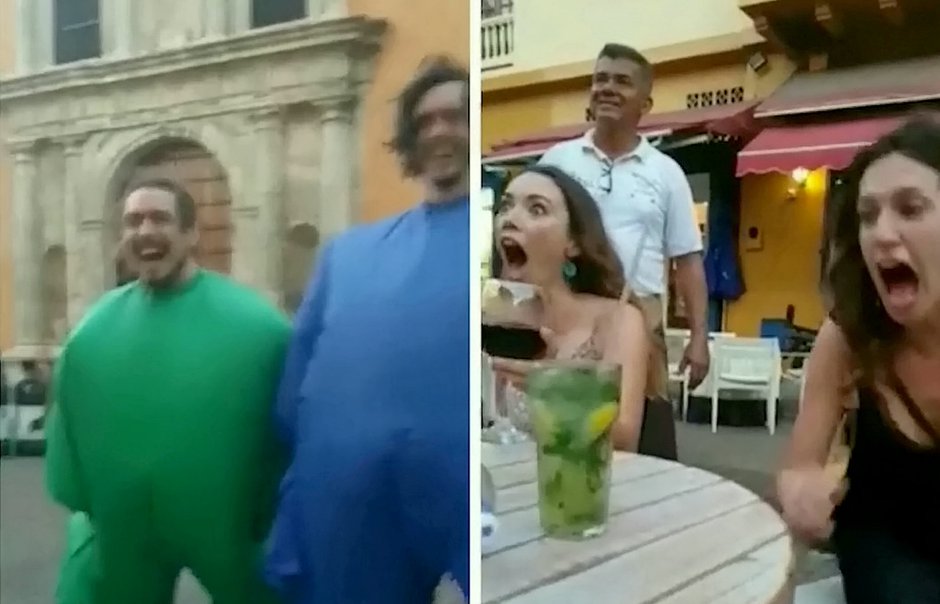 This is the moment two men pulled off the perfect romantic surprise by disguising themselves as street performers to stun their partners on holiday in Colombia.

Jonny Rhodes, 28, and Tom Mitchell, 27, booked secret flights so they reunite with their girlfriends who are currently touring through South America.

But the duo took their surprise act one step further by learning a synchronised dance routine and dressing up in inflatable morph suits.

Video footage then shows them performing a choreographed dance flawlessly to roars of laughter before they revealed their true identities to their open-mouthed partners.

They then whisked them off to a nearby five-star hotel.

Jonny's partner Ellie Websdale, 26, said: "It was very emotional - it  was the most shocked I've ever been in my entire life.

"I couldn't believe it."

Emily Potter, 27, Tom's partner, added: "It was the shock of my life, my legs were quaking like a little quivering leaf.

"It was the best surprise ever, well done chaps.

"We thought it was a couple of Colombians doing an elaborate bag heist - trying to distract us before nicking all our cash and passports."

The two men - both DJs from Bristol who perform as TWOGOOD - had spent months planning their secret trip that included finding a suitable costume and figuring out exactly where their partners would be when they arrived.

Tom and Jonny had initially told them they couldn't join them on their travelling adventures due to work commitments. 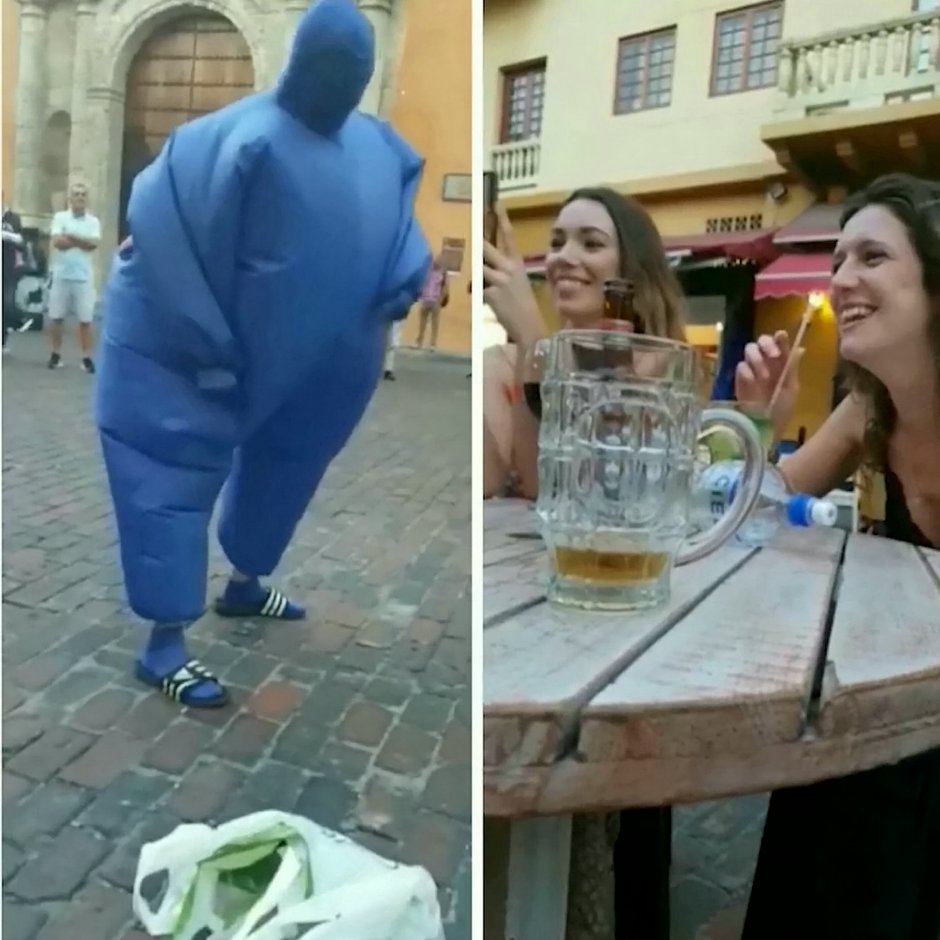 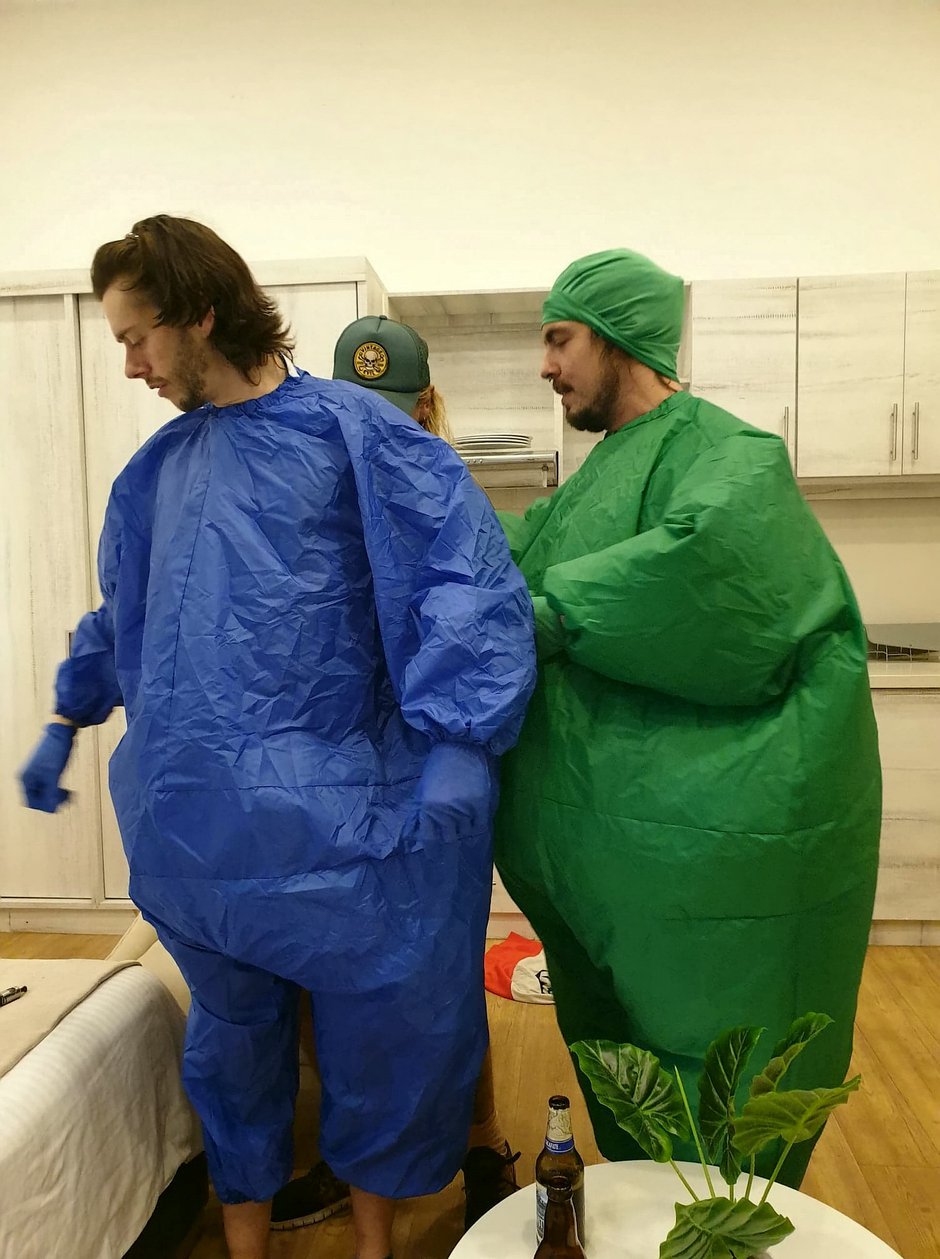 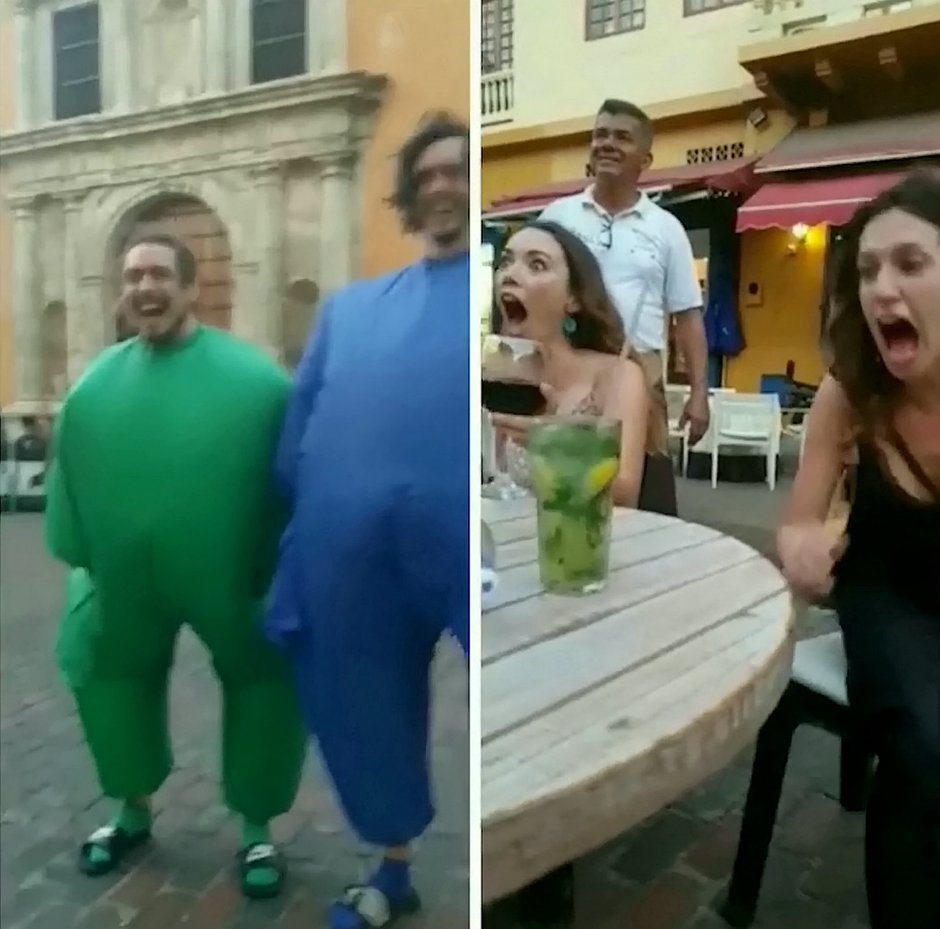 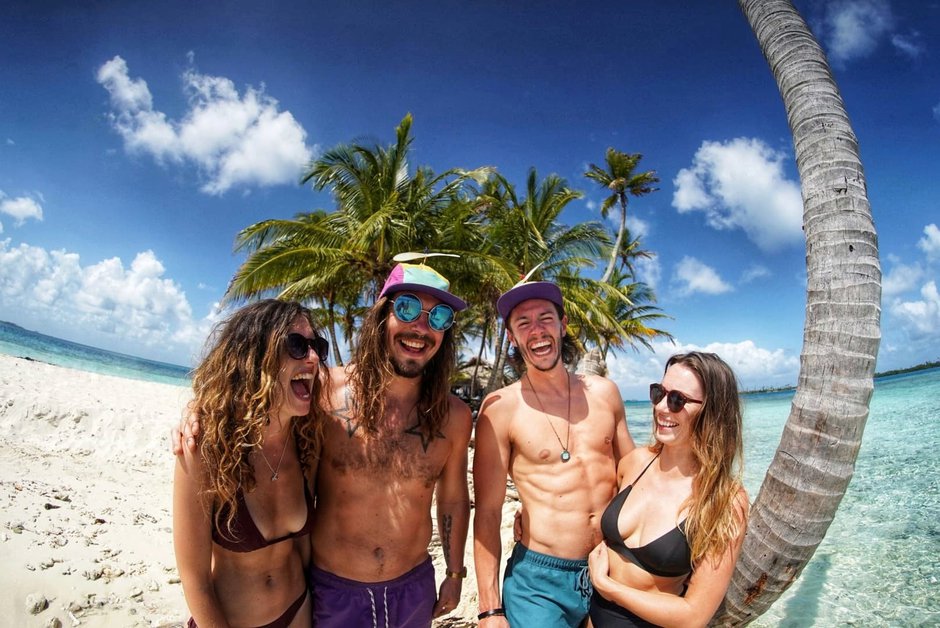 Jonny said: "We realised we had to find a disguise, so the first idea we came up with was to hire a mule and dress up as Colombian singers and serenade them with songs.

"Then we came up with the plan to do a synchronised dance and be street performers, and wear masks and morph suits - but we realised that if we wore morph suits they would see our body shapes and that would maybe give it away.

"We did some digging on the internet and found some inflatable morph suits and we thought they were perfect, they'd never be able to guess it was us."

Jonny said it took all their detective skills to confirm where the partners would be on the day.

He added: "So we had the outfits set and the only thing now was to locate exactly where they were going to be.

"We had some friends out there and they could tell us where they would be on what day, and luckily my brother Chris was out there travelling already so he arranged to meet them on the day so we would know exactly where they were."

They flew into Medellin on the February 13 before taking a 14 hour coach journey to Cartagena.

With the plan set, the duo inflated their brightly coloured morph suits and hailed a taxi, before heading to perform their dance routine for their unaware girlfriends.

Tom said: "We could barely see through the masks to locate the girls table, so we had to act as if we were actual performers.

"We spent about five minutes with the general public first going down the street and entertaining them before we made it over to their table.

"Then we pressed play on the bluetooth speaker and then did the dance and did the grand reveal which you could see on the video."

In the video, Jonny and Tom can be seen dancing arm in arm and spinning round each other, before encouraging Ellie, and Emily to join in.

Then, after the girls sat back down, the duo bowed and stood side by side before ripping off their masks and revealing their true identities - and the girls instantly start to scream.

Tom added: "When the girls screamed everyone in the square went silent and the police came out, no one knew what was going on.

"Then everyone applauded and cheered when they realised that obviously this must be a reuniting of two couples."