Liam Critchett, 24, is steadily defying doctors who doubted he would be able to walk again after being diagnosed with spinal cancer aged 11 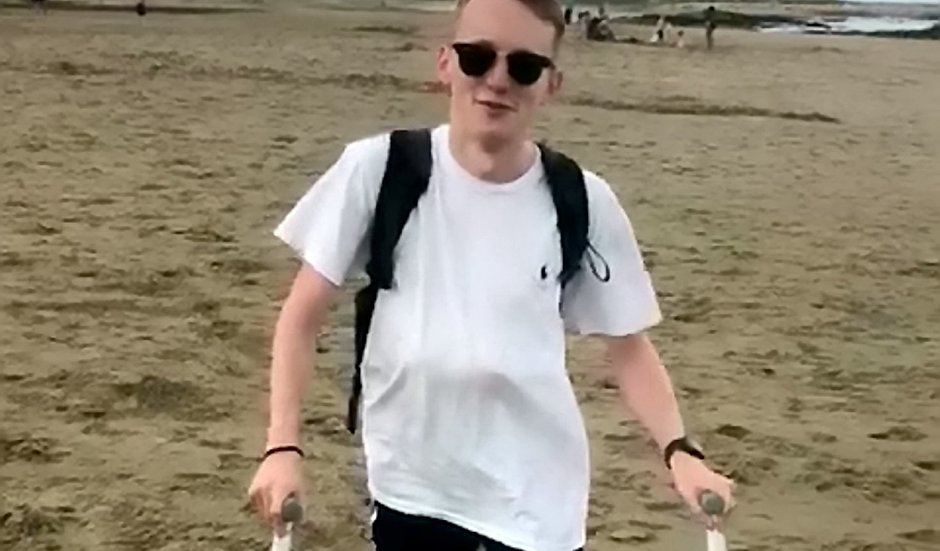 This is the moment a man who has spent 13 years in a wheelchair took his first independent steps - after defying doctors and walking again.

Liam Critchett, 24, was able to stroll unaided along his favourite childhood beach.

Doctors doubted he would be able to walk again after being diagnosed with spinal cancer aged 11.

The diagnosis saw him wheelchair-bound throughout his school years and spending the majority of his youth in hospital undergoing a whopping 50 operations to try and rid his body of the cancer.

But in January 2018 doctors told Liam his tumour started to grow back.

But now Liam is in his third year of intense physiotherapy and last summer took his first independent steps on a beach - the first time in over a decade.

He is now hoping to raise £13,500 to continue his private physio sessions to reach his goal of being able to walk again unaided.

Liam, from Scarborough, said: "Despite what I've been through and what I was told, I was just dead set on one day being able to walk again.

"Growing up I spent my time constantly in and out of hospital. I've had so many operations I've lost count but it's somewhere at the 40-50 mark.

"This past year has been incredible and I've made a lot of progress and want to keep that going.

"After years of hard work I was able to take my first steps outside on crutches.

"I also walked across the beach where I would spend my childhood summers.

"Not a lot of people will say this but coming home to find sand in your shoes and socks was quite a remarkable feeling. I haven't felt anything like that in years!

"I hope to show you can change almost anything through hard work."

Liam was diagnosed with a spinal cancer aged 11. 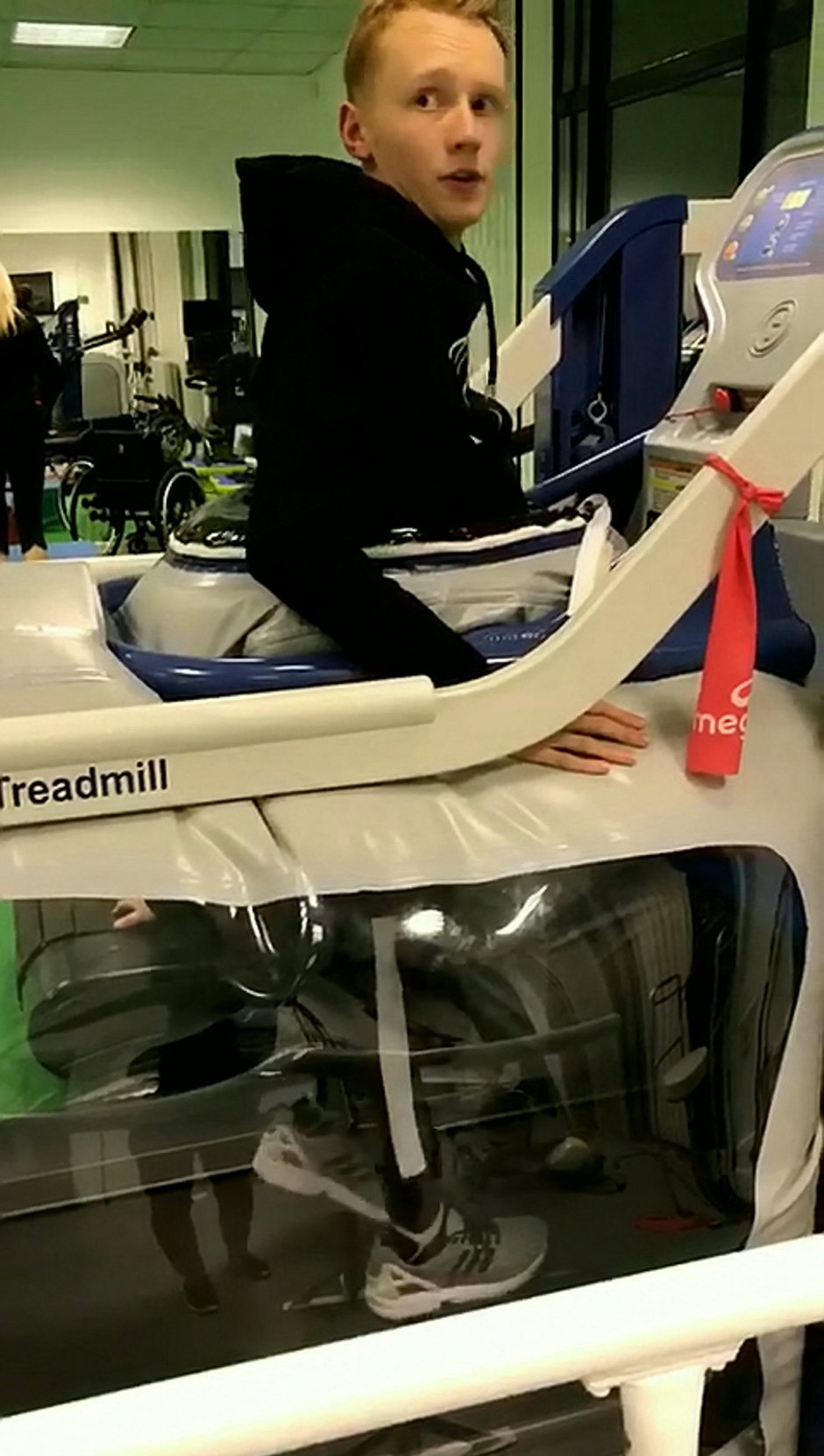 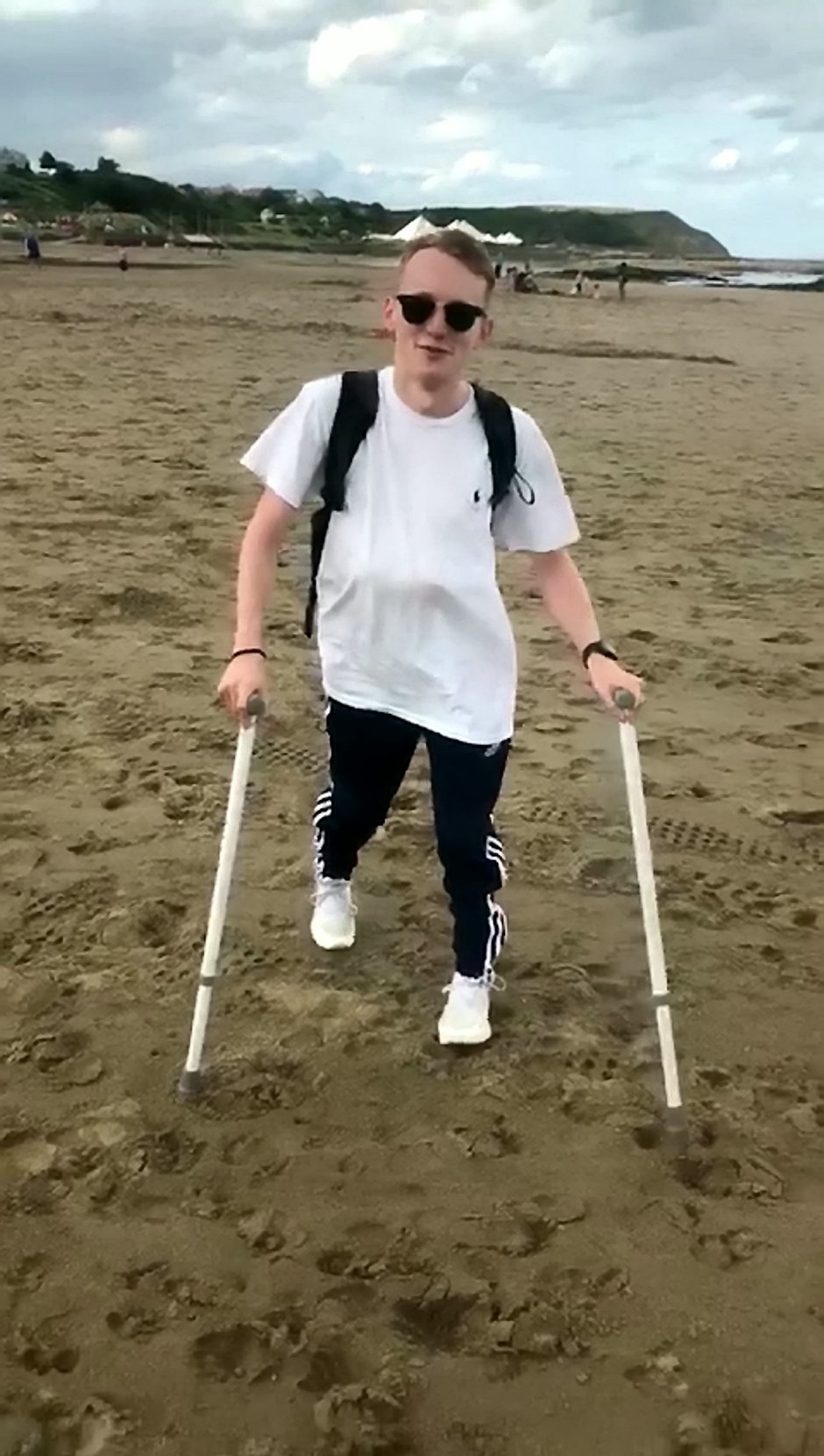 He started 14 months of chemotherapy but during the last cycle his body went into septic shock and doctors decided to stop.

He underwent two 14-hour operation to reduce the tumour and was fitted with spinal rods which had to be refitted every six months as he continued to grow.

In 2008, he was fitted with permanent rods but within six months they became infected and had to be removed.

Liam was then told he would have to have his spine fused, which stiffened his movement.

Liam said: "I remember I kept feeling very ill and kept waking up with bad headaches.

"At the time I was a really active and sporty person.

"I was really into football, tennis, cricket - I was always running about and seeming healthy.

"Then I started noticing I was struggling to walk so I was referred by the doctors to go to hospital and have a scan.

"I remember being with my aunt because my parents were in London but as soon as they were told they took a taxi to Leeds.

"At the time I didn't know what was going on but I remember them crying.

"It was just such a shock.

"The rods ended up causing a lot of nerve damage from my hips down and I had to keep going back up to Leeds for orthopaedic procedures and surgeries.

"When I had my spine fused it meant it wouldn't develop any curvature and made everything in a more fixed position.

"I managed to fight through and still sit my exams. I even made it to prom which meant an awful lot." 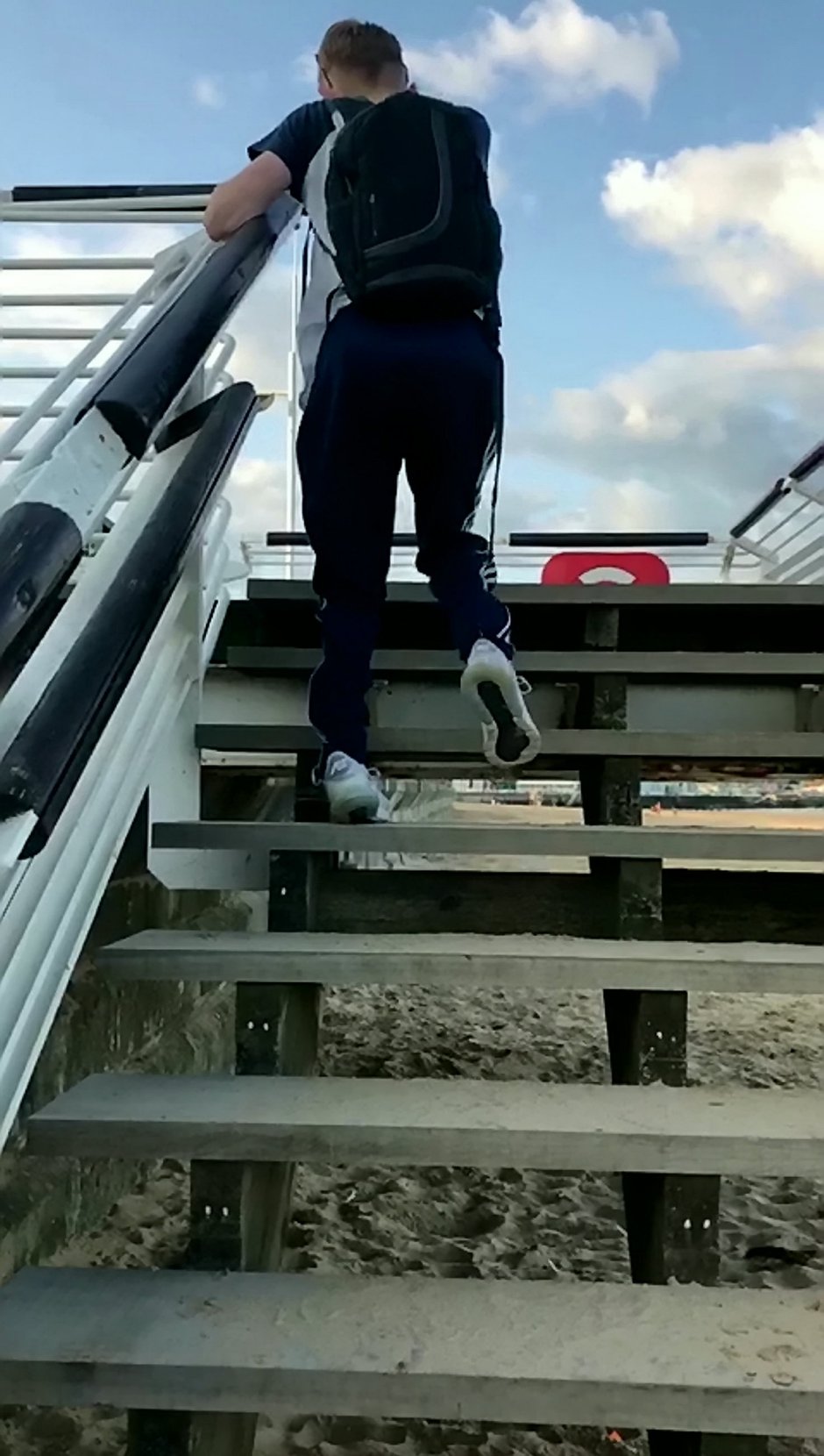 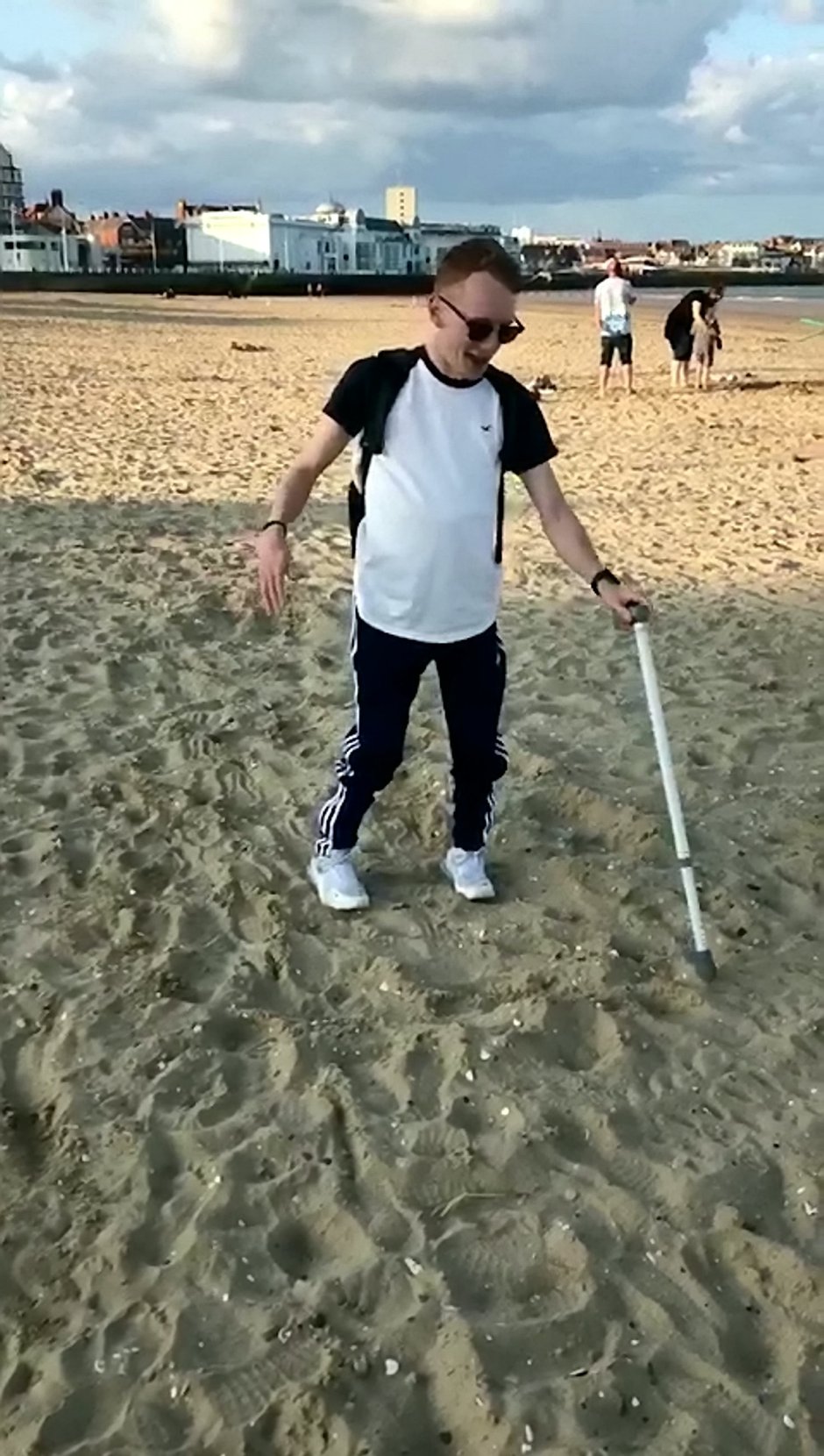 After finishing college, Liam started a full-time job as a tendering engineer and decided to take up sports again to help build his stamina so he could pursue a more intense physio course.

But during his road to recovery Liam was dealt another devastating blow in January 2018 when he told his cancer had returned.

Liam said: "For it to grow back ten years after being stable was just heartbreaking.

"It was extremely hard to take but with the support of my family and friends I got through it.

"Remarkably it was the first time I had made a full and speedy recovery.

"I continued with the high-intense physio plan which was great.

"I even had a football back at my feet for the first time in ten years.

"I was being pushed out my comfort zone but I knew I needed to do that if I was going to see any progress.

"Taking my first learning steps in an open space felt like a miracle.

"This was something doctors said I would never do again.

"This has made me determined to never give up." 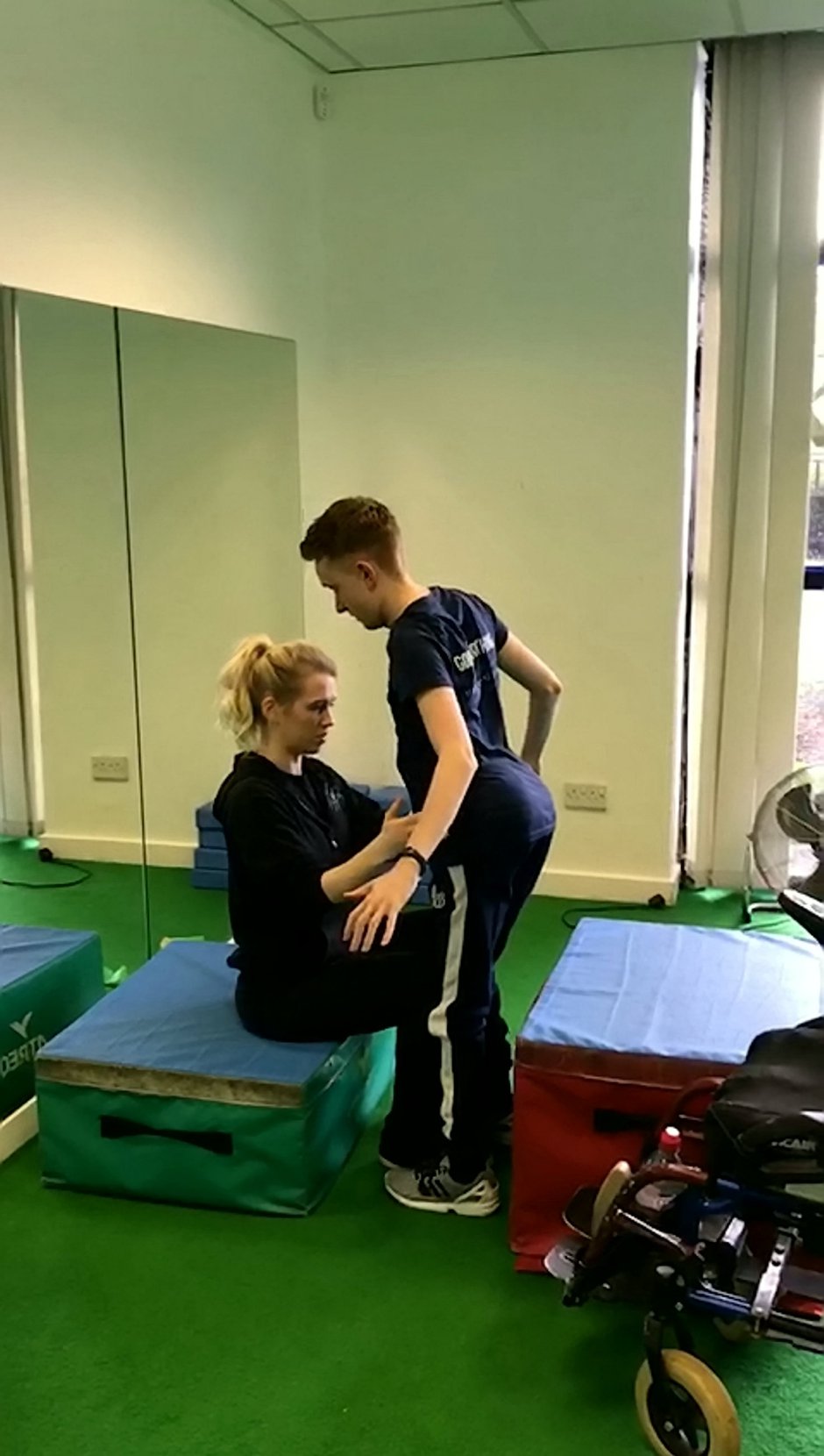 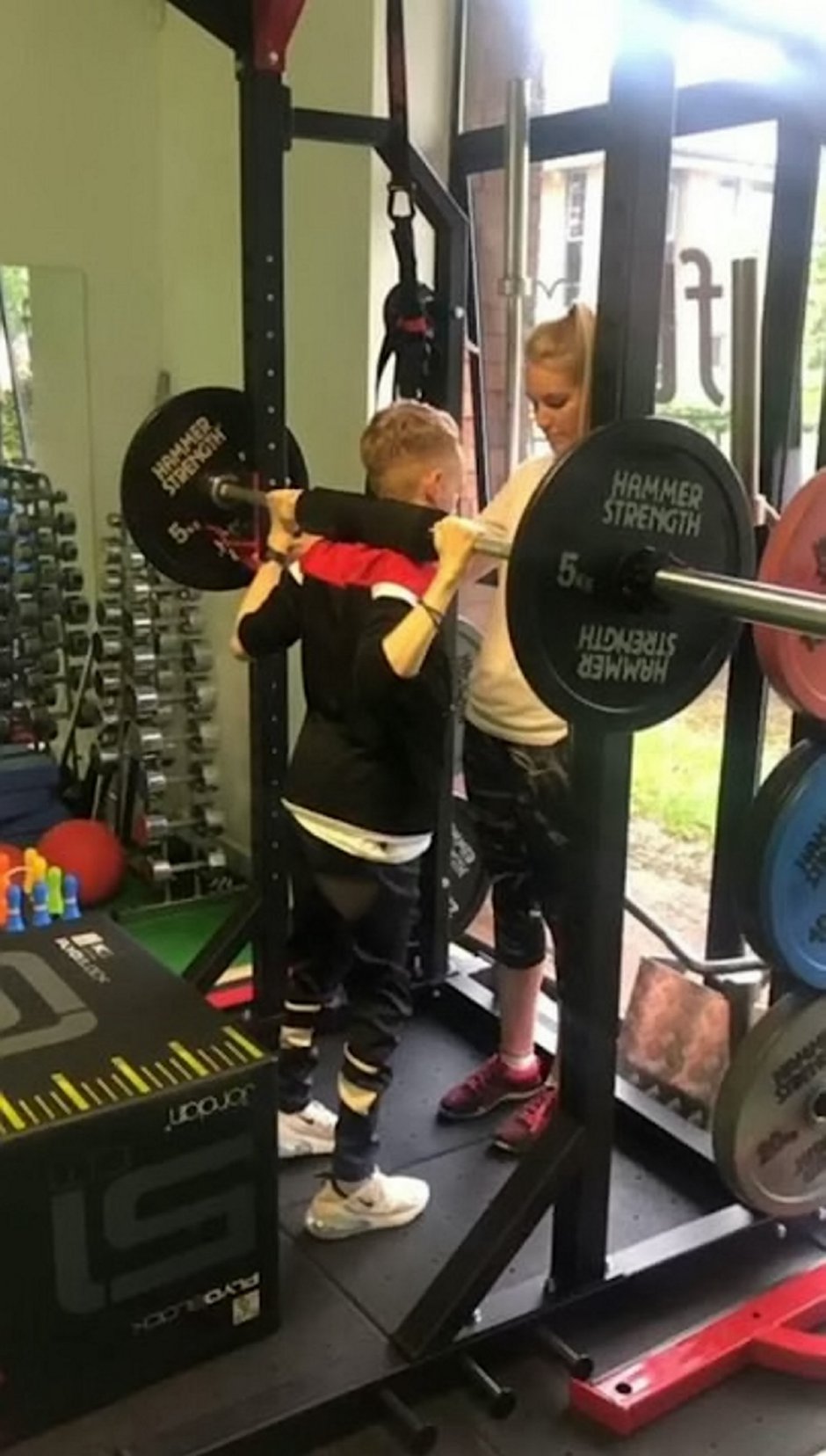 He continued his intense physio and became determined he would walk independently again.

Last summer Liam took his first steps on his hometown beach in just over a decade.

Liam said: "At the moment I'm 75:25 in terms of being in my wheelchair and walking on the crutches.

"It's more of a psychological thing to have someone nearby.

"But I managed to do it all myself.

"Not a lot of people will say this but coming home to find sand in your shoes and socks was quite a remarkable feeling. I haven't felt anything like that in years!"

He said: "I'm really pleased with my progress and continuing with the sessions will help to push my body to the maximum.

"Unfortunately due to the strain on specialist physiotherapists in the NHS and the sheer amount of patients they have to attend to the help I need isn't available on the NHS.

"My walking technique is improving during every single session.

"Last summer I was able to take outdoor walks unaided.

"Almost 11 years hometown beach every day of my childhood summer. It was a special moment for me.

"It has just completely boosted my confidence. I am just so grateful for those who have supported me in my progress. I would have never have got this far.

"My physios saying we are half-way through and everything going in the right direction.

"The best thing is hearing other people starting their own journeys after watching my videos."