Claire Montello, 39, was retrieving her MP3 player from the Ottoman’s storage space when a hinge mechanism failed and the top half fell on her left arm 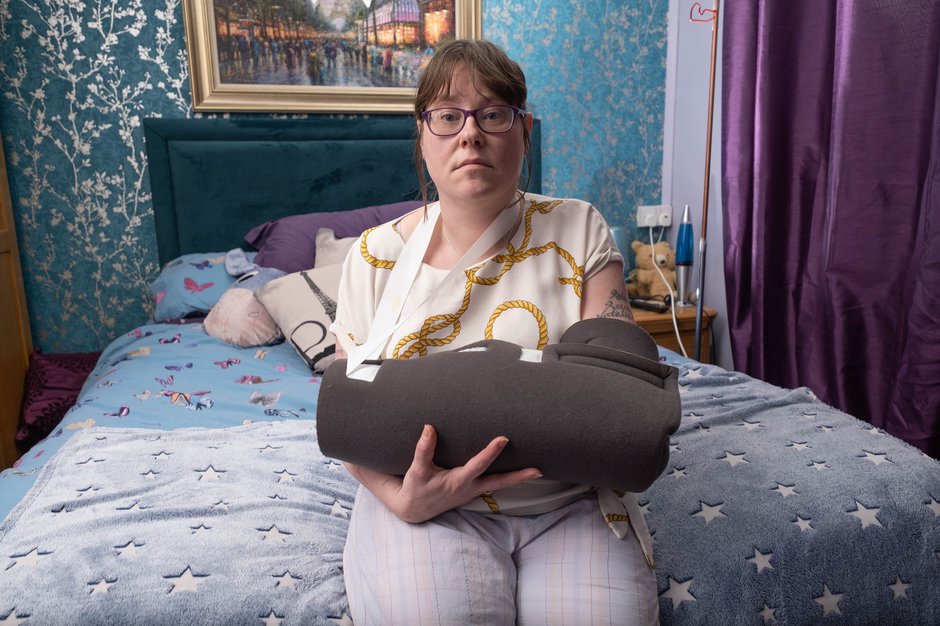 A mum has told how her she feared she'd die after she got trapped under her bed -- for 13 HOURS.

Claire Montello, 39, pulled up her hinged Ottoman style bed to grab her MP3 player from the underbed storage.

The mum-of-three was reaching inside when the piston holding up the mattress failed - and the entire bed top crashed down on her arm.

She was trapped because she didn't have the strength in her one free arm to lift the bed up - and her phone was out of reach - and she feared she'd die.

Terrified Claire screamed and shouted to no avail and even had to lean on the bed - further compressing her arm - when her legs grew too tired to stand.

She was only set free when her husband Francesco, 61, came home from his night shift and lifted the bed up. 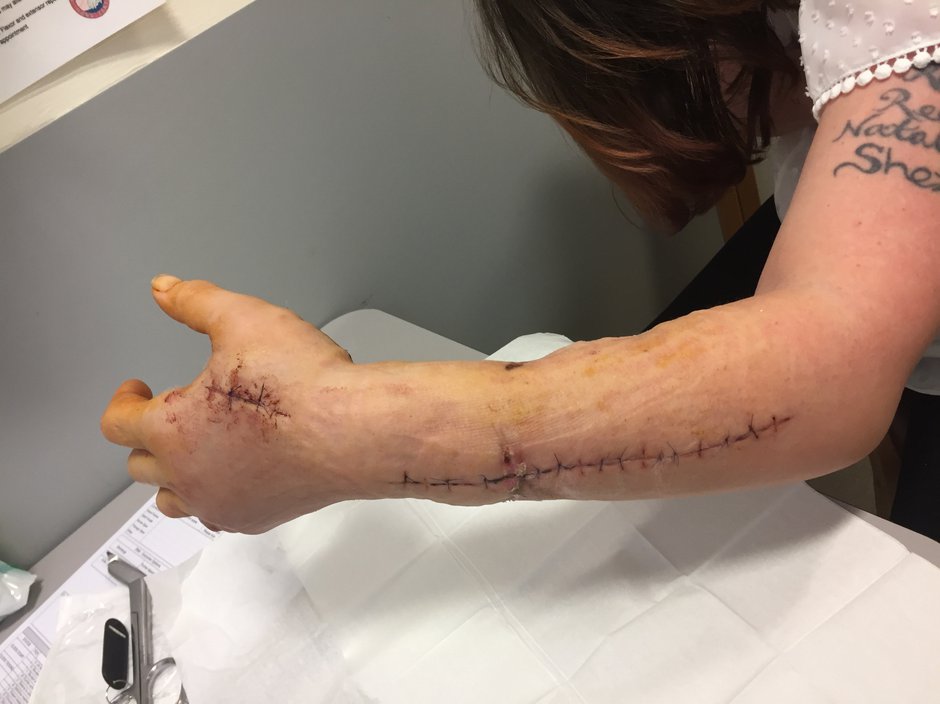 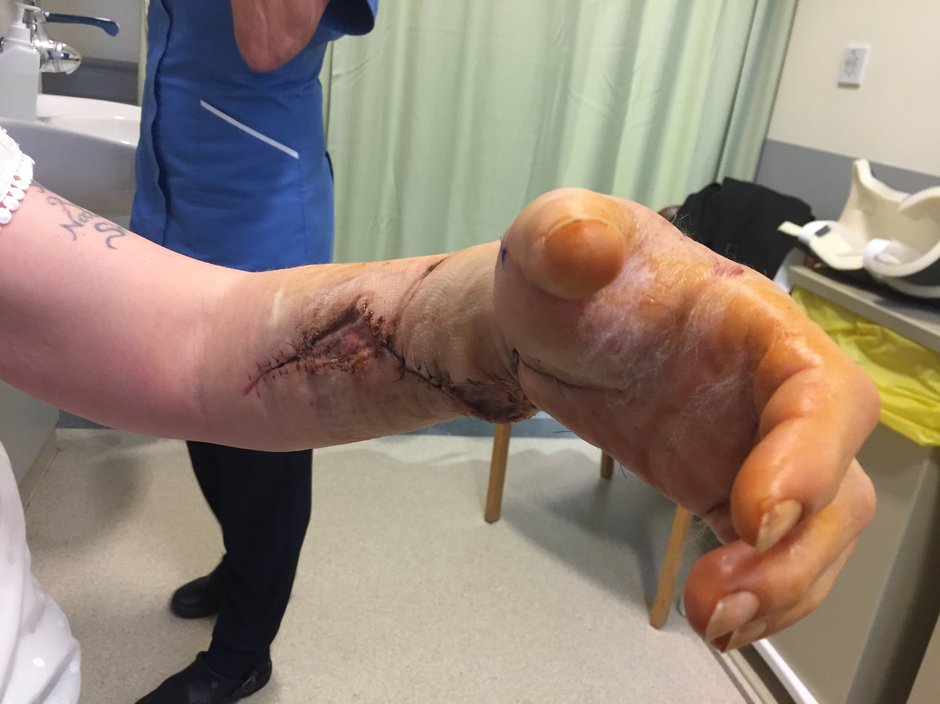 Claire from Grangewood, Chesterfield, said her arm was "flat as a pancake" but it then swelled up dramatically, before it "burst".

She spent two weeks in hospital where she endured four operations, and is waiting to see if she'll regain the use of her left arm.

"I thought I was going to die.

'I had to keep making myself sick to keep the moisture in my mouth as a way to survive.

"I must have vomited about 40 times.

"Because the wardrobe was right next to the bed I couldn't even sit down.

"I knew Francesco wouldn't be back until the morning so I had no choice but to sit on the bed. I couldn't stand up for that long.

"I couldn't sleep through it I was in so much agony.

"I'm surprised I didn't pass out of the pain but I was and for the whole 13 hours."

Claire was home alone at 9.30pm on 23 January and went to get her MP3 from underneath her bed to listen to music.

Her MP3 player fell down a gap in the middle of her bed - which is split in half, with two sides which can be lifted up on a hinge near the wall, to access storage beneath.

She jumped off, lifted up one side, and was reaching under the raised mattress, when the bed smashed down on her arm - trapping it from the elbow down.

With her mobile phone out of reach and unable to lift the king-size bed up by herself, Claire said she thought she'd die.

She said: "I was screaming and shouting to get some kind of response but it doesn't help that I live next door to a 92-year-old man whose deaf.

"I could hear his TV.

"All the lights were on in my house so the chances of me getting some kip were nil.

"I had BBC News on loop and it was doing my head in. I was sitting there thinking 'Oh god not the sixth time I've heard this.'

"So it was quite hard taking my mind off what was actually happening.

"I had no choice but to go to the toilet there and then."

Staying awake throughout the whole night, it was only when care worker husband Francesco, 61, returned from an overnight shift at 10.30am she was finally set free.

"As soon as I saw Francesco it was the biggest sigh of relief," she said.

"He then lifted it up as quick as he could.

"There was just this massive dent in my arm.

"Then it started swelling up like a football and just burst. It was terrible.

"I don't even know if I'll get full control of my left arm back. It's just a waiting game at the moment." 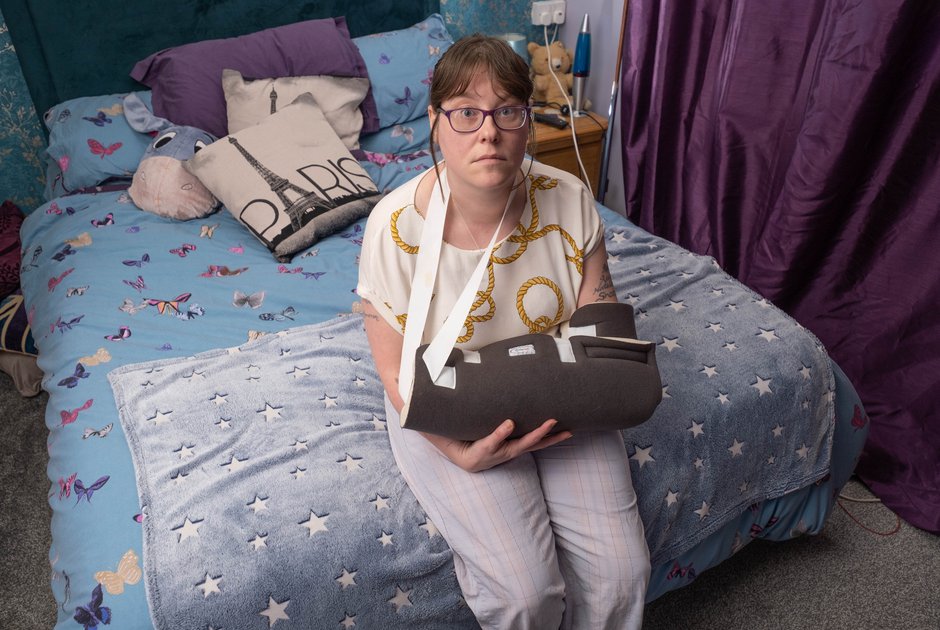 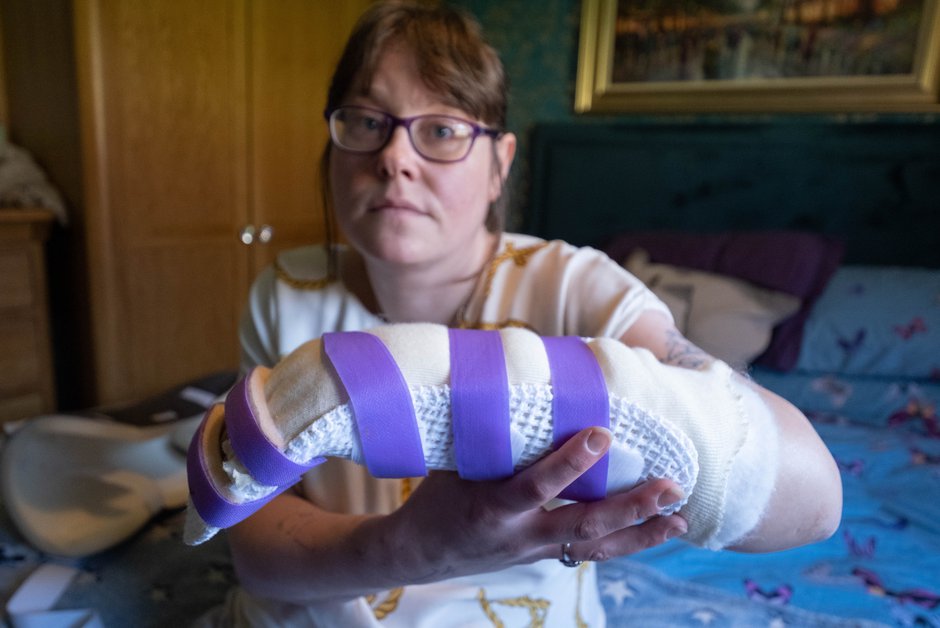 Husband Francesco added: "I just couldn't believe it when I saw her.

"I knew something was up when I walked in and all the lights were on and the TV was on.

"When I left to go to work she didn't seem ill so I thought it was weird she would have gone to bed without turning everything off.

"Then I saw her and I was swearing like anything. I just couldn't believe it.

"I lifted up the bed and when she got her arm out it was flat.

"I've never seen an arm go that flat before."

Claire was rushed to Royal Derby hospital and was kept in for a two week stay and underwent four operations.

Doctors performed a skin graft using skin from her thigh.

She had a muscle removed and doctors told her there is a 50:50 chance she will regain movement in her left arm, she said.

"I've got a splint on it and I can't feel anything.

"If that wasn't in there my arm would just be a floppy mess.

"I'm having to do everything with my right arm.

"I can't wash or do basic things by myself.

"I've had to get Franco to start tying my hair up. But to be fair for a first attempt he doesn't do a bad job.

"He's been absolutely brilliant. I don't know what I'd do without him.

"He's being going back and forth from work cooking me meals and looking after me.

"I want to thank the surgeons and the staff at Royal Derby hospital too. They've been great.

"We bought it from a warehouse a few years back for £800 and have never had any issues.

"When I was in hospital Franco took a sledgehammer to it.

"There's no way we'll be using one of them again. We'll have to find somewhere else to keep our Christmas decorations.

"I just want to warn people about buying these kinds of beds.

"They can be death traps.

"If it were a kid they'd be locked in there like a coffin."