This pet raccoon rides in a boat, uses a litter box and is best friends with a golden retriever

Meet Rebel - the pet raccoon who rides in a boat, uses a litter box and is best friends with a golden retriever 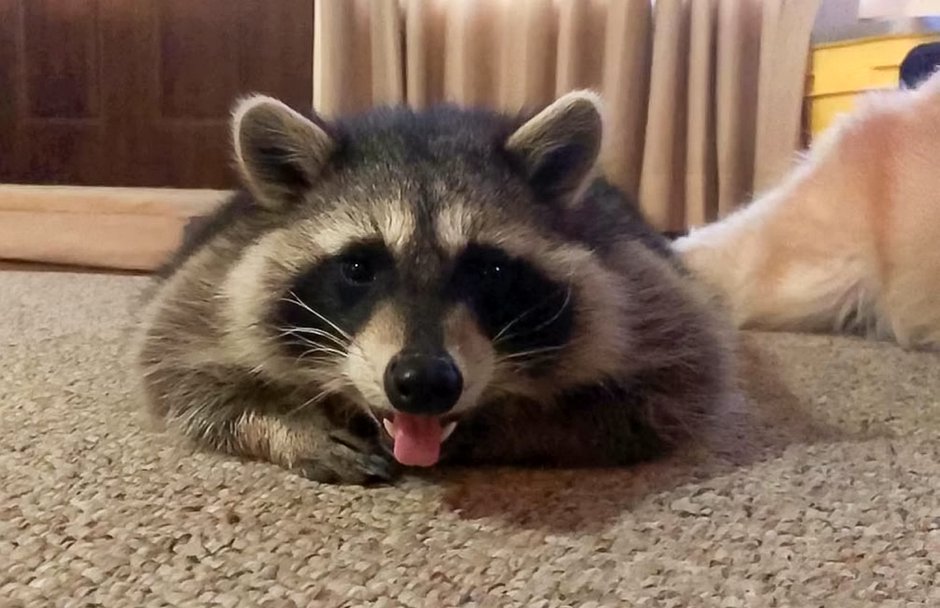 Meet Rebel - the pet raccoon who rides in a boat, uses a litter box and is best friends with a golden retriever.

“For most people, a raccoon is not a good pet,” said Rebel’s owner, Caryn Williamson, 44, who lives in Hudson, Indiana.

“They require constant supervision and they are so much more intelligent than a dog or cat.

“They can literally unlock your front door and walk right out.”

“But he also answers to Booby or Booby Baby or Boobear,” said Caryn, who is the manager of an HVAC company for heating, ventilation, and air conditioning.

“Most raccoons won’t answer to their owners but he will answer me and come when I call him, it’s pretty cool!”

Caryn says she adopted Rebel, who will be a year old in April, from a breeder in Ohio via the United States Department of Agriculture.

“I got him September 9th of 2019 and I’m currently on the list for a baby raccoon, from the breeder.

“We got him from a young couple when he was just under five months old.

“Exotic pets like raccoons can’t be brought to a shelter or humane society and they can never be released into the wild.

“They are euthanized unless you can find someone willing to adopt them. We took on the challenge!”

“Rebel and our dog Remington get along great.

“They are best friends, so much so that when Remington goes outside, Rebel paces back and forth at the door chattering until his friend is back.” 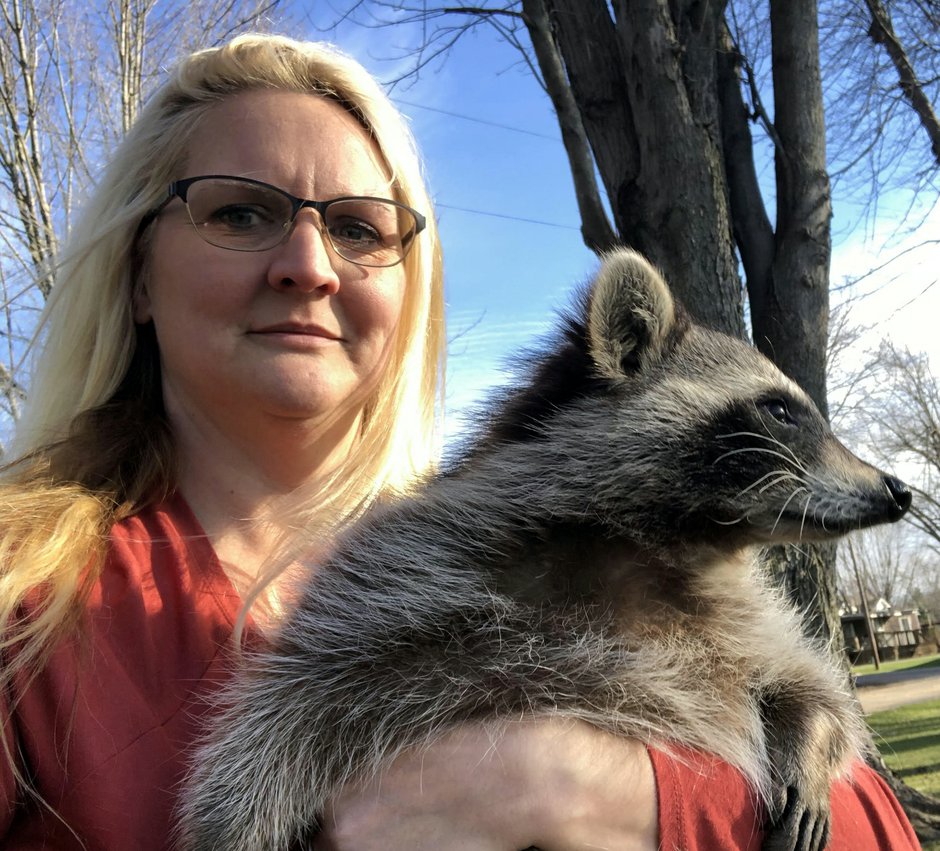 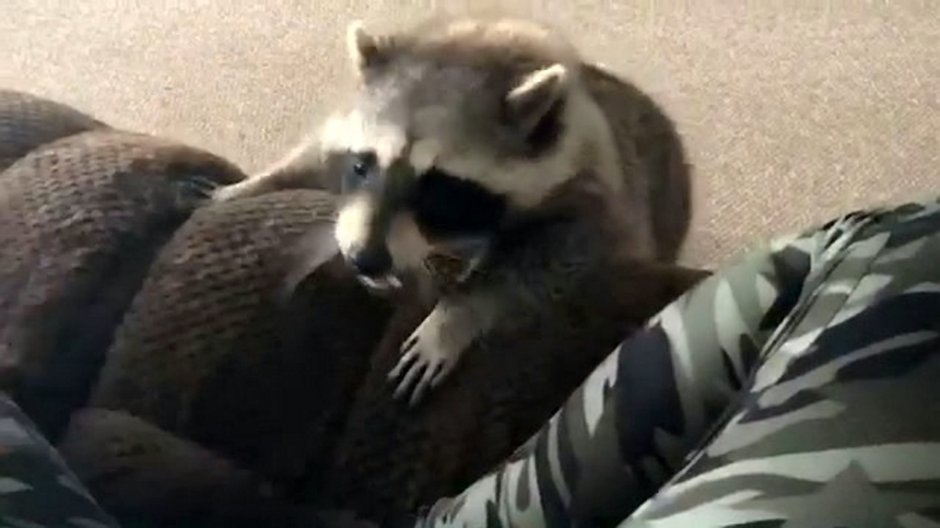 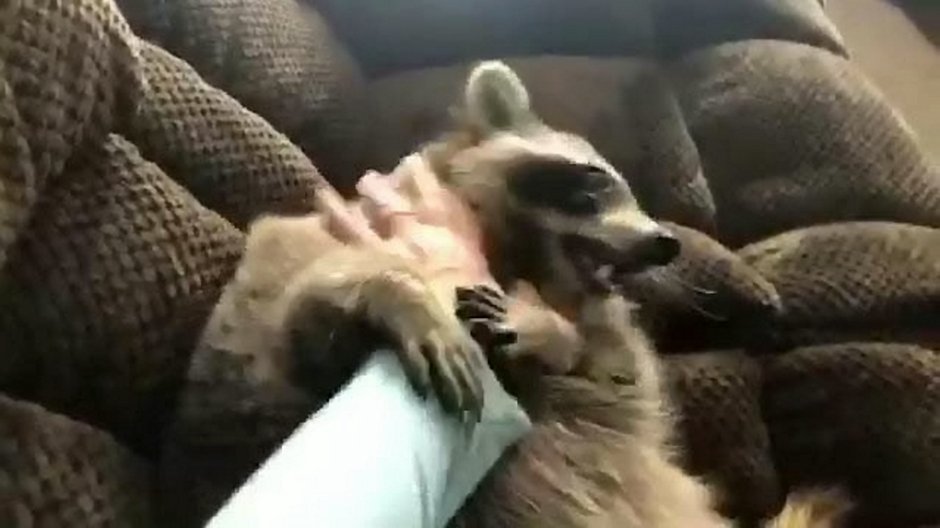 As for Rebel’s day-to-day care, Caryn confirmed that raising a raccoon comes with certain complications.

“Raccoons are pack animals so being alone is not good for them,” she said.

“They need either animal or human companionship at all times.

“Rebel lives indoors at all times unless he is outside under our supervision. We live on a lake, and he goes for boat rides all summer. He is neutered, and has all recommended vaccines, and regular veterinary check ups.

“In order to maintain our exotic pet permit we are required to have vet checks and home checks by the Department of Natural Resources (DNR).

“Raccoons can’t live in cages. They get too stressed. But we do have to have a safe place to put him away and secure him for our permit.

“He has a Critter Nation enclosure that has a hammock in it that he likes to sleep in, and he goes in there when he wants to be left alone.

“He also has a feeding cage. Raccoons are messy eaters so I stay a step ahead.

“Raccoons eat what we eat, it’s a balance of meat and protein and fruits and vegetables.

“He loves eggs, and eats one every day for breakfast. He also gets a raw chicken leg once a week and eats it bone and all.”

Caryn’s lifestyle in rural Indiana allows her to keep Rebel without incident, but she doesn’t believe the species is ready to be fully domesticated.

“Maybe in a few hundred years,” she said.

“Rebel uses a litter box just like a cat and they are trainable to an extent, but raccoons are very stubborn and will only listen to commands when they want to.

“To live with a raccoon you must live on their time and their schedule. I have a very flexible schedule, so it works…but it wouldn’t work for the average person.

“Living with a raccoon is learning their moods and body language. It’s a daily struggle to entertain them.

“But the cuteness and love they exude far outweighs the trouble and mischief they cause.”