Pte James Rose, of 2 YORKS, had both legs blown off by an undetected riverside IED during a foot patrol in Afghanistan in 2009 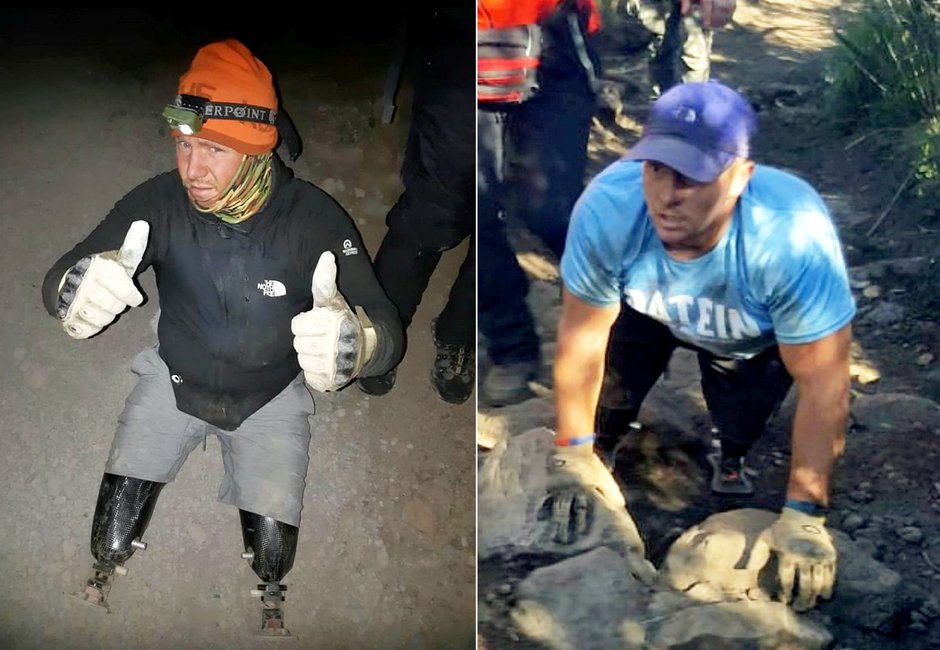 A British Army hero has become the first unaided double above the knee amputee to reach the top of Mount Kilimanjaro.

Private James Rose, 32, lost both legs to an undetected riverside IED during a foot patrol in Afghanistan in 2009.

Suffering with PTSD, the injured vet threw himself into competitive sports like volleyball and wheelchair basketball, even winning Invictus Games medals.

James swapped his wheelchair for 'stubbies' - very short prosthetics for above-the-knee amputees - and trained for six months this year.

Former 2 YORKS soldier James climbed for up to 15 hours-a-day on his hands and 'stubbies' for five days to reach the summit of the 19,341ft mountain, earlier this month.

Married James, from Middlesbrough, north Yorks., said: "The entire time, I was basically on my hands and knees crawling.

"I would be crawling up different parts of Kilimanjaro for around 12 hours a day, eating things like pasta and rice throughout the day.

"The first four days were regular hours - from around eight until eight.

"But the last day was the hardest because the terrain on the final ascent was mostly gravel - so the earth was slipping away from under me.

"A couple of time, I really didn't think that I'd make it. But I got my head down, had a good team around me, and got on with it.

"Something clicks inside you when you feel nearly defeated, and I'm relieved that I had the strength to keep going."

James stepped on an undetected explosive in Gereshk in Helmand province, Afghanistan, in November 2009.

His right leg was torn off instantly, and - though doctors tried to save his left leg - he had two double above-the-knee amputations.

James was medically discharged from the Army in April 2014, and married wife Naiomi [corr] and became a first-time father.

Last year he competed at the Invictus Games in Australia, winning silver and bronze medals in sitting volleyball and wheelchair basketball.

Posting to Facebook about being inspired by the programme, best pal Darren Young replied to say - "Hey, why don't we climb Kilimanjaro?"

James said: "At first, I wasn't really sure if he was serious or not. But after he'd planned the route for a couple of months, I thought about it more.

"I decided that climbing Kilimanjaro would be a great way of encouraging others suffering with mental health problems to come out of their shell.

"Last year, I competed at the Invictus Games in wheelchair basketball and sitting volleyball - and won medals for them.

"After my experience overseas, I'd spent several years rehabilitating, and one way of doing that was throwing myself into sports.

"So the jump from all that to mountain climbing wasn't actually too drastic."

He did two hours of cardio and weight for around five days-a-week between January and July - and used an altitude generator for five hours-a-day at home.

James climbed in the Lake District with Darren for practice, crawling up Helvellyn (3,117 ft).

They set off for Tanzania on September 8, and began their five-day trek across - and up - Africa's highest mountain range on two days later.

Enduring highs of 30°C during the day and lows of -10°C at night, blistering winds and monkeys en route. 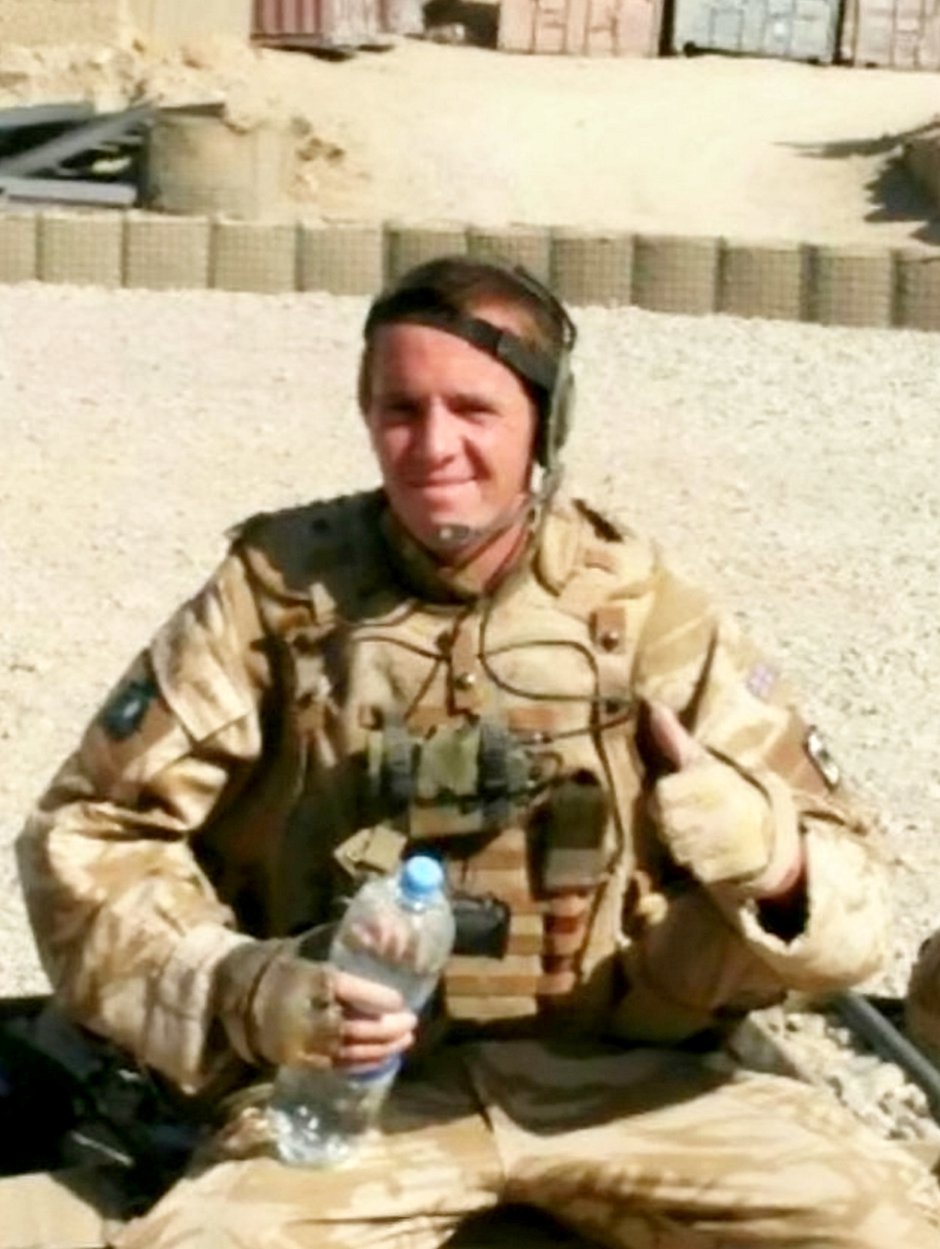 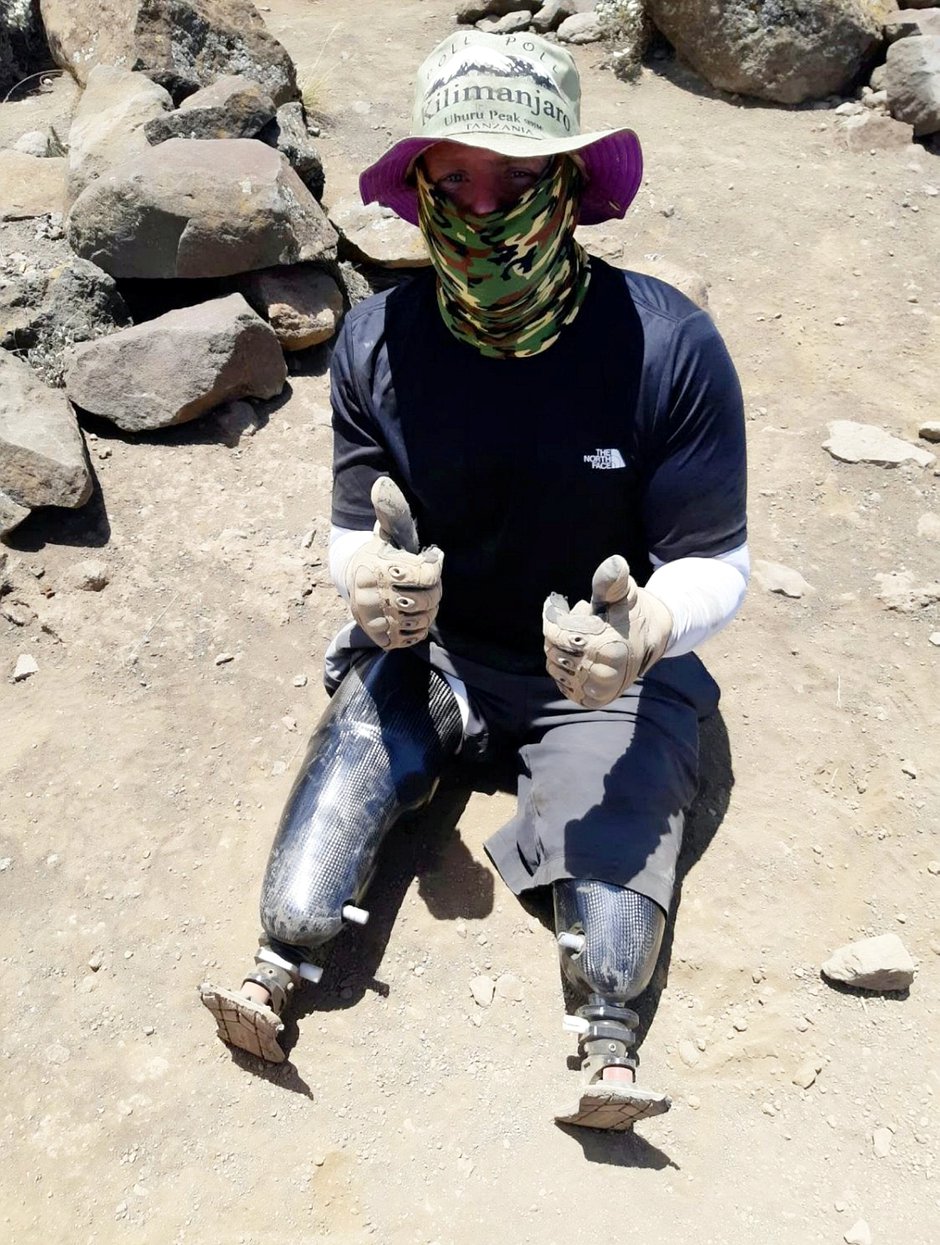 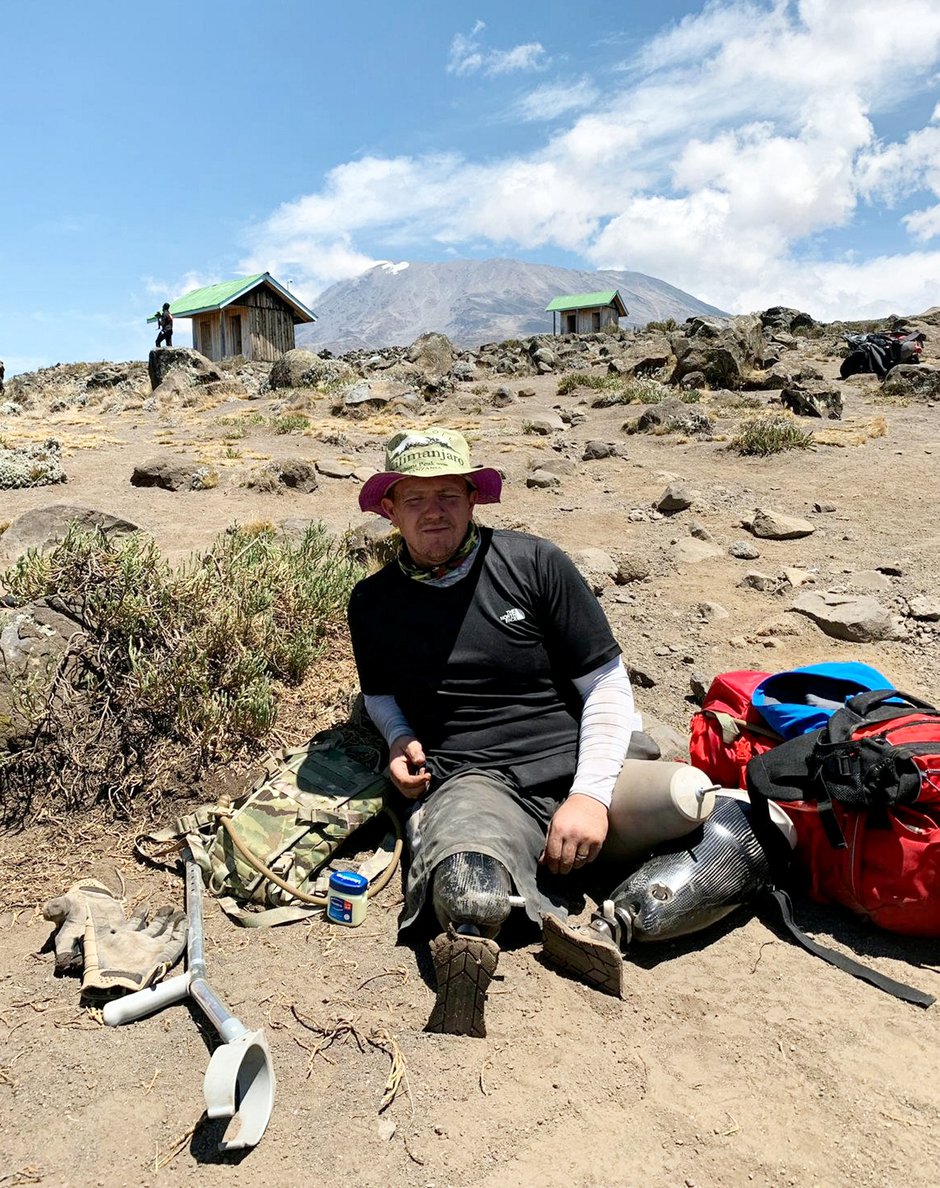 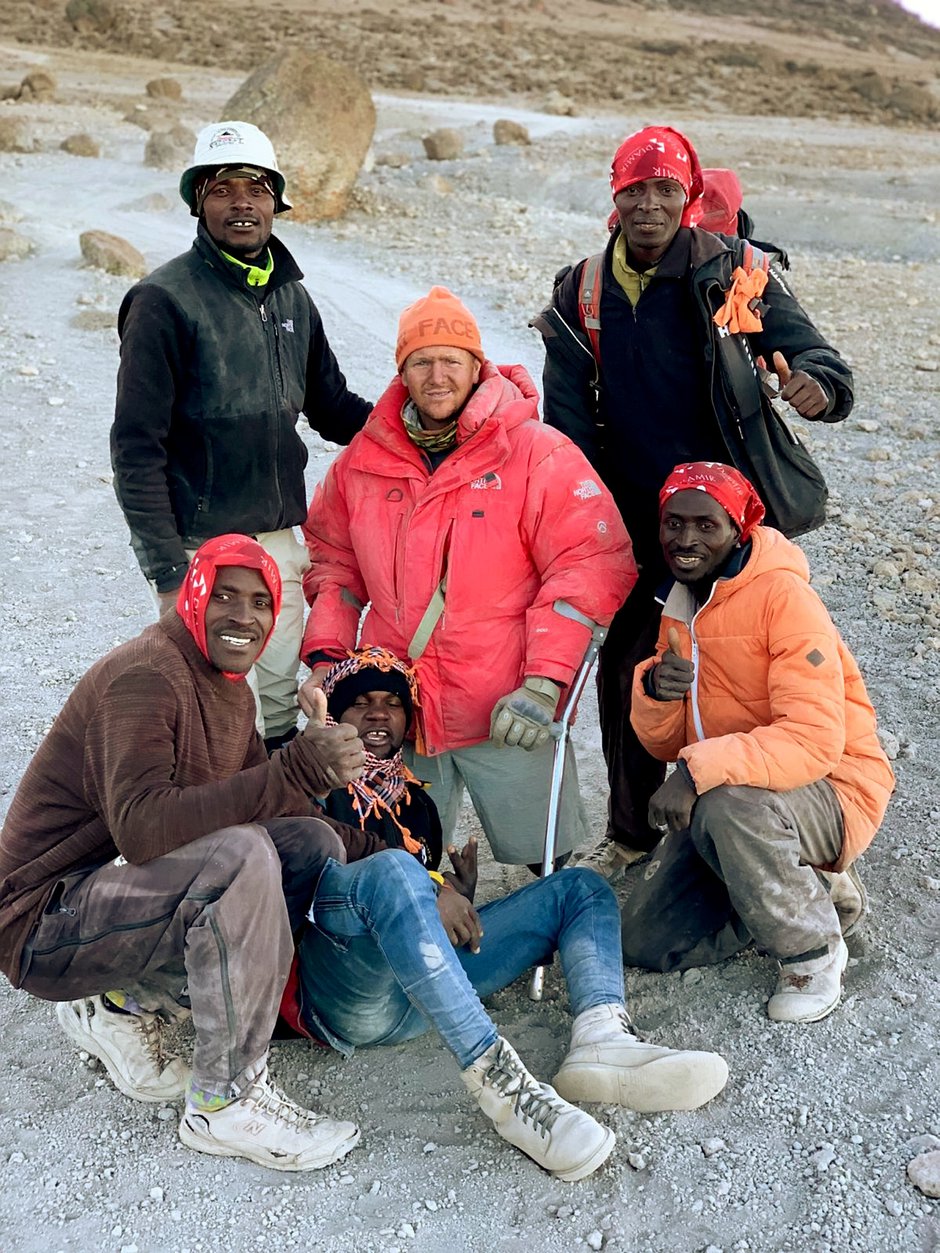 James trekked along the ancient Marangu route, which crosses The Saddle, a three-mile wide, high-altitude, semi-desert that separates craggy Mawenzi from the main summit Kibo.

From the summit, glaciers, screes, cliffs, afro-alpine moorland, and forests lead down to the cultivated foothills.

Accompanied by five mountain guides, he fed off a strictly high-protein, high-carb diet - mostly pasta, rice, and chicken, he said.

On the final ascent to Gilman's Point on Saturday September 14 James climbed for 15 hours an astonishing 3,000ft.

From the top, James described the panoramic view as "one of the most awe-inspiring sights that I've ever seen in my life".

He said: "It looks a little like when you're in an airplane and you're coming in to land - you can see towns and roads ahead.

"Well, it was a bit like that, but more beautiful, and so tranquil.

"The weather conditions on that last day were perfect for getting good pictures. It was clear blue sky, so we could see for miles around.

"The hardest day, by far, was the last day. We set off at around two in the morning, and climbed for about 15 hours almost non-stop.

"I stopped twice on that last part, and didn't think I'd get through it.

"I openly talked of giving up, and climbing back down - or letting the guys from my team aiding me, basically carry me.

"But I didn't want that to happen. I'd set myself the goal of becoming the first double above-the-knee amputee to climb Kilimanjaro unaided.

"And I'm so glad I persevered - because otherwise I'd have sunk into a dark hole."

James' ambitions are high - and plans to scale Mt Everest in the near future.