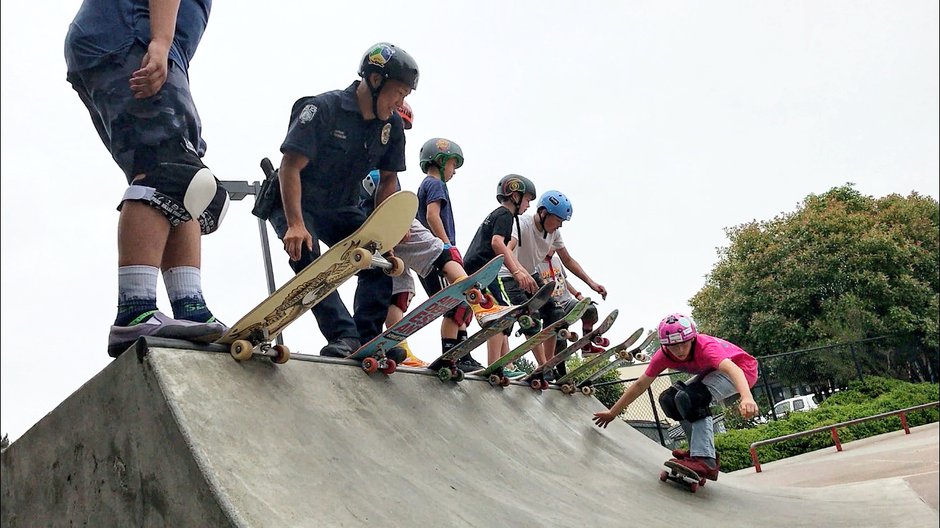 Meet the “the coolest cop ever” a skateboarding police officer who is a star at the skatepark - in full uniform.

Officer Craig Hanaumi skates in full uniform, shredding at the skatepark with with the kids of Bellevue, Washington, USA.

“I always have my skateboard in cop car,” said Hanaumi, 44, who has been working in law enforcement for 16 years.

Hanaumi has been skating since he was a little kid growing up in 1980s Hawaii, but he took a 25 year break to train to be a cop and move to Washington.

In 2015 he got a nuisance call about skaters doing tricks in the parking lot of a bank.

Before he politely escorted them off the property Hanaumi asked the kids what tricks they were doing and even tested out one of their boards.

A video of the interaction hit YouTube, gathering over 150,000 views with comments calling Hanaumi the “coolest cop ever.”

“When I was a kid the only contact I had with cops was when they were kicking us out of places for skating, which is fair enough,” he said.

“But now the kids in our community...their first contact with a cop might be to actually skate with one.

“We want people to forget the uniform, I would hope that skating helps to humanize the badge.

“When I can show up to the park and have people acknowledge that, other than the uniform, I’m just an old guy skateboarding, then I have succeeded.”

Hanaumi now hits the skate park every week, does flips off his cop car and, occasionally, he even skates around the police station.

“There aren’t too many good spots in the police station, it’s all flat ground, there are much better places in the city to skate - we have three world class skate parks in this city,” he joked.

“I try to share the aloha spirit in every interaction I have,” he said.

Adding: “I’m not that good at skating, I’m good for a 44-year-old police officer, if there was a category for that I’d be ok!

“I actually haven’t improved much at skating since I was nine-years-old, but I haven’t got worse either, so that’s good.

“I don’t think the kids are that impressed by my skill, but I think they appreciate that I am out there doing it, I’m not trying to show off." 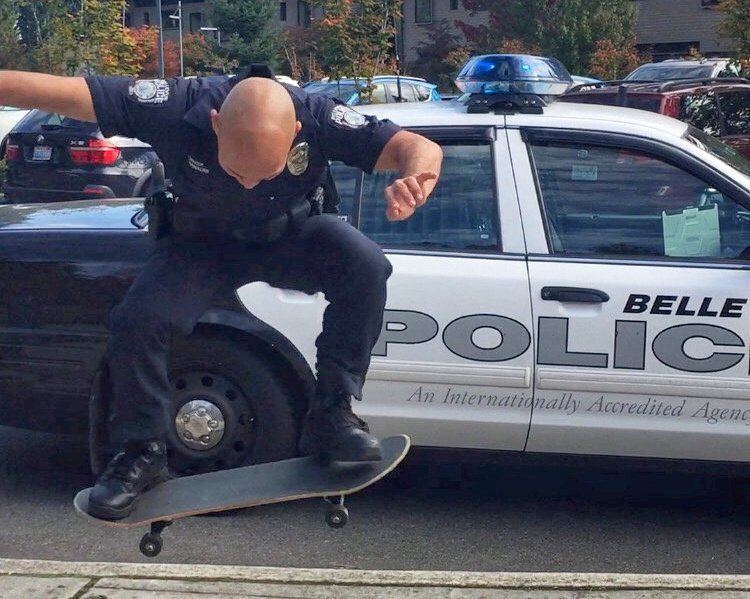 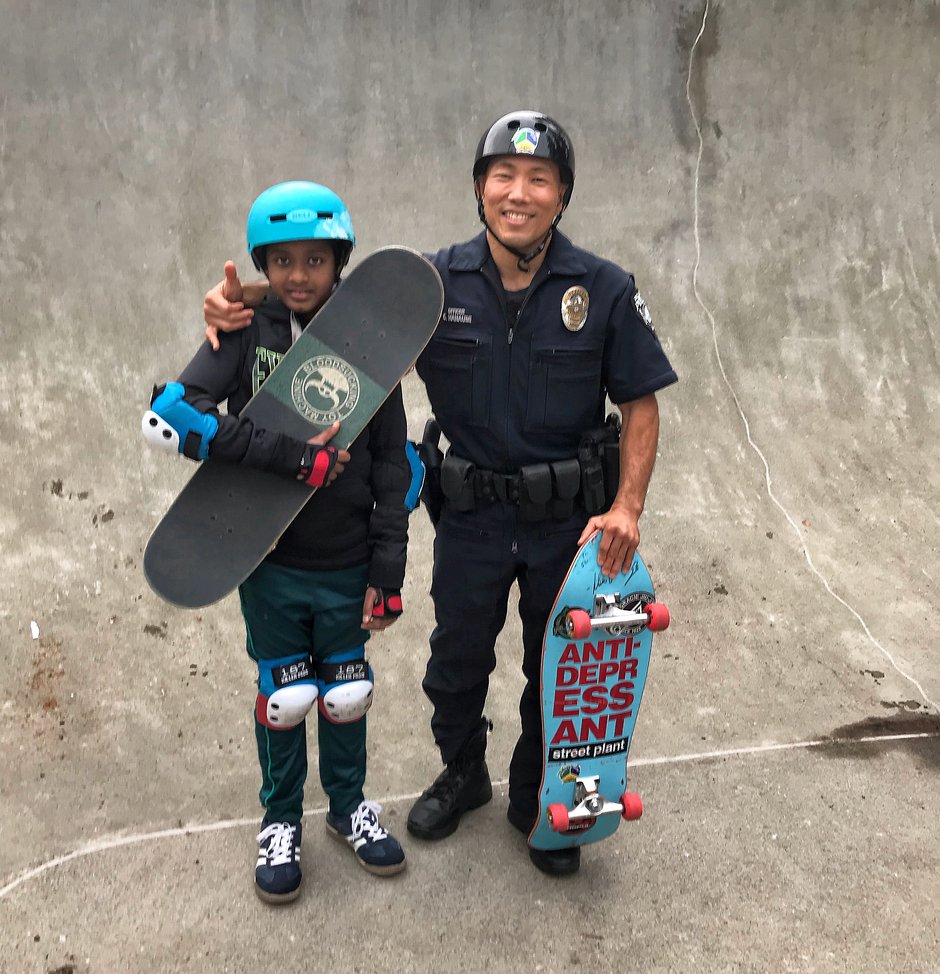 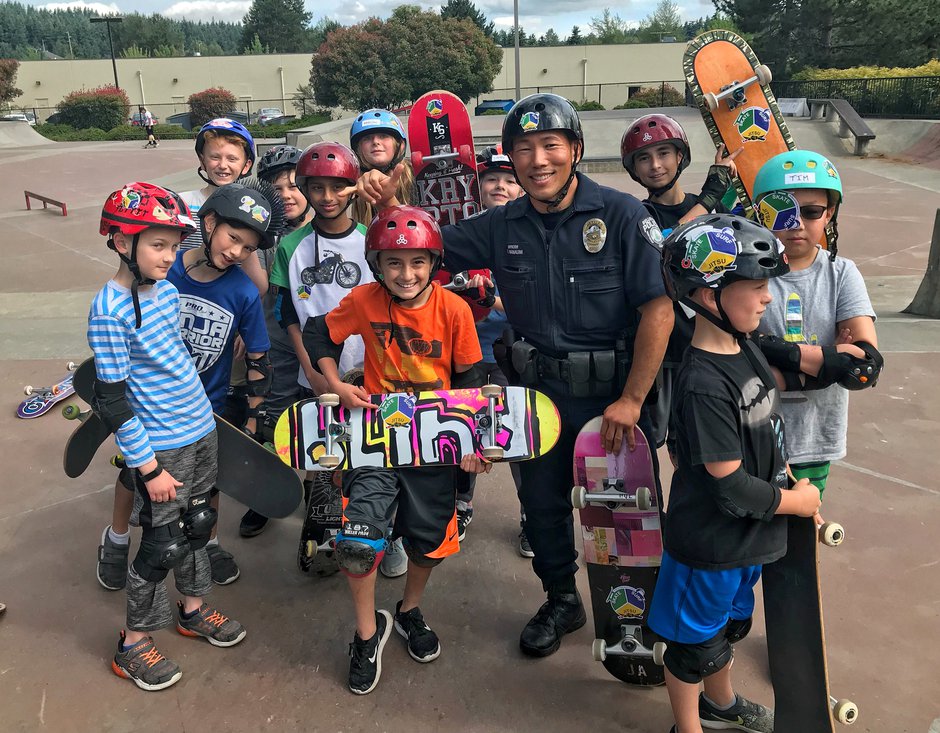 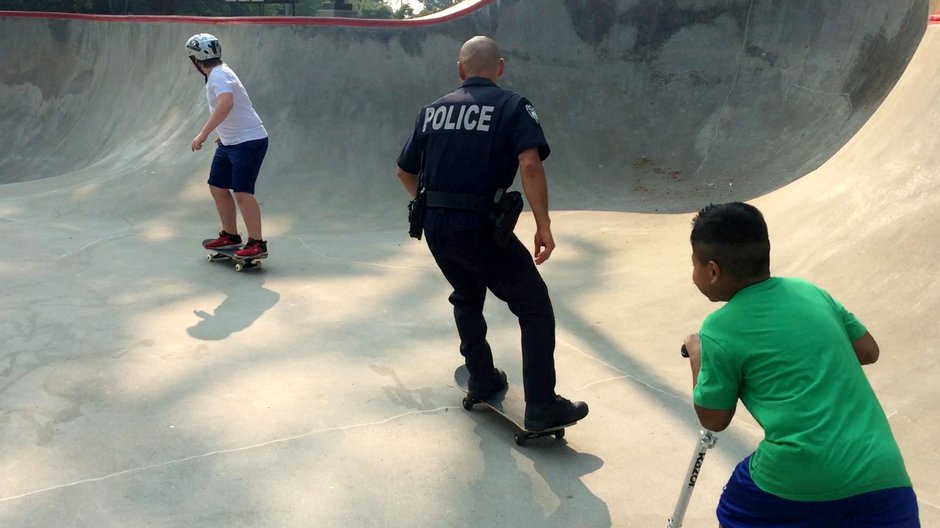 Like most skaters, Hanaumi isn’t too afraid of getting hurt.

“I have had a lot of accidents and injuries, you can’t be a skateboarder without having injuries, it’s impossible,” he said.

“You have to fall down thousands of times to gain any kind of proficiency, you can’t get around that, you have to keep getting back up.

“The scars and abrasions you get from skateboarding are like badges you wear with a bit of honor.

“In 2016 I attempted to drop in on a Vert Ramp and I slammed twice, really, really hard both times, that hurt so much, my hip and my front elbow were so bruised!

“A video of it got shared on Thrasher magazine’s Instagram, that's like the bible for skaters, it was very funny.

"After that I knew I had to go back and try and get it right. I got there in the end!

“The skateboarding mindset is that you keep doing it until you get it right.”

Despite the bumps and bruises Hanaumi’s superiors are very supportive of his activities.

“I’ve had really fantastic bosses over the years. However my current supervisor Sgt Ben Jones took it to the next level.

"Not only does he support the skate outreach, he’s out there skating with me whenever he can. It’s fantastic.

“We have city-run skate camps, how cool is that?”

Hanaumi uses a board made by the acclaimed skate company Street Plant, run by skate legend Mike Vallely, who is also the lead singer of the hardcore punk band Black Flag.

“Mike Vallely actually donated ten boards which we gave away to kids in the community,” said Hanaumi.

“For someone of his stature to collaborate with someone in law enforcement was very significant.

“He has such a great ethos, he’s always said that skateboarding is for everyone who gets on a board, it doesn’t matter who you are, or how good you are.