FLIGHT THEN FIGHT - Seven Brits were bundled off a budget flight after it made an emergency landing following a row between passengers - with one allegedly SPITTING at a woman, witnesses say 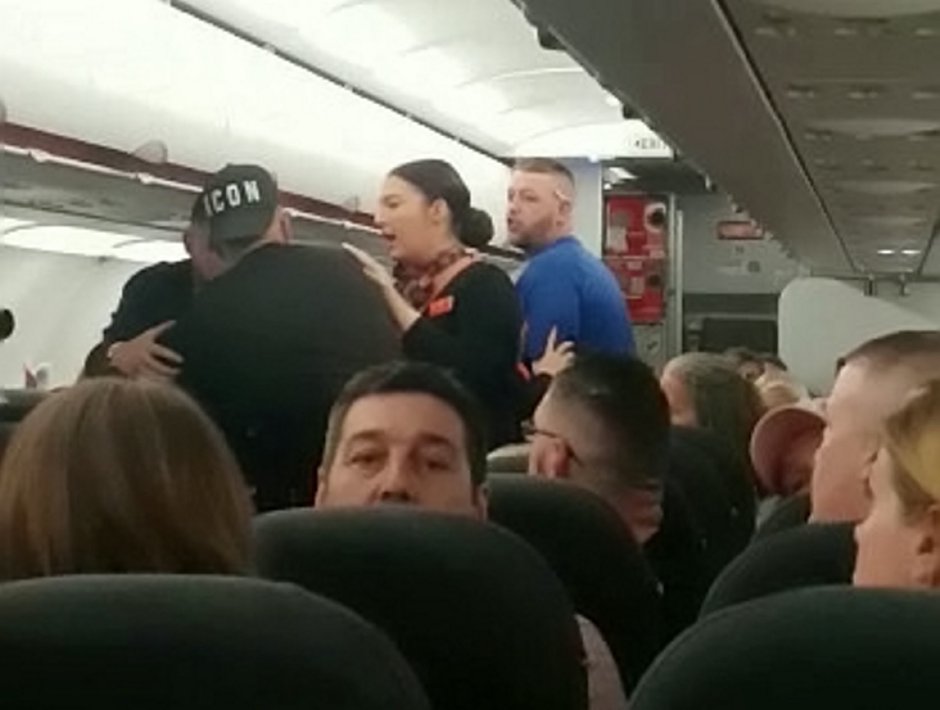 Seven Brits were bundled off a budget flight after it made an emergency landing following a row between passengers - with one SPITTING at a woman, witnesses say.

Onlookers claim two groups of lads forced the easyjet flight from Manchester to Tenerife on Thursday (3) to divert to Portugal after a bust up.

The ruckus is said to have broken out around two hours after the 5.35pm take-off, when a group of four sat at the back started punching each other.

An air stewardess broke up the fight, and seated one of the rowdy guys at the front of the airliner in an effort to calm tensions.

Minutes later, though, the man vaulted back to his pals - where things kicked off again.

Passengers then tried to break up the fight, leading to the moment one of the lads apparently spat in a woman's eye.

As a girl shrieks, a woman shouts: "There's children on the airplane!"

One man can be heard saying: "He f**king spat on a woman - dirty bastard!"

At this moment, the captain announced plans to divert the plane and make an emergency landing in Faro, Portugal.

Key eyewitness Nathan Belford, 30, said a 10-man stag party then "howled with rage" and picked a fight with both cabin crew and the group of four.

He said the stag party "complained bitterly to the stewardess" - and even "started pinching drinks from the front of the plane".

Landing in Portugal at around 8pm, security then bundled seven men - all from the four-man group, three from the stag party - off the plane. 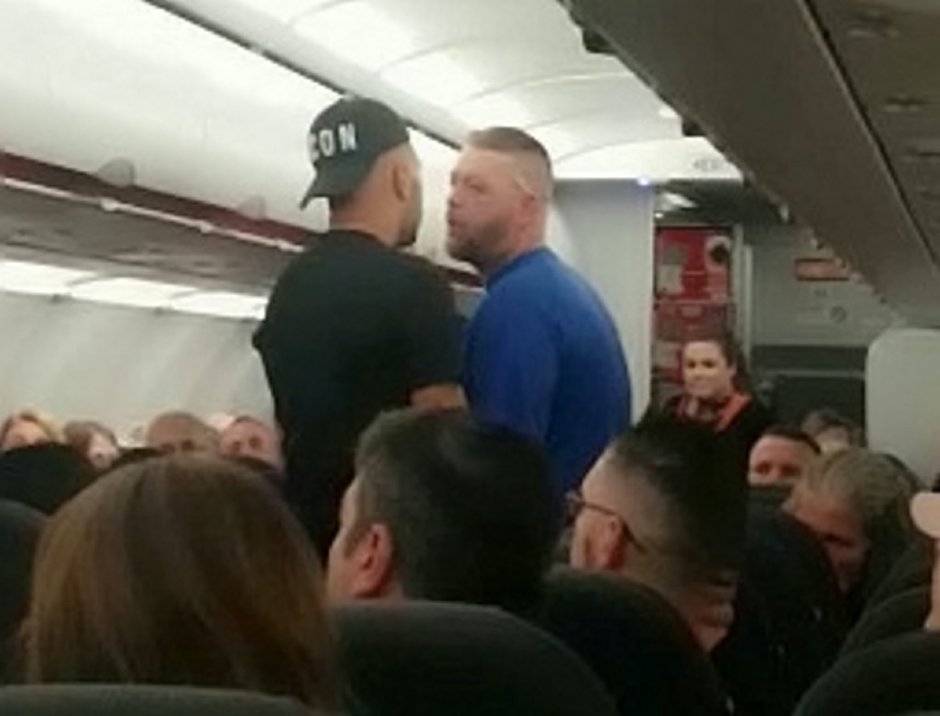 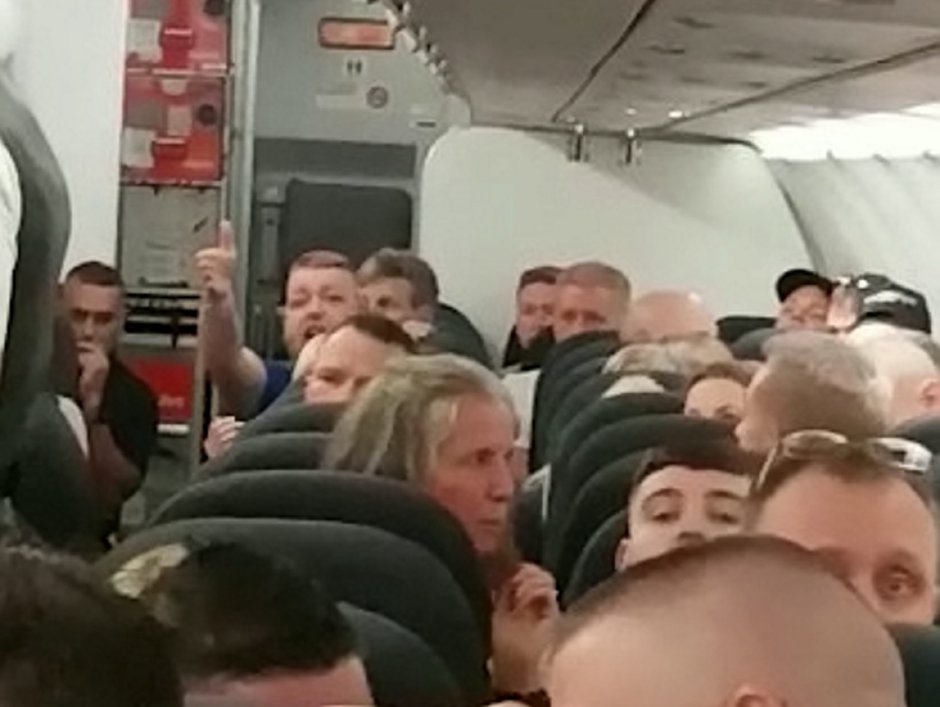 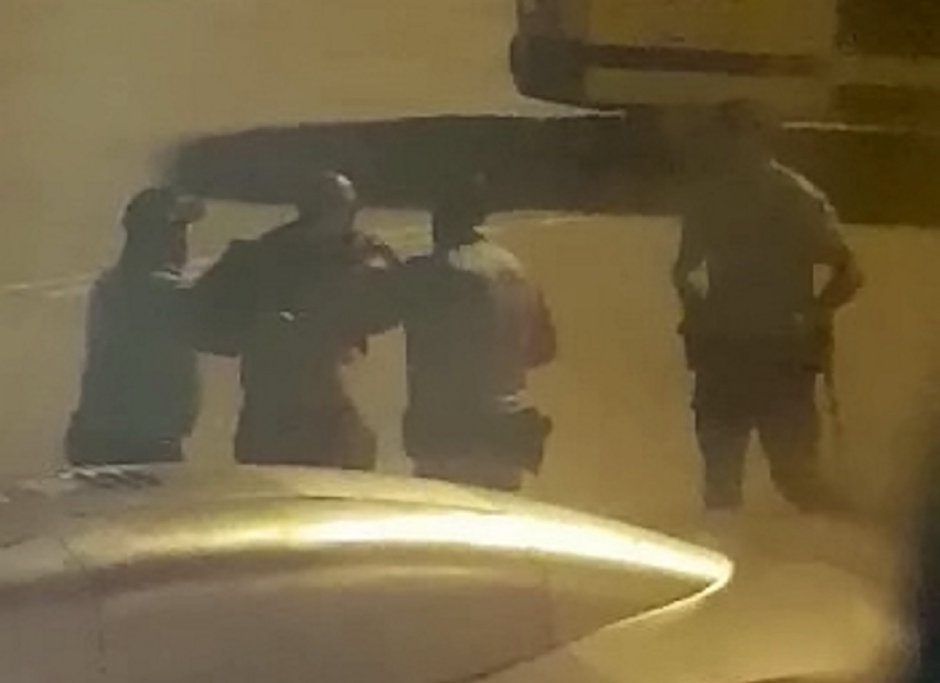 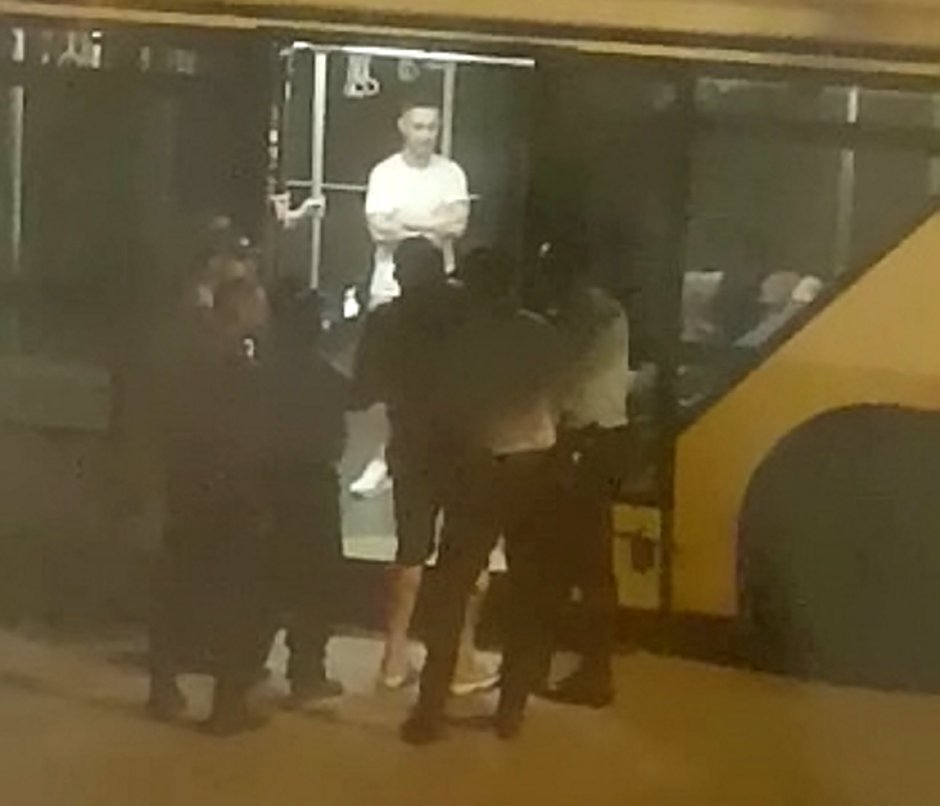 Two hours later, the plane completed its journey to Tenerife.

Fed-up Nathan, of Stoke-on-Trent, said: "We couldn't believe what was happening. We just wanted to go on holiday.

"Things first kicked off when the group at the back got into a fight. Punches were thrown, and the stewardess broke them up.

"But then they kicked off again, and passengers actually intervened to calm them down.

"One woman got in the way, but a guy spat in her eye. It was disgusting.

"After that, cabin decided to divert to Portugal. Then things escalated after the bigger stag party howled with rage about it.

"They picked a fight with cabin crew and with the group of four, complaining that they should be going to Tenerife for their weekend.

"One of the guys got into trouble when he started pinching drinks from the front of the plane. It was Bedlam.

"Once we landed, though, security got them off. It was impressive - one of the guys they had to carry off was at least six-foot-six."

easyJet has confirmed the incident took place on one of its flights.

It is still unclear why Jet2 also confirmed it but it was an easyJet flight.

An easyJet spokesman said: “We can confirm that flight EZY1903 from Manchester to Tenerife on 3 October diverted to Faro as a result of some passengers on board behaving disruptively and was met by police on arrival.

''The passengers were removed by police and the aircraft continued onto Tenerife.

"easyJet’s cabin crew are trained to assess and evaluate all situations and to act quickly and appropriately to ensure that the safety of the flight and other passengers is not compromised at any time.

"Whilst such incidents are rare, we take them very seriously, and do not tolerate abusive or threatening behaviour on board.

''The safety and wellbeing of customers and crew is our highest priority.