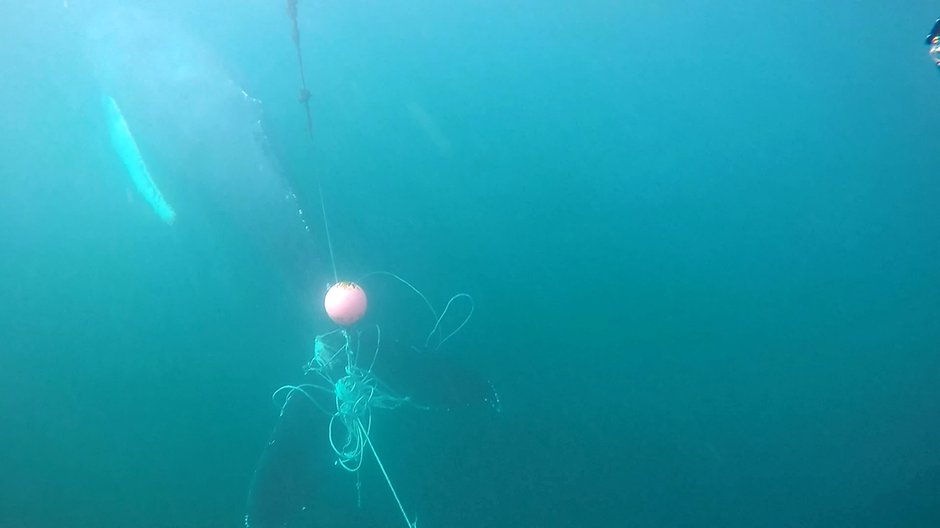 This the incredible moment volunteers rescued an exhausted humpback whale being dragged to the seabed by a lobster pot.

The 12m long adult was left fighting for its life after it got its tail caught on fishing gear off Orkney in Scotland.

The majestic mammal had spent at days - potentially up to a week - battling to keep its blowhole above water, but was fast losing its fight when volunteers arrived.

Video footage shows the cetacean - which could have travelled 4,500 miles from the Caribbean - fighting for its life.

Volunteers from British Divers Marine Life Rescue worked for hours - hanging off the side of boats with their heads in the water - to cut the terrified animal free.

And against the odds it survived the ordeal to swim off into the deep.

Volunteer Noel Hawkins, 49, from Ullapool, Ross and Cromarty, in the Highlands, said: "It was managing to lift its head up and down but it was quite distressed when we first got to it.

"It was trumpeting and breathing very fast. That noise you hear on the video isn't the boat - it's the whale exhaling.

"Once we started work it did begin to be more still.

"That seems to be a bit of a humpback trick. I like to think that's them knowing that they are getting help.

"It could have been there for up to a week. There was scarring on the tail and down its back. It had been pulling on it for a while."

The team were alerted by a fisherman who returned from holiday to find his lobster and crab pots off Westray Island had snared a whale.

Much to the relief of the British Divers Marine Life Rescue, he didn't try to free the whale himself, but got in touch with volunteers. 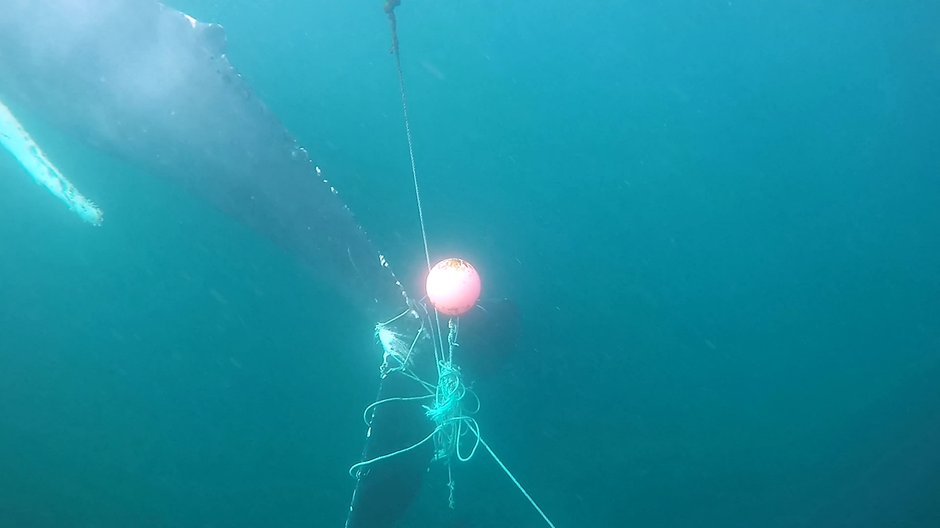 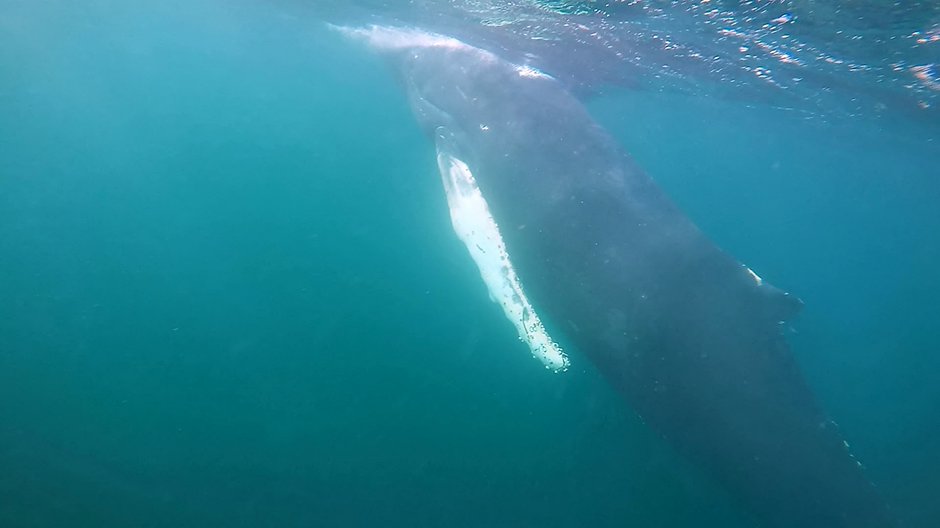 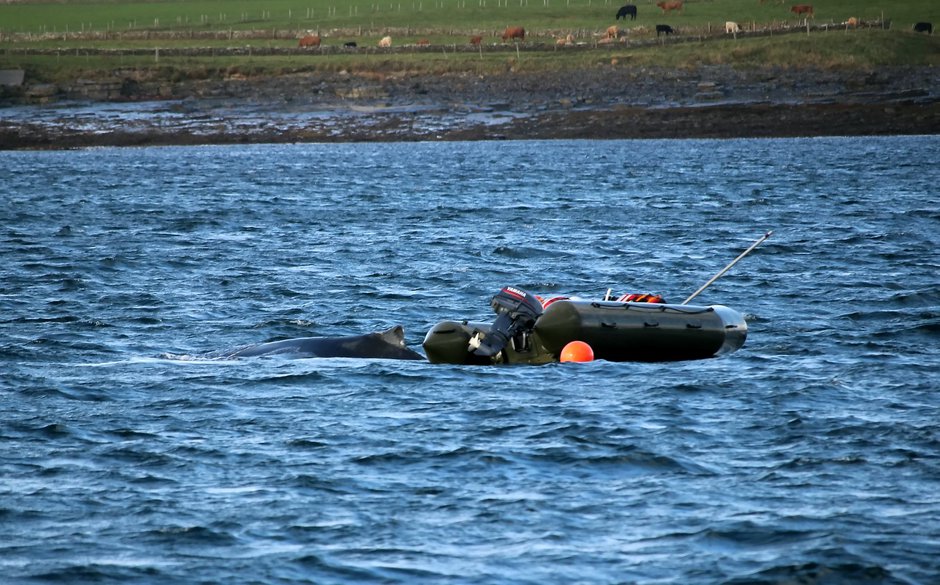 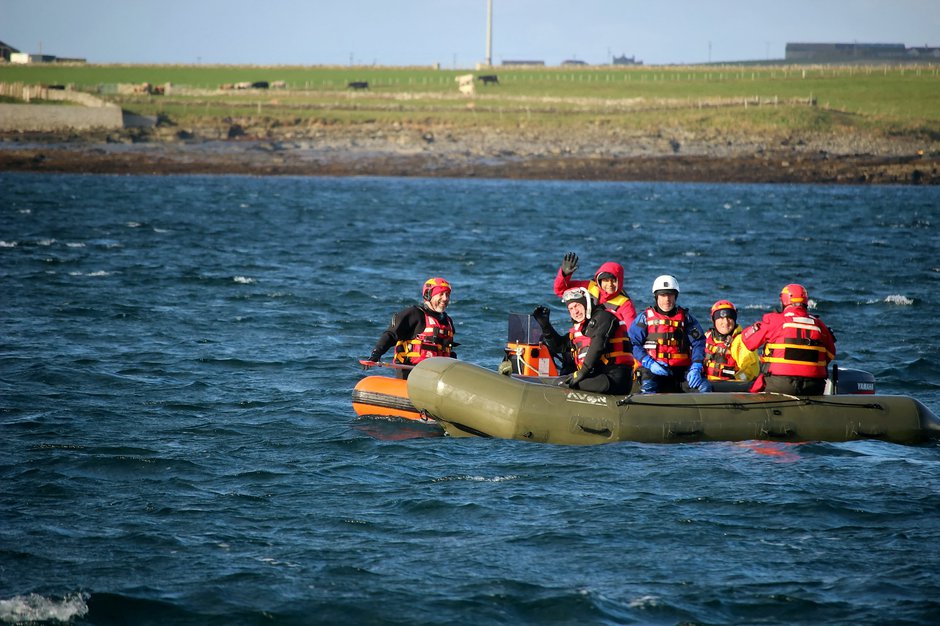 Members from across Scotland drove to the top of the country, before getting a ferry, then driving further and chartered a boat, to reach the animal on October 1.

It was strong enough to lift the weight just enough to get to the surface to breathe, but was fast running out of energy.

The team faced the challenge of getting close enough to rescue the animal, but having to stay safe.

It was too risky for the team to get in the water - in case they are caught up and dragged down with the freed whale - so they have to rescue the animal from the boat.

The team hung off the side of the boat with their heads in the water to get a better look.

Noel, a communities manager with the Scottish Wildlife Trust, cut the whale free, hanging in the water with a knife, while someone on the boat held his legs.

"This one was quite a straight forward rescue, in terms of it was just on the tail," he said.

"We had lots of local support. The fisherman himself was on hand to help us too."