Hatty the cat was stuck on the Brunel Bridge in Plymouth, Devon, and is thought to have been stranded there for six days 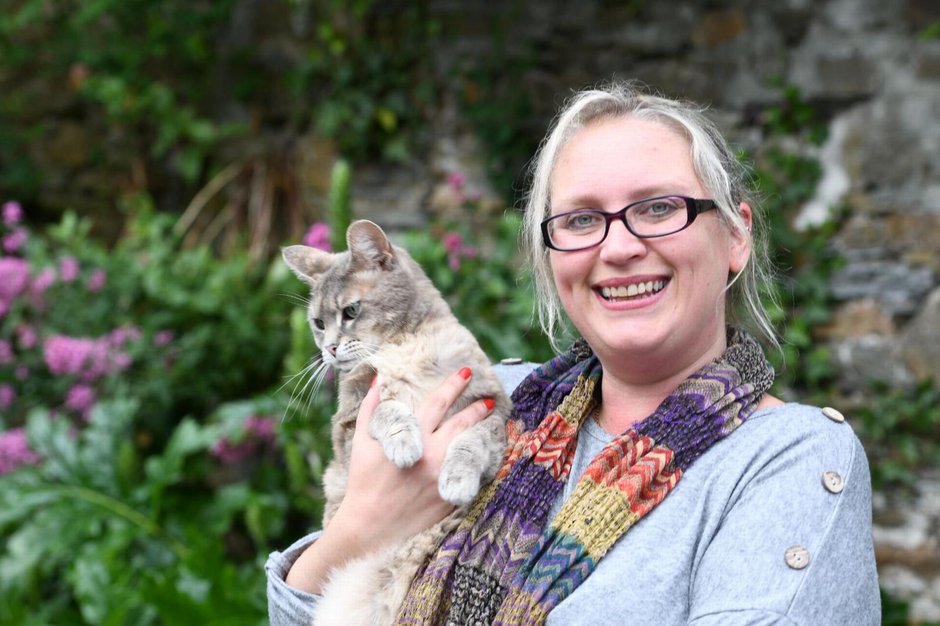 A cat at the centre of a £5K mission to save her from a bridge simply wandered home - hours after rescuers had left.

Hatty the five-year-old Maine Coon-Serengeti cross had been perched on a ledge of the 'Brunel bridge' in Plymouth, Devon - for six DAYS.

Thousands of people followed her plight online and as crowds gathered to help some even tried to send up food - with catapults.

Fire crews and the RSPCA were dispatched and Network Rail were making arrangements to close the rail line over the bridge.

Firefighters arrived on Wednesday lunchtime and prepared the ground before sending up a massive ladder.

One rescuer scaled to the top armed with a large bag and tried to tempt the feline out - with 'Dreamies' cat treats.

But they failed to coax Hatty and the cat was last seen peering out from behind a crevice under the famous bridge. 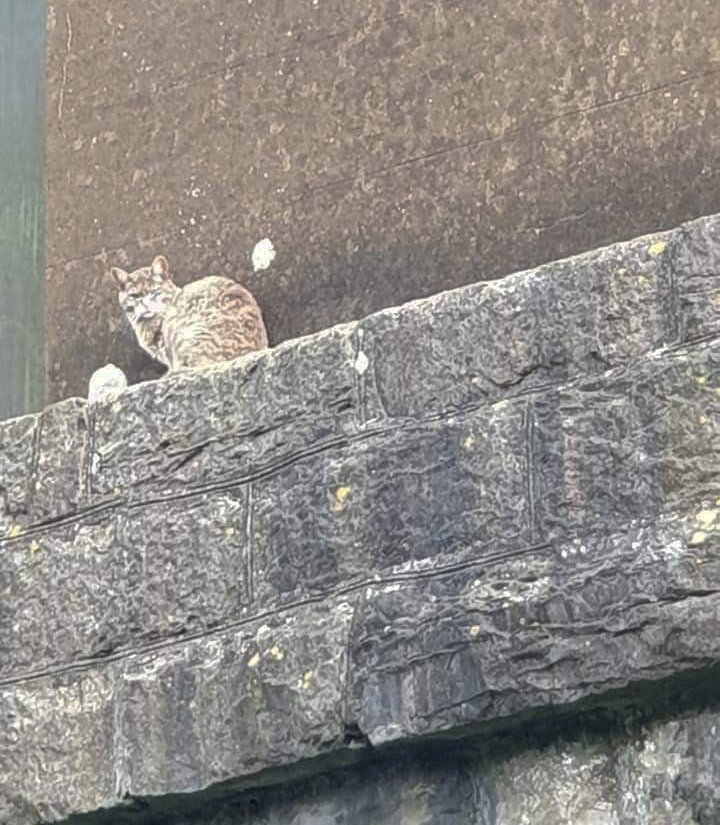 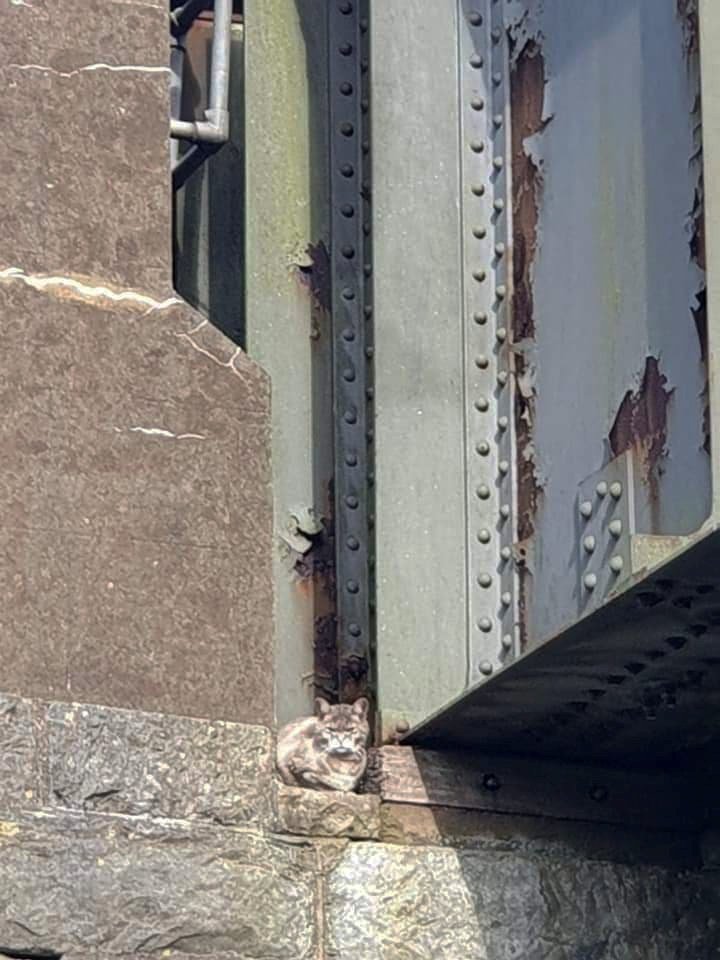 Fire crews eventually called off the rescue - which costs the taxpayer about £500 an hour - on Wednesday at 5pm and vowed to return the next day.

But at 11.30pm after everyone had left Hatty simply clambered down and suddenly appeared at home - with evidence she'd eaten a SEAGULL to stave off the hunger.

Owner Kirsty Howden, 39, of Saltash, Cornwall, said she was "shocked and elated" that her beloved pet, who initially went missing from her home on May 11, had returned.

The mother-of-three said she had been about to leave the house to meet Network Rail and RSPCA staff at 11.30pm on Wednesday to attempt a second rescue attempt.

It is thought the total cost the the rescue involving staff from fire crews, the RSPCA and Network rail was around £5,000.

She said: "I was sat responding to comments, heard a meow outside, had a look through the window and there she was.

"She is a bit skinny and smelly, very vocal and has now headed upstairs and put herself to bed."

She said that Hatty appeared to seem very pleased to see her two dogs, and there was "kisses all round".

Just hours earlier a major operation to rescue Hatty was called off for the night.

She is believed to have been stuck on the Royal Albert Bridge, known locally as the 'Brunel Bridge' since last Thursday and has been missing from her home for two weeks.

Firefighters spent most of the day trying to coax her down and there were countless visits from RSPCA inspectors.

There were also arrangements in place by Network Rail for the train lines to be closed.

It is understood that at a cost of around £500 an hour the total bill for the rescue efforts was around £5,000.

But it seems that the five-year-old feline didn't need rescuing at all and Kirsty says she walked in like nothing had happened.

The cat first hit the headlines on Tuesday evening when a picture emerged of her being on the Royal Albert Bridge, also known as the 'Brunel bridge' which connects Plymouth and Saltash.

These had been taken by Dawn Lapthorn, admin of the popular Facebook page Plymouth UK Pets Lost and Found.

Dawn had been contacted by Kirsty Howden, who had seen photos of her missing kitty on the page.

Both of the women attended the bridge in a bid to look for Hatty, but at around 9pm on Tuesday contacted the fire service for help.

On Wednesday morning, fire crews, Network Rail and RSPCA inspectors worked together to try and attempt to get Hatty off of the bridge.

Firefighters from Cornwall Fire and Rescue Service spent most of Wednesday trying to coax Hatty out of a nook in one of the bridge pillars.

Dreamies and fish were used in a bid to coax the cat out, but nothing was successful - although she did manage to capture a seagull.

This attempted rescue was called off at around 5pm and at that point, Hatty's owner Kirsty had spent the best part of ten hours down at the foot of the bridge waiting for her safe arrival.

There were plans for the RSPCA, firefighters and Network Rail to meet at 11.30pm on Wednesday evening to attempt a second rescue.

There were also plans to close a section of the railway in the early hours of this morning so firefighters could carry out the rescue from the railway tracks.

But neither were needed and after she returned home, Kirsty has thanked everyone who helped in attempting to rescue Hatty, as well as everyone who offered support.

She added: "I'd like to thank Dawn for going above and beyond, Jim from the RSPCA for all his help, Saltash fire crew for all their efforts.

"I'd also like to thank the people who have followed Hatty's story and the community in Saltash for rallying around, especially the ones who tried so hard to help get Hatty home."